Google is under pressure after missing earnings estimates 3 quarters in a row and is now facing an anti-trust suit from the European Union. Furthermore rising traffic acquisition costs (TAC) have been weighing on Google’s revenue growth. Sales have slowly been pushing higher in spite of rising traffic costs but since the start of last year the stock has gone nowhere (-2%). 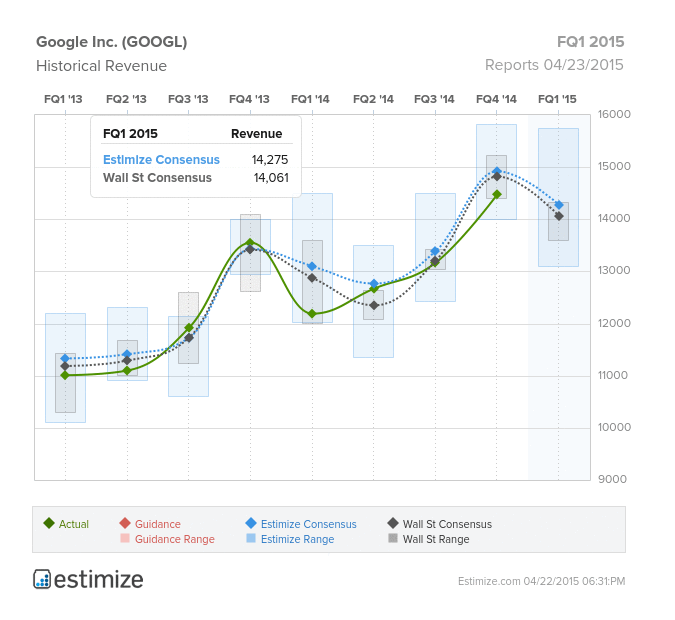 This quarter contributing analysts on Estimize expect Google’s revenue to pop 17% higher (after deducting TAC). That would be the largest year over year (yoy) improvement to revenue since the first quarter of 2013.

The Estimize consensus from 128 contributors is for Google to report revenue of $14.275 billion after subtracting out TAC. Wall Street’s forecast is 1.5% lower at $14.061 billion. 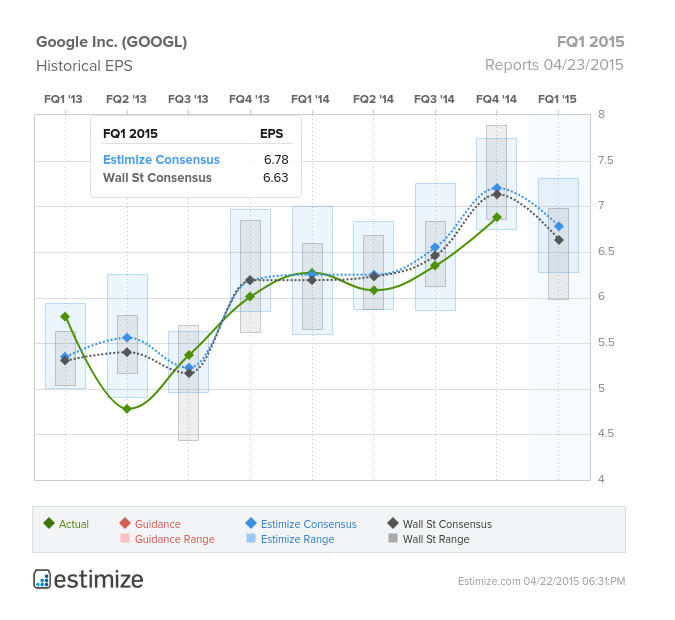 On the bottom line Estimize analysts are predicting $6.78 in earnings per share. That would be an 8% gain from the $6.26 reported in the first quarter of last year. Wall Street is forecasting that Google will earn $6.63 per share, a 6% improvement.

No earnings preview for a multinational is complete this season without a note on the effect of currency headwinds. The strong dollar means higher costs of repatriation for Google’s overseas revenue. On the bright side, Google has a currency hedging program which will offset some of the losses. In the fourth quarter of 2014 Google’s foreign exchange risk management program resulted in a benefit of $148 million in revenue. The effect of currency headwinds could be even more adverse this quarter, leading to a higher benefit from hedging.

Looking past currency headwinds this should be another decent quarter for Google, but the company isn’t growing nearly as fast as it once was. Last quarter paid clicks were up 14% yoy and 11% sequentially compared to the third quarter of 2014. However, the cost per click also fell 3% yoy and sequentially.

Google still has some of the best targeting services around to offer advertisers, but rivals like Facebook are starting to make a dent. Facebook is offering particularly stiff competition with its mobile ads business, one of its key levers of growth.

The big picture is that revenue growth expectations are at a two year high this quarter and Google is expected to pull in immense profits like it usually does. The difference is that earnings growth is expected to be muted. It’s inevitable that the market share leader in online ads would eventually lose some of its dominance.

Google will post huge earnings Thursday, but keep an eye on the company’s cost per click as that’s the best indication of the search giant’s pricing power and customer demand.