Will Las Vegas Sands Loose Some Of Its Volatility And Get Into A Steady Growth?

Las Vegas Sands Corp. (NYSE:LVS) is listed on NASDAQ since its IPO in 2004. LVS develops and maintains casinos, accommodations, entertainment and retail, convention and exhibition facilities, restaurants and other amenities.

Since its high in October 2007 at $138 it quickly lost most of its value again. The reason for it can lie in some bubble type of volume trading. I believe the company realised that the steady and sustainable long-term growth is better than a quick steep growth. One of the first measures it took was installing a dividend that will make it more attractive for long-term investors to buy their shares. This worked very well and the stock experienced a nice upward trend since mid 2012.

According to Brian McGill, Analyst of Buckingham Research Group, the stock should be rated at the moment as a Hold, and I agree with him. The risk premium we would get for the not proven Macao Model is compensated with the soon to be given dividend. As a reminder, “Sands Macao” is a casino resort located in Macau Peninsula and it’s owned and operated by LVS. It has a 229’000 square feet casino and has 289 rooms in its hotel. According to the LVS Chairman Sheldon Adelson, Macao will soon be more than double the revenue than in Las Vegas itself.

Experts expect that if the Macao Revenue Model will work, it will have a significant positive impact on the share. July reports of the revenue of the Macao Casino are lower than expected, which showed that the revenues declined for the second month in a row but not to get confused about the overall revenue, which increased again.

Currently, the stock is valued at 14.7x EBITDA of 2014 and 12.2x EBITDA. It’s being believed that the upside in this multiple is very limited, furthermore analysts are worried about an unexpected drop in this very important multiple in the gaming industry. This is also in combination with 15% increase in forecast-gross-gaming-revenue in the market in 2014. This would result in a $52b gross revenue and make it clear that this stock on the long-term can do very well. However, the risks presented in the next paragraph show why I believe you shouldn’t buy the stock at this point.

The Macao exposer is something that has to be observed and re-evaluated every quarter to see if the penetration in the market is continuing the way it was planned. Another thing that has to be observed over the next one or two quarters is the steadily YoY slow-down of revenue, while it’s now closer to 2%-6% (back in May 2014 it used to be closer to 9%). Last but not least, there is the Japan penetration plan; the biggest issue over there is that as of now it’s illegal to gamble in Japan, a core part of the LVS business. As scheduled, the new hotel and the change of gambling legislation should be around together in late 2015, this would result – according to analyst Brian McGill – in a $10 stock appreciation.

Wrapping up here with a few numbers for thought: According to McGill, the price target for LVS is now at $73, which represents a slightly upside. The growth came in higher than the industry average of 6%. It seems that the revenue growth significantly helped the company to increase its EPS. The EPS increased significantly, it rose from $1.85 to $2.79, which is a 29.7% increase and the market expects $3.76 for the upcoming year. The revenue increased exactly 11.8% compared to the same quarter last year. Earnings grew by 29.68% and that was definitely one of the driving factors for the surging of the stock by 33.03%. This rise shows the outperformance of the S&P 500 Index over the same period of time. Overall, the growth of the net income has significantly exceeded the growth of the S&P 500 and the Hotels, Restaurant & Leisure industry. Las Vegas Sands’ net income rose from $529.75m to $671.43m within one year.

Conclusive I can say that LVS is currently a Hold, but I believe that if the company will be able to present another great upcoming quarter, it may reveal a buying opportunity 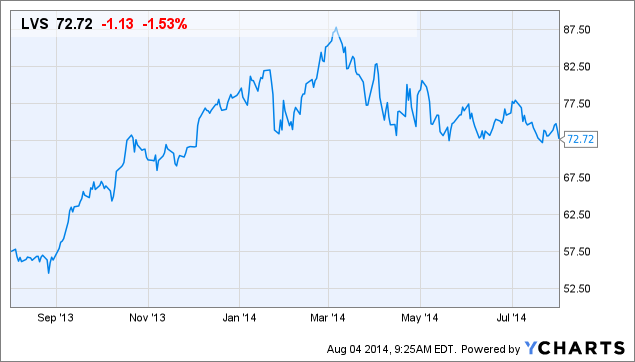