In a research report released today, Canaccord Genuity analyst Michael Graham reduced the price target to $52 (from $56), while reiterating a Buy rating on the stock. With Twitter shares last trading at $38.36, Graham’s price target implies potential upside of about 36%.

Graham wrote, “While there were a few disappointments, we are encouraged by 74% revenue growth, driven by both users and monetization. While we think most of the advertiser-related issues are temporary, the most negative aspect of the quarter in our view was the “low visibility” regarding Q2 (& beyond?) MAU growth. This could temper enthusiasm for the stock until corrected, or investors get comfortable with long-term growth driven solely by monetization improvements.”

However, “On balance we believe the company is early in executing on user conversion/retention, Q2 revenue guidance is conservative relative to historic seasonality, and H2:15 holds good potential for improvement, helped in part by the soon-to-be-launched Google deal. We believe this is likely to prove a good entry point for Twitter stock.”

Cantor analyst Youssef Squali also came out today with a few insights on TWTR’s earnings. While maintaining a Buy rating on the stock, the analyst reduced the price target to $50 (from $62).

Squali reasoned, “We believe the stock already reflects the miss, the lack of visibility into MAU growth, and the pace of the turnaround in DR ad sales. Our LT thesis remains unchanged, given 1) Twitter’s differentiated offering as the largest real-time broadcasting platform with over 300M MAUs, 2) growing level of monetization, and 3) material financial leverage over time. We are lowering our PT to $50 from $62 to reflect the revised outlook/reduced NT visibility, while maintaining the BUY rating despite this hiccup in execution.”

Next up is Axiom analyst Victor Anthony who took the other route, downgrading Twitter’s shares to Hold from Buy, while reducing the price target to $63 (from $45), which represents a potential upside of about 16% from where the stock is currently trading.

Anthony stated, “We continue to believe that there is enormous longer-term potential for Twitter, and overtime, product enhancements and advertiser products should drive user and revenue growth. However, near-term operating risks are exerting pressure on revenue growth, and MAUs have begun to slow once again. Our 2015 revenue estimate was reduced by 7% and our Adjusted EBITDA was reduced by 6%.”

The analyst continued, “We now project that Twitter will grow revenues and Adjusted EBITDA at 45% and 75% three-year CAGRs (2014-2017), respectively, down from 56% and 83%, previously. We have also reduced the target multiple in our valuation. The increased risks at relatively high multiples (13x ’15 sales & 52x ’15 EBITDA) make the bull case for buying the stock challenging. While the pullback will seem enticing to some, we await a more meaningful contraction in the multiples before getting constructive on the shares.”

Analyst Mark Mahaney of RBC Capital also joined the crowd today, reiterating a Sector Perform rating on TWTR with a price target of $47. The analyst admitted that he began to feel incrementally more cautious on the name.

“These Miss & Lower results are surprising. Raises the question of how much visibility into consumer and advertiser demand for its offerings Twitter really has. Management will also again have to address credibility issues. Our broad concerns remain two-fold. First, it’s not clear that the company’s substantial product changes can reaccelerate its User & Usage metrics. And mgmt’s cautious commentary about Q2 MAU growth compounds doubts about Twitter’s user value proposition. Second, channel checks and our extensive survey work don’t provide convincing evidence that a substantial number of advertisers will commit substantial ad $s to Twitter.”, Mahaney wrote.

The analyst added, “The possible “ROI Wall” increases our concern that Twitter’s lack of real-time commercial intent (a la Google) or detailed, authenticated profiles (a la Facebook) will at some point materially limit TWTR’s ad growth potential. All that said, vs. our growth expectations, we see TWTR’s valuation as reasonable. And it remains a unique asset with strategic value. Hence, Sector Perform.” 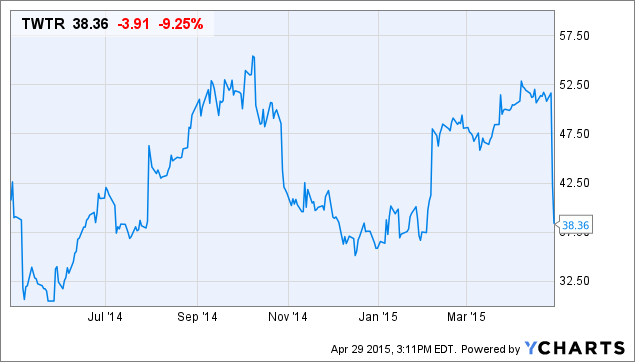