This week, Twitter Inc (NYSE:TWTR) CEO Dick Costolo announced that he was officially stepping down from his position, effective July 1 2015. Jack Dorsey, Twitter Co-Founder and Chairman, will serve as Interim-CEO during the Board’s search for a replacement. Although Costolo is stepping down from CEO, he will remain on the company’s Board. Furthermore, Dorsey will retain his role as CEO of Square.

Mahaney observed, “We view Dick Costolo’s announced departure as a modest surprise but plausibly necessary. While his accomplishments scaling the platform during his five years as CEO should be commended, a new voice is likely needed.” Furthermore, “While there is no timetable for the search, we expect the Board will take its time to identify the right candidate. Our expectation is that the search will primarily focus on external candidates. Mr. Dorsey is CEO of Square and will remain in that role through the transition. Mr. Costolo will keep his seat on the Board.”

Axiom analyst Victor Anthony maintained a Hold on Twitter with a price target of $45.00

Anthony noted, “We think the Board should consider a seasoned and accomplished executive within the technology space and that may require seeking someone outside the firm. Internally, however, the only candidates we see are Adam Bain, president of Global Revenue, and CFO Anthony Noto. Of the two, Adam Bain may be the most logical fit at this time, although we understand that Noto has become a quasioperator within the firm and is a strong candidate.”

“From the outside, Omid Kordestani at Google would make a perfect fit given his experience at Google, which includes positions as head of sales and business development, and now Chief Business Officer, and experience at Netscape and Hewlett-Packard. Stealing him away from Google, which he recently rejoined, may be difficult. Tim Armstrong is another good candidate but that too may be difficult, given the pending acquisition of AOL by Verizon. John Donahoe of eBay is another seasoned executive who will become available after the PayPal spinoff.”, the analyst added.

Hindlian stated, “We have been anticipating just such an announcement following high levels of public scrutiny around Twitter’s volatile and frequently disappointing financial results, and following last week’s shareholder meeting. We believe that a replacement CEO may be able to better define Twitter as an event-driven platform, attract larger branded advertisers, and respond more rapidly to changes in the marketplace. Furthermore, Twitter reaffirmed its Q2’15 outlook, which we feel should aid in calming market fears that the environment in Q2 has worsened since the last earnings report, causing Mr. Costolo to step-down intra-quarter.”

Peck commented: “We continue to be big believers in the opportunity in front of Twitter as it is a unique platform with a tremendous TAM. The company’s long-term success will be predicated on: 1) accelerating product innovation; 2) tapping into its massive logged-out reach; 3) reinvigorating the ~700m registered users that have churned; 4) increasing engagement of its users; and 5) optimizing advertiser offerings and targetability. However, in the short-term, the company is still facing user growth and engagement challenges that will need to be corrected to put the company on the path for long-term success.”

Blackledge stated, “Overall, we are not too surprised by the change in leadership, given user growth and engagement challenges. We view Mr. Costolo as building a strong management team and driving needed product changes, like simplifying the sign-on process and other features (“while you were away”). There is more work to be done on the product offering to drive engagement and user growth, as well as work on building or partnering on the advertising side to effectively compete vs existing and emerging Social/Digital platforms and continue fast-paced topline growth. The stock was initially up 10% after hours off the news and retraced initial gains likely given affirmation of 2Q15 guidance and soft MAU trends.”

Fitzgerald wrote, “In a move likely driven by shareholder consensus, CEO Dick Costolo is stepping down effective July 1st. Shareholders have become frustrated amid decelerating growth in MAUs and recent monetization issues. In the interim, Co-Founder and Chairman of the Board (and current CEO of Square) Jack Dorsey will serve as CEO as the co. searches for Costolo’s replacement. We believe user growth and product improvements, not monetization, should be the new CEO’s ST focus.”

Bhatia observed, “Costolo has been under enormous pressure for some time since results, particularly user growth and user engagement, haven’t met expectations. Though the company reaffirmed 2Q financial guidance, on the key question of user growth in 2Q, management continued to be ambiguous. We expect user growth to remain weak in the near term and think addressing this issue will be job #1 for the company’s future CEO.”

Out of the 40 analysts polled by TipRanks, 25 rate Twitter Inc stock a Hold, while 15 rate the stock a Buy. With a return potential of 30.2%, the stock’s consensus target price stands at $46.65. 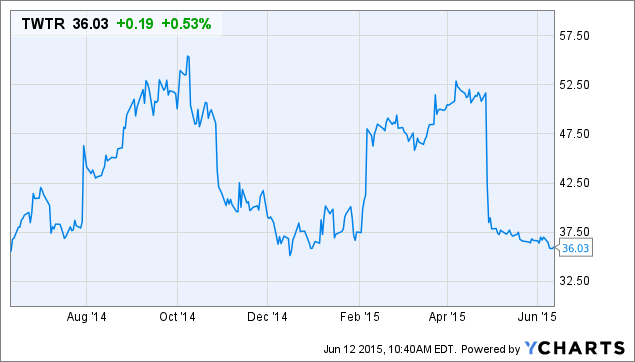