The most anticipated report of the entire earnings season will be released after tomorrow’s closing bell. The number of estimates for Apple Inc. (NASDAQ:AAPL) have already blown away last quarter’s record of 607, currently at 924 for the fiscal fourth quarter vs. the sell side which only has around 40 estimates. Recall that last quarter Apple reported EPS of $1.85, just one cent short of the Estimize consensus yet a nickel above the Street’s consensus. 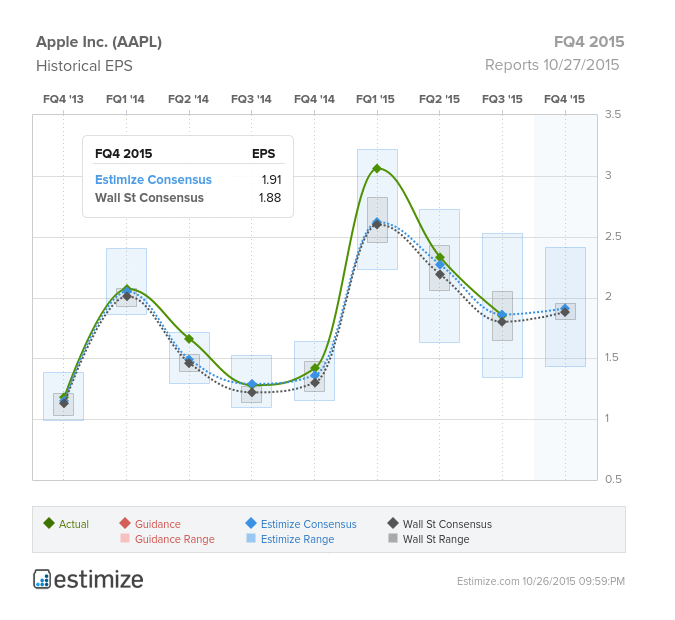 This quarter the crowd is calling for EPS of $1.91 vs. Wall Street’s $1.88, signaling YoY growth of 34%. Revenues are anticipated to come in at $51.359B as compared to Wall Street’s estimate for $50.798B, a 22% growth rate. In addition to earnings and revenues, here are the other areas to watch tomorrow: 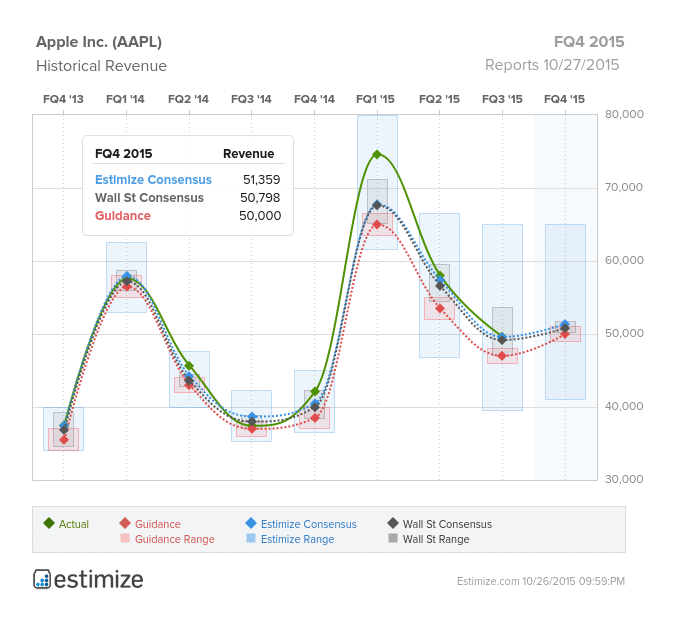 iPhone 6s and 6s Plus sales

Investors will be waiting with great anticipation to hear how sales of the iPhone 6s and 6s Plus are faring. Three days after the official launch in late September, Apple sold more than 13 million units in one weekend, a company record. This is up from the 10 million units that were sold during the first weekend of the iPhone 6 and iPhone 6 Plus launch. This quarter’s report will only include the Friday and Saturday sales of that record breaking weekend, as the fiscal quarter officially ended on September 25.

Much of the company’s success this year can be attributed to China, but can massive growth in that region continue? Earlier this year Apple received approval from Chinese regulators to sell iPhones. During its fiscal Q2 2015 report back in April, Apple reported that iPhone sales in China outpaced the U.S. for the first time ever. In the latest quarterly report released in July, YoY growth in Greater China was up 112%, with nearly 30% of total revenues coming from the region. The latest iPhone models were made available in China on launch day, something that wasn’t true of the iPhone 6/iPhone 6 Plus release.

Despite success in China, Apple needs to continue diversifying its revenue streams by geography. The growth in the Chinese middle and upper classes has bolstered purchases of iPhones, now seen as a status symbol. While the company is working through its plans to expand into 40 additional countries this month, including Italy, Mexico and Spain, it seems the most untapped potential lies in India. However, the multitude of less expensive smartphone options creates a more challenging environment for the iPhone as it is likely out of the price range most are willing to spend in that country.

Update on other products: Apple Watch, Pay, Music, and TV

Investors will also be looking for updates on several of Apple’s other products this quarter that have recently been launched or are in the process of being launched. These products are likely going to help Apple reduce its reliance on its iPhone segment which currently dictates around 70% of revenues.

The much anticipated Apple Watch was released in April this year and is expected to bolster revenue growth in the years to come as the smart wearable device market continues to grow. The company has not given any indication on how the Watch has done in its last two reports, grouping it into its “Other products” segment that includes devices such as the iPod, Beats and others, making individual product sales difficult to track. However, that segment increased 56% in the latest report after putting up dismal numbers in the prior two quarters, attributed in part to Apple Watch sales.

Apple has also continued its aggressive strategy to offer its Apple Pay product across various geographies. Apple recently launched Apple Pay in the United Kingdom offering its services through a range of banks and payment systems including American Express and the Royal Bank of Scotland. Apple also plans on penetrating other markets such as Canada and China in the near term.

Apple recently entered the highly crowded streaming music space with it’s introduction of Apple Music. Although it just launched in June, it seems the service is already stealing market share from competitors such as Pandora, which blamed a revenue miss and loss of subscribers in the third quarter to the rise of Apple Music on their earnings call last week.

Finally, the latest version of Apple TV just became available to order, with first shipments arriving on October 30. The fourth-generation of the product will first be launched in the US, UK, Canada and Australia, with 80 more launch countries to follow. This comes at a time when rumors are flying that the tech giant is in talks with networks to offer a subscription TV service of about 25 channels. Investors will be interested to hear how this product is progressing and more details surrounding the competitive strategy.