With Q3 earnings season all but over, investors can rejoice in the gains that were reported during the quarter. Earnings and revenue came in higher than a year earlier with future estimates expected to build on this success. For the fourth quarter, FactSet estimates earnings growth of S&P 500 companies to touch 3.2% with revenue growth hovering around 5%. This would mark the first time the index posted consecutive quarters of growth in about 2 years.

So far a handful of companies look like they’ll shine next quarter, but none more than Etsy Inc (NASDAQ:ETSY), Tesla Motors Inc (NASDAQ:TSLA), Alcoa Corporation (NYSE:AA), NVIDIA Corporation (NASDAQ:NVDA), and Netflix, Inc. (NASDAQ:NFLX. According to the Estimize data, this group of companies are exhibiting the tell-tale signs of an earnings beat: heavy upward revisions activity, strong history of topping analysts estimates, and consist year-over-year growth. 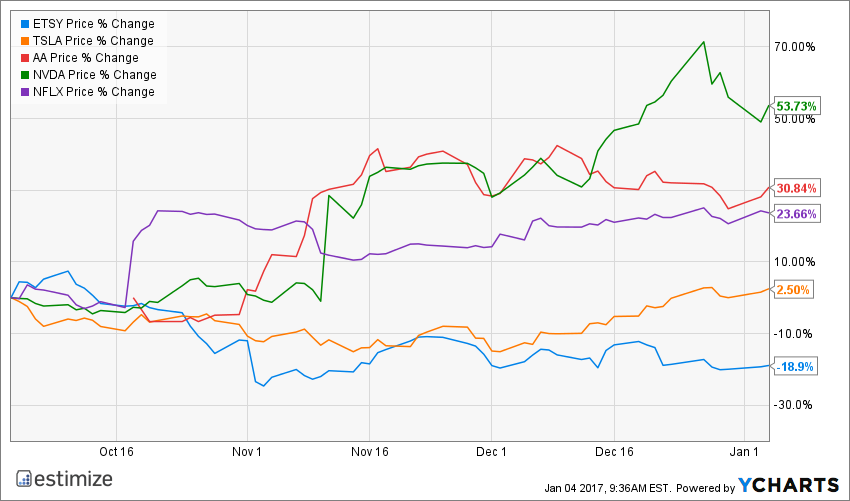 While many online retailers have struggled to compete with Amazon, that hasn’t been the case for Etsy. Etsy’s niche marketplace of handmade arts and crafts has found its footing in the rapidly evolving retail space. Etsy has delivered better than expected results for 3 of the past 4 quarters and year-to-date the stock is up 52%.

During the third quarter, management increased guidance for many key financial metrics such as gross merchandise sales, revenue, gross margin and adjusted EBITDA. This is a clear signal that its ongoing initiatives and acquisitions continue to improve financial performance. Furthermore, Etsy agreed to acquire AI startup, Blackbird Technologies, in September, a move that will bolster its search capabilities.

Early estimate activity suggest Etsy will be one of the best performers for the upcoming fourth quarter. Analysts at Estimize are calling for earnings per share of 6 cents, 119% greater than Wall Street estimates and 198% higher than a year earlier. Revenue for the period is forecasted to jump 22% to $107.59 million, marking a slight slowdown from previous results.

Tesla surprised pretty much everyone last quarter after not only delivering a profit for the first time ever but one as large as 71 cents per share. Revenue made equally impressive strides, growing by 85% on a record number of car deliveries and production. With the Model 3 set to be released in Spring 2017, Tesla should see a new and quite possibly the biggest layer of support to the top line.

Even though fourth quarter deliveries fell short of its own forecasts, the electric carmaker appears headed in the right direction. The Estimize community still believes the electric car maker can turn a profit of 5 cents per share for the fourth quarter which is surprisingly lower than Wall Street’s estimate at the moment. Revenue estimates for the period have dropped 5% in the past 3 months to $2.25 billion, reflecting a 39% increase from a year earlier.

Analysts are confident that Alcoa can kick off, as it typically does, fourth quarter earnings season on a high note. The industrial sector saw the biggest upside following the shocking results of this year’s election. Trump has clearly stated on multiple occasions that he would bring jobs back to the United States and devote a large amount of resources to manufacturing/industrials. This could provide a meaningful boost for Alcoa that had otherwise struggled throughout this low growth environment.

Third quarter results missed analysts estimates by $240 million on the top line and 4 cents on the bottom. Management put the blame on the aerospace side of the business which was down 6 percent year over year.

Moving forward, Alcoa will no longer report its value added under its namesake brand but under the newly independent publicly traded company, Aconic. The separation of its value added and upstream segment will prevent a slumping aluminum business from holding back growth in faster growing plane and car parts.

Analysts at Estimize are optimistic that Alcoa can right the ship in its first report after the split. Earnings estimates jumped 138% in the past 3 months to 26 cents per share with sales targets hovering around $5.13 billion. Shares typically don’t react well during earnings season but any sign of reversing its losing streak should send the stock soaring.

Nvidia posted one of the largest percentage beats this earnings season amongst all the companies in the S&P 500, so it seems fitting to find them on a list of potential Q4 winners. Earnings for the third quarter topped analysts estimates by over 50% while sales trumped those very same expectations by 18%. Management credited strong growth on the continued success of its core GPU business and significant progress made in VR, self driving cars and data center computers.

NVidia has left very little reason to believe that any of these businesses will take a step back in future quarters. The biggest concern might be analysts’ and investors’ unreasonably high expectations given the company’s recent gains. Nevertheless, analysts continue to ramp up forward estimates to unprecedented levels. For the fourth quarter, the Estimize consensus data edged significantly higher to 92 cents per share on $2.12 billion in revenue.

If not for NVidia, analysts would be touting Netflix as one of the best Q3 earnings plays. The video streaming service pulled out quite the surprise in the third quarter, beating analysts expectations on both the top  and bottom line. Most of the gains came from a blow out subscription number which gained 370,000 net members in the U.S. and 3.2 million internationally, handily beating the 2.3 million management forecasted.

Netflix steady stream of original content and new initiatives like an offline option will continue to provide support to the top line. But the cost of rolling out new content will put pressure on the bottom line. Revisions activity following the report unsurprisingly edged higher for the fourth quarter. The Estimize community is now looking for earnings of 14 cents per share on $2.46 billion in revenue, reflecting an 83% increase on the bottom line and 34% on the top.