Apple Inc. (NASDAQ:AAPL) holds the title as the most valuable firm in the world with a market cap of over $625 billion and profits surpassing $50 billion in any given year. Yet, Apple is a company at a crossroads. The outlook of its moneymaker, the iPhone, looks gloomy after 15 months of weakened sales and no breakthrough product releases. Meanwhile, sales from other products like Macbooks and iPads remain stagnant in this changing consumer environment that favors value channels. Over this time, Apple made several small acquisitions in newer technologies to offset the losses from its legacy business, but investors are now looking for Apple to make a splash with an acquisition of a larger well known company. Its  $200 billion in cash hoarded overseas would more than cover the cost of names like Advanced Micro Devices, Inc. (NASDAQ:AMD) and Netflix, Inc. (NASDAQ:NFLX). 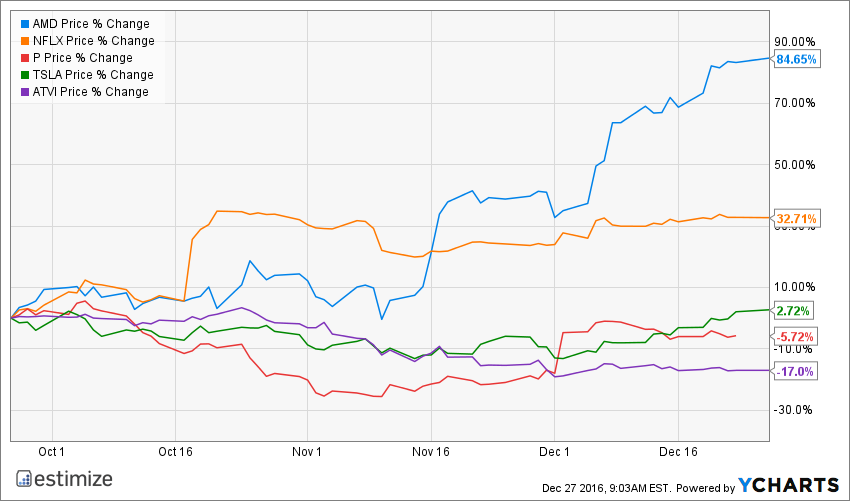 AMD made one of the biggest jumps this year in terms of fundamentals and stock performance. Shares nearly doubled over the past 12 months on a string of better than expected quarterly reports and record revenue growth. Its presence in GPU and CPU continued to challenge Nvidia and Intel’s dominance but its the improvement in newer technologies like virtual reality and Internet of Things that pushed the chipmaker higher. If a sale happened, AMD would likely demand a huge premium from past years, but considering it’s encouraging outlook, today’s price will be a bargain 5 years down the road. Apple could use AMD to provide chips for its Macbook but also aid in developing new virtual reality and driverless car projects

Apple found early success in the music streaming business with the iPod and iTunes but its efforts to crack video streaming continue to fall flat. At the moment, Netflix and Amazon.com, Inc. (NASDAQ:AMZN) maintain a strong leader over the video space as many other services make half-hearted attempts at breaking through. Netflix in particular boasts a robust catalogue of original content and the fastest growing user base in the space, mainly due to its international efforts. Its abundantly clear where Netflix would be used within the Apple ecosystem. Every Apple device would come preloaded with Netflix making it the defacto video streaming service even above Amazon Instant Video.

While Apple was the first  big mover in the music streaming space, its competitive advantage has been cut down in recent years. The recently launched Apple Music platforms pales in comparison to Pandora Media Inc (NYSE:P) and Spotify in terms of active users and listening hours. An acquisition of either company would be a revival of the iTunes store but also add a layer of much needed revenue. Pandora makes more sense as a takeover target considering its weakened fundamentals and waning presence in the space. Apple could scoop up the streaming service on the cheap and turn it around to profitability.

Driverless cars are arguably the most closely watched technology today with many big names vying to release the first mainstream vehicle. But this hasn’t come without problems. Uber recently took its first autonomous vehicle off the streets of San Francisco while Google tabled its plans to develop anything of the sort for the time being, putting Tesla Motors Inc (NASDAQ:TSLA) in front of the driverless car race. Tesla maintains it will release enhanced self driving features across its fleet of models in the coming months. Apple was once believed to be developing an autonomous vehicle but those plans fell flat. An opportunity to re-enter this rapidly growing space would be a huge win for Apple. With a market cap just north of $30 billion Tesla is still in the realm of affordability for Apple but a takeover would need to occur sooner rather than later.

Video games are the fastest growing form of entertainment, grossing more revenue than both the movie and music industries, therefore it’s not surprising that many video game publishers also make great investments. However, there is one name that stands out from the rest. Activision Blizzard, Inc. (NASDAQ:ATVI) continues to reach new heights each quarter thanks to the success of its original PC and console games but also mobile content. The acquisition of King Digital, maker of Candy Crush, last year catapulted Activision to the front of the mobile gaming space. Apple could immediately leverage Activision’s growing fan base and strengthening fundamentals for its own success. That said, it seems as though Apple would embrace new technologies like those referred to above before dipping into video games.