Equity analysts have recently weighed in with favorable reports on Repros Therapeutics Inc (NASDAQ:RPRX), as the company’s Androxal AdCom meeting and PDUFA preparations are in high gear. As a reminder, on April 15, the company announced that the FDA has assigned a PDUFA date of November 30 for Androxal for the treatment of Secondary Hypogonadism. The FDA will also host an advisory committee meeting to review Androxal.

Ladenburg’s healthcare analyst Matthew Kaplan has high hopes for RPRX ahead of the upcoming events, stating, “The NDA includes a significant collection of data on safety and efficacy from over 20 studies, including four Phase 3 efficacy studies. We are encouraged by November 30 PDUFA date and believe it clears a major hurdle in the regulatory history of enclomiphene citrate. Meanwhile, Repros has also engaged a European regulatory consultant to convert its Androxal NDA to a suitable dossier for EU filing, and estimates an EU filing by 1Q16.” The analyst rates Repros shares a Buy, with a price target of $35, which implies an upside of 382% from current levels.

Brean Capital analyst Jonathan Aschoff took the same route, reiterating a Buy rating on the stock, with a price target of $41, which represents a huge upside of 465% from Tuesday’s closing price of $7.26.

Aschoff wrote, “We do not believe that the advisory committee has any valid reason to reject Androxal, given the clear demonstration of efficacy in four Phase 3 efficacy trials and a differentiated safety profile versus exogenous testosterone (TRT) in over 20 trials. Androxal has not only proven itself to be at least as effective as TRT, but affords a patient no negative impact to fertility as well as no negative impact to endogenous testosterone production. Upon cessation of therapy with Androxal, a patient with secondary hypogonadism still produces endogenous testosterone for months, versus an immediate end to endogenous testosterone production after TRT. Androxal has endured an indisputably tumultuous clinical experience, but we believe Repros has finally generated sufficient data to get Androxal across the goal line.” Furthermore, “Repros ended 1Q15 with about $38 million in cash, which should support Repros’ operations into 2H16.”

According to TipRanks.com, which measures analysts’ and bloggers’ success rate based on how their calls perform, analyst Jonathan Aschoff has a total average return of 7.6% and a 55.1% success rate. Aschoff is ranked #426 out of 3610 analysts.

Finally, Laidlaw analyst Yale Jen reiterated a Buy rating on RPRX, while issuing a $28 price target, which implies an upside of nearly 285% from current levels.

Jen observed, “Given Androxal is a new chemical entity (NCE) and with very different mechanism of action vs. all other current therapies in treating secondary hypogonadism; an AdCom meeting is very likely to be held for the FDA to present their own, and seek outside expert, opinions. Our discussion with management indicated that the company is in high gear for preparation of the anticipated AdCom meeting. We estimate the meeting could be held in the September/October timeframe.” “With the robust results of multiple Phase III studies, we remain bullish on a positive outlook from the AdCom meeting and likely approval by the FDA for Androxal.”, the analyst added. 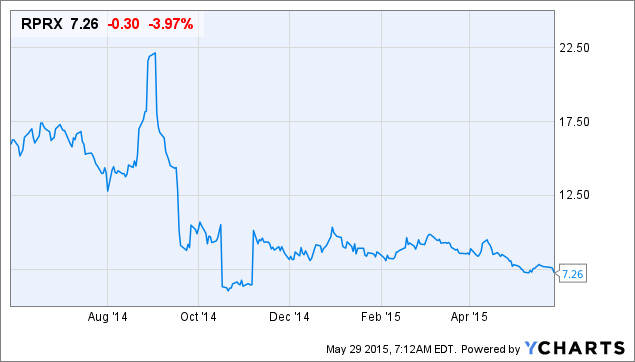