In a research report published Thursday, Canaccord analyst Michael Walkley reduced the price target on Qualcomm to $80 (from $87), while reiterating a Buy rating on the stock. The new price target represents a potential upside of 19% from where the stock is currently trading.

Walkley noted, “Q3/F15 and overall F2015 guidance was below our expectations due to QCT negatively impacted by stronger share in the high-end smartphone market for Apple that uses modem only solutions versus higher-ASP integrated Snapdragon solutions, lower QCT chipset content share in the high-end Samsung Galaxy S6, and faster-than-anticipated portfolio transition or decline in units for Samsung’s legacy Galaxy S5 smartphones with strong QCT chipset content.”

Brean Capital analyst Mike Burton also came out today with a research report on QCOM, reiterating a Buy rating and reducing the price target to $80 (from $87).

Burton stated, “Qualcomm reported a beat in the March Q but guided June and the 2H down well below consensus as “product cycle issues” aka “share loss at Samsung” continue to impact QCT. We are adjusting our estimates downward to account for the lowered guidance and reducing our target price commensurately.”

Furthermore, “We do expect QCOM to begin to regain its lost market share in a meaningful way starting slowly in the 2H15 and accelerating in 2016 as modem transitions (CA Uplink) drive demand for QCOM’s basebands and its improved AP begins production on Samsung’s 14nm process. Our new target price is based off 14.6x our new CY16 estimate of $5.50.”

Additionally, analyst Christopher Rolland of FBR Capital put together a report in light of QCOM’s earnings, lowering the price to $70 (from $72), while maintaining a Market Perform rating on the stock.

Rolland commented: “While the company announced it was looking into a program to reduce future operating expenses, we were disappointed by the lack of meaningful opex cuts in F3Q15, despite the reduced revenue guidance. The lack of meaningful opex cuts is expected to drive QCT EBIT margins to 7%–10%, the lowest in modern record. While the report was mostly disappointing, QCOM discussed a modem change in 2H15 in China that should help it retain local share.”

The analyst continued, “Stepping back, we think QCOM remains the gold standard in today’s cellular technology. However, we acknowledge a growing trend among handset OEMs to “roll their own” apps processors and baseband modems to reduce eventually their devices’ costs. Additionally, QCOM’s IP position in 4G LTE is significantly weaker than 3G, as we expect increasing QTL pressure over time.” 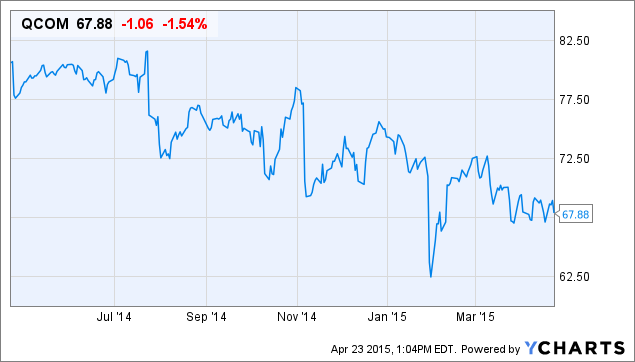