Endo Health (NASDAQ:ENDP) and Auxilium Pharmaceuticals (NASDAQ:AUXL) finally came to terms in ongoing buyout negotiations, with ENDP handing over $2.6 billion ($33.25 per share) in cash or stock for the smaller men’s health company. The companies have continued negotiations since Auxilium rebuffed an earlier $2.2 billion offer from Endo, in mid-September.

This leaves QLT Inc. (NASDAQ:QLTI) out in the cold. QLT and Auxilium had been in the midst of their own merger, and AUXL is now obligated to pay QLTI a $28.4 million breakup fee: that’s $0.55 per share cash on a $4.00 stock.

With the breakup fee, QLT Inc should have around $165 million in cash ($3.22/share), a phase 2 orphan opthalmology asset, and the company is valued at a little over $200 million.

QLTI put itself on the auction block in late 2013, engaging Credit Suisse to pursue strategic alternatives shortly after returning a glut of cash to shareholders. On June 26, 2014, Auxilium and QLT entered into a merger agreement through which a wholly-owned subsidiary of QLT would be merged with and into Auxilium. QLT would remain incorporated in Canada (a tax inversion for AUXL) and renamed “New Auxilium.” For QLT shareholders, the transaction represented a 25% premium. QLTI traded to $6.50 on the news. At the time, PropThink had been suggesting involvement in QLTI for just this reason: an impending acquisition or divestiture. When the stock traded up, we sold the position given its reliance on AUXL’s stock price.

Our view is that QLTI’s BoD will find a way to wind down the business in a favorable manner. Jason Aryeh, QLT’s Chairman, said on Thursday that the company would immediately re-engage its assessment of potential strategic options. Whether selling off QLT091001 and distributing cash to shareholders or simply merging/selling the company, we’re looking for an exit in the not-distant future.

We’ve written extensively in the past about QLT’s board and track record, which you can catch up on here.

QLTI ended the second quarter with $137.9 million in cash and equivalents. The company expected to receive $5.5 million in the third quarter related to the Eligard contingent consideration, and an additional $28.4 million from Auxilium. We estimate the company’s third quarter burn at $6 to 8 million, putting the company’s cash balance around $164.8 million: $3.22 per share.

Using the previous AUXL merger as a proxy, QLTI should be able to get another deal or sale done in the $6-range. We like the risk/reward putting money to work on the long side in QLTI around $4.00, especially as small-cap stocks diverge rapidly from the rest of the market.

Of note, three size-able funds still own >30% of QLTI: Axial Capital (8.865M shares), Kingstown Capital (3.25M shares), and Visium Capital (4.319M). All three of these funds entered into a Voting Agreement with Auxilium at the time of the merger, under which they committed to vote in favor of the planned transaction. Clearly, these shareholders are in favor of an opportune exit and have the clout to make something happen if delays occur.

Disclosure: One or more of PropThink’s contributors are long QLTI or ENDP. 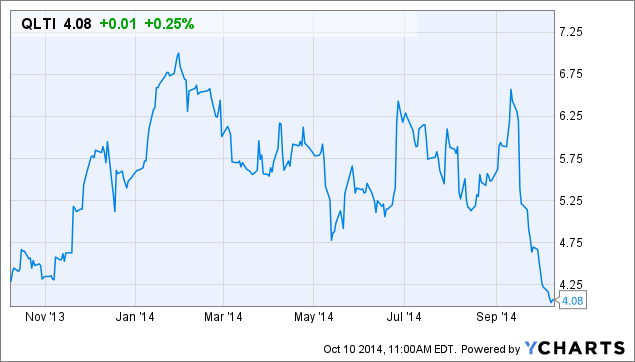