Phillips 66 (PSX) From A Bullish Perspective

Lower gasoline and distillate margins have impacted on the financial results of U.S. refiners in the first quarter of 2016 and caused their shares to drop significantly.

In fact, all the five U.S. leading refining companies’ shares have shown a decline in the last four weeks between -6.1% for Valero Energy (NYSE:VLO) and -20.2% for HollyFrontier (NYSE:HFC).

Moreover, all the five companies have recorded a negative return (including dividends) in the last 52 weeks.

Phillips 66 has shown the best performance among the leading refining companies with a negative return of -0.5% while HFC’s negative return has been very high at -34%, as shown in the table below.

Phillips 66’s diversified business model includes refining, midstream, chemicals, and marketing and specialty operations. As such, the company’s cash flow is less volatile than that of pure-play refiners.

On April 29, Phillips 66 reported its first quarter 2016 financial results which missed earnings-per-share expectations by $0.20 (23%). Quarterly revenues of $17.8 billion came above the consensus estimate of $16.9 billion. Phillips missed earnings-per-share estimates in the recent quarter after beating expectations in its previous six quarters, as shown in the table below.

The company reported first-quarter earnings of $385 million, compared with $650 million in the fourth quarter of 2015. Adjusted earnings were $360 million, a decrease of $350 million from the last quarter.

In the report, Greg Garland, Chairman and CEO, said:

“Weaker margins impacted our financial results in the first quarter. Our businesses ran well, and we remain focused on operating excellence with industry-leading safety performance. During the quarter, we successfully completed planned turnarounds and accelerated some maintenance activities in the low margin environment. We are committed to maintaining our strong balance sheet and a disciplined approach to capital allocation. During the quarter we reinvested $750 million in the business and distributed $687 million to shareholders.” 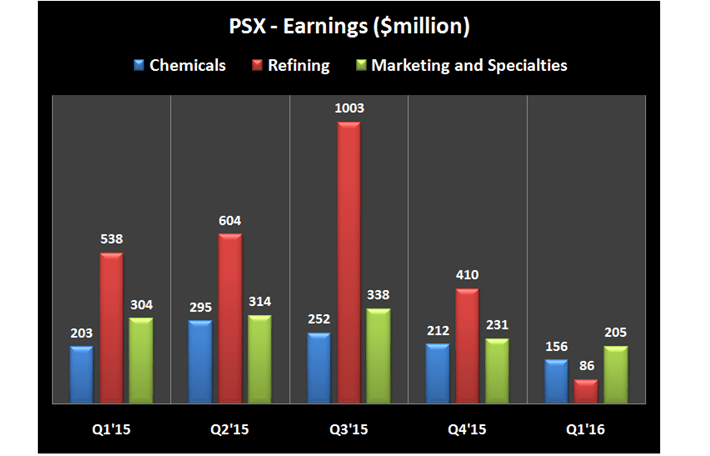 In the third quarter of 2015, the refining segment earnings were as high as $1,003 million, largely driven by improved realized gasoline and secondary product margins, as well as higher volumes.

According to Howard Weil report from May 11, U.S. Gulf Coast’s average crack spread in the current quarter has been $9.73 per barrel, compared to $9.28 in the fourth quarter of 2015.

While Phillips 66 is geographically diverse and totaling 2.2 million barrels per day of throughput capacity, the U.S. Gulf Coast represents the largest portion at 738,000 barrels per day. Approximately 81% of total throughput capacity is located in the U.S., with international locations that include Ireland, the United Kingdom, Germany, and Malaysia. As such, we can expect a slightly better refining margin in the current quarter compared to the prior quarter. 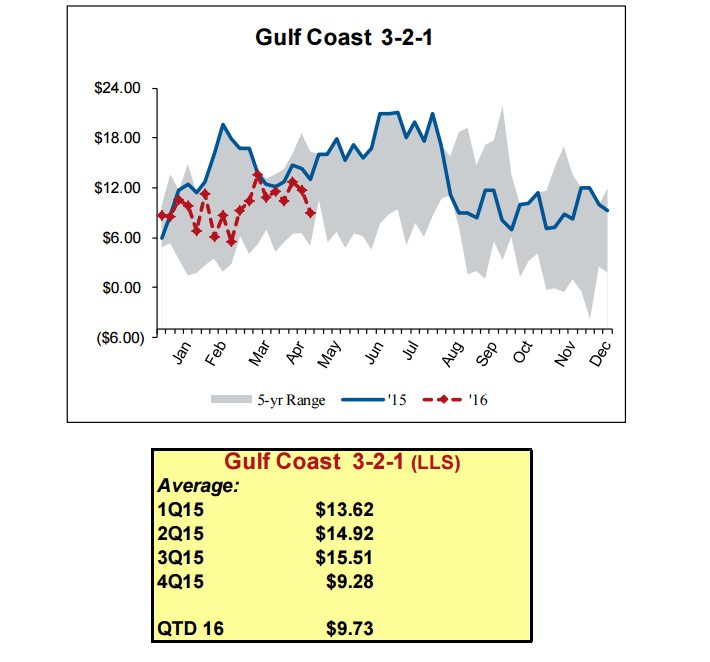 According to Bloomberg, Buffett’s through Berkshire Hathaway (BRK-A) has been steadily adding to his holdings since August 2015, when he first reported a $4.5 billion stake in the company.

Buffett’s company now owns a 14 percent stake in the company, the sixth-largest holding in its portfolio. This year, he has spent about $1.08 billion on 14.1 million shares at an average price of $77.13, according to regulatory filings.

His total stake in the company is worth $5.94 billion based on May 16 closing price of $78.68. Many investors follow Mr. Buffett due to his impressive long time record of success in picking value stocks.

In my view, Mr. Buffett’s bet on Phillips 66 makes much sense. Buffett has stated several times he looks to buy great businesses when their stock prices decline.

“Whether we’re talking about socks or stocks, I like buying quality merchandise when it is marked down.”
– Warren Buffett

On May 5, PSX’s board has declared a quarterly dividend of 63 cents per share on Phillips 66 common stock, representing a 12.5 percent increase. The dividend is payable on June 1, 2016, to shareholders of record as of the close of business on May 18, 2016.

Since the formation of Phillips 66 in 2012, the board has increased the dividend six times, representing a 33 percent compound annual growth rate. The forward annual dividend yield is pretty high at 3.20% and the payout ratio is only 33%. 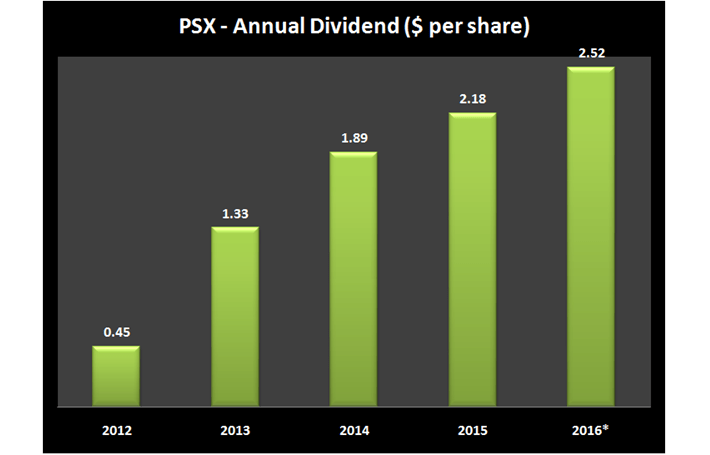 According to TipRanks, the average target price of the top analysts is at $86.67, an upside of 10.2% from its May 16 close price, however, in my opinion, shares could go much higher.

Moreover, PSX’s Return on Capital parameters have been much better than its industry median, its sector median and the S&P 500 median, as shown in the table below:

Phillips 66 delivered first quarter results which missed earnings-per-share expectations due to lower gasoline and distillate margins. That was the first time after six quarters of beating estimates that the company missed expectations.

However, PSX’s businesses ran well, and it remains focused on operating excellence with industry-leading safety performance. According to Howard Weil report from May 11, U.S. Gulf Coast’s average crack spread in the current quarter has been $9.73 per barrel, compared to $9.28 in the fourth quarter of 2015.

As such, we can expect a slightly better refining margin in the current quarter compared to the prior quarter. Phillips 66 has compelling valuation metrics and healthy earnings growth prospects; its P/E ratio is very low at 11.8.

Moreover, the company returns substantial capital to its shareholders by stock buyback and increasing dividend payments. The average target price of the top analysts is at $86.67, an upside of 10.2% from its May 16 close price, however, in my opinion, shares could go much higher.  PSX’s mix of value, growth potential when oil prices rise, and safety gives the stock a high rank using The 8 Rules of Dividend Investing.