Is The Market Setting Up For A Big Fall?

Back on March 27, 2009 I wrote about how Spring was in the air. You could see it almost everywhere you looked. A new BULL market had been born.

That was 67 months ago. That was a pretty good call and I have been fully invested for the most part ever since. I have grown cautious at times, but I have never received a SELL SIGNAL on the S&P 500 since that day.

I have been writing recently about how this current BULL MARKET will eventually come to an end at some point in time, however. No BULL market lasts forever. The Bear eventually wakes up and wreaks havoc on portfolios. Last time the Bear ravaged through portfolios to the tune of 53%.

John Bogle of Vanguard Funds would tell you that it is no big deal. Index investing is the way to go. Riding passively through the thick and thin of the market over the years almost always beats active management. He has a good point. Passive investing is a lot easier than active management. And in the long run, it turns out OK.

But, as a passive investor you have to be willing to accept 50% plus sell-offs every so often. I don’t like to sit passively bay and watch the accounts that I manage get crushed.

Lately, these big selloffs have been about seven years apart. We had a huge sell-off in 2001 and again in 2008. Under this timing scenario, the next one is not due until 2015. Wait a minute! 2015 is just around the corner!

I wish it were that predictable, but it is not. But it is definitely something to consider. Believe it or not, we do have a Fall season here in San Diego, where I am based. It begins right after Labor Day. The tourists go home, the hotels start to empty, and we have the beaches all to ourselves.

The worst part of Fall for me is seeing the pelagic (migratory) fishing come to an end as the warm, clear water currents turn cold and dirty. The tuna, yellowtail, dorado, and marlin move on. They are gone until next year.

There is definitely a feeling of Fall in the market air this year. The fishing has been good for over five years. The S&P 500 has climbed from 666 to a high of 2019. It has more than tripled.

The S&P 500 is now down 5.6% from its September 19th high. That is a percentage drop of 5.6% and stocks are beginning to fall like autumn leaves. A 5.6% drop in the S&P 500 is well within normal volatility in the market, but we need to look at the facts once again this week to see if it is time run for cover.

I have been warning about U.S. Small-Cap stocks for quite some time now. They are now down 13.2% from their mid-September high. This is getting to the outer edge of normal volatility and is considered correction territory. We need to definitely look into this further. This is not good.

Emerging Markets are now down 11.9% from their recent high. Again, this is still within the normal range of volatility, but is very troublesome nonetheless.

Even more disturbing is a 13% drop in the EAFE (European Index). In fact, this is the one that has many investors chewing their nails the most right now. I have been warning about Europe for quite some time.

Let’s take a closer look at the events of the past week. The S&P 500 had its worst weak of the year. It was also its most volatile week. Every day was a gain or loss of 200 points or more. No fun, I know!

The good news is that the FED is not going to be in any hurry to raise interest rates. The bad news is that markets are now testing KEY technical support levels.

Bonds were the big winner this past week as money gushed into them, seeking a safe harbor. The ten year yield is now trading at a 52-week low of2.31%. Maybe it’s time to refinance that mortgage?

Brazil was also a bright spot, as the pro-business candidate came out of nowhere to force a run-off against the incumbent. The market down there loved it. Brazil is now facing an India-like moment soon. So far, every major election in the world has gone to the pro-business candidates. It appears that the socialism experiment is coming to an end, at least in countries where voters have a voice.

The S&P 500 is still in positive territory for the year. Looking at the 3 year chart, the uptrend is still in place, but the market has fallen below its 200-day moving average in red. 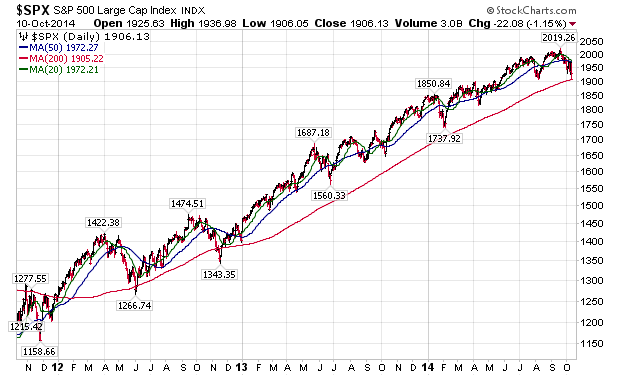 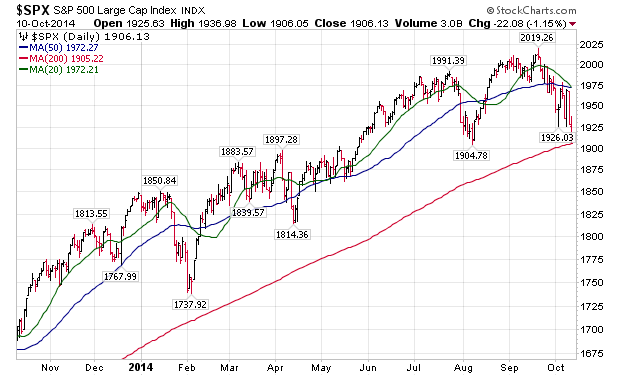 As you can see, 1905 is a fairly important support level. That is right about where the 200 day moving average lies, and it is where the market most recently found support.

The S&P 500 has closed below its 200 day moving average several times during the 68 month old bull market, however. While a break below it would not be good, it is still not enough evidence reason to run for the hills.

The Russell 2000 (U.S. Small-cap) index is now tracing out a very UGLY rollover pattern. The next level of support is clear down around 850. That is scary! Remember, I have said repeatedly over the last several weeks that theSmall-Caps could lead the market into the next bear market. Right now, this appears to be the case. 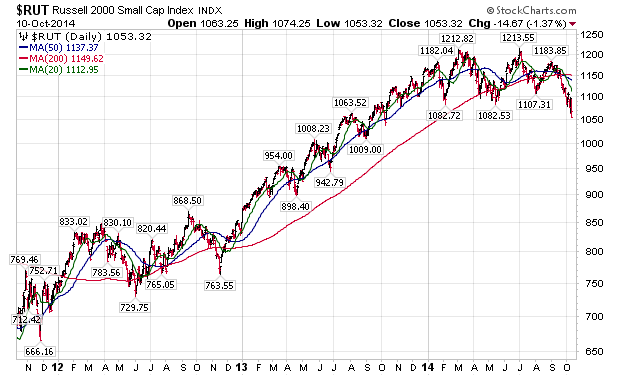 I have been closely monitoring the S&P 500 Small Cap ETF (NYSEARCA:IJT) for several months. 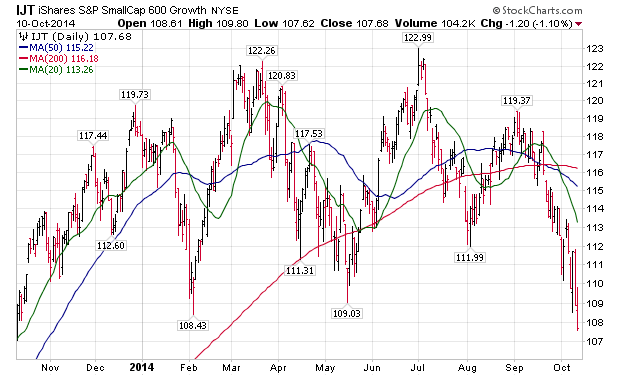 I would not own U.S. small or mid-cap mutual funds or ETFs right now.

Emerging Markets and MSCI Europe have also broken below their 200-day moving averages. As the sell-off overseas continues to accelerate, the question is will it take the U.S. markets with it? I sold all of my Emerging Market holdings (except India) a few weeks ago.

For now the U.S. job market still looks good. Remember that big rally that we had last Friday when the jobs numbers came in better than expected? GDP should come in around 3.0% this quarter, and corporate earnings continue to grow. In addition to this, there is no sign of any inflation whatsoever, and interest rates remain low. This is favorable for the Stock and Bond markets. Once again, we have just entered into an important earnings season.

While the fundamentals of the U.S. economy seem to be good right now, the psyche of investors is not. There is a real battle going on between fundamentals and sentiment right now. We need more evidence before we give a nod one way or the other, but sentiment usually wins. My September 27, 2009 S&P 500 BUY SIGNAL is still on for now, but it is in severe jeopardy.

Some things to look for over the next weeks is the stabilization of the dollar and oil prices. And as earnings start to come out, investors should look to corporate earnings as an indicator that foreign ills are contaminating the U.S. recovery.

According to TipRanks.com, which measures analysts’ and bloggers’ success rate based on how their calls perform, analyst Bill Gunderson has a total average return of 2.0% and a 49.5% success rate. Gunderson is ranked #1271 out of 3897 bloggers.