Apple Inc. (NASDAQ:AAPL)’s stock price history shows great swings which has been a concern for some investors. At the same time, Apple is a juggernaut in the technology sector and is probably the most heavily analyzed stock in the past few years.

It is often seen as a momentum stock which can be used to give good returns by following the trend. However, as the stock inches towards the hallowed mark of $1 Trillion dollars the company is also undergoing a metamorphosis.

Apple should not be considered as a company which only produces innovative products. Instead, it is slowly moving towards creating an ecosystem where its products and services become an indispensable part of everyday life. This will eventually lead to a more mature firm with stable revenue streams, which should provide it with the option of returning more capital to the investors.

Apple’s stock price history has shown a direct impact of this policy over the past few quarters. The company has been able to execute these massive buybacks as it is sitting on $194 billion of cash. After deducting $40 billion of long term debt, this still comes to an eye popping figure of close to $150 billion. In addition, the company generated free cash flow of $47.2 billion, in the first six months of fiscal year 2015. 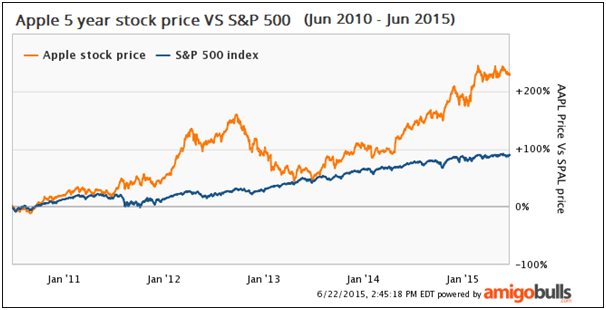 Apple restarted giving dividends from 2012 and has hiked the rate thrice to take it from a quarterly rate of 38 cents per share to 52 cents per share in the latest quarter. One can still see the shadow of Steve Jobs in these major decisions. Jobs was strictly against dividends and the current board has also taken a conservative approach while increasing dividends. This has ensured that the firm has a much lower payout ratio of dividends than other technology stalwarts. 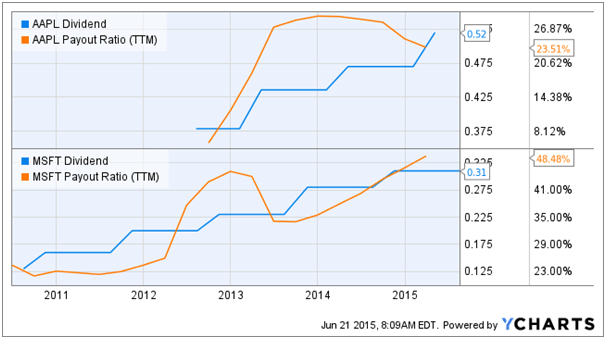 Fig 1: Apple’s payout ratio has stabilized in the 20’s range whereas Microsoft has increased the payout to close to 50%.

Apple’s EPS growth has been above 40% in the past two quarters and the average analyst estimate for this year’s earnings growth is 34%. This means the board can give a 34% hike in dividend without affecting the payout ratio.

However Apple’s board has been much more moderate in its approach and has given a cautious 11% increase in dividends raising it from 47 cents to 52 cents per share. Going forward, if the company performs at the current rate, the board should become more confident while deciding dividends and give good year-on-year dividend growth.

The biggest hurdle in increasing the dividend has been the taxation structure within US. Most of the cash for bigger firms like Apple is stashed in overseas locations and they would take a major hit when this cash is repatriated to US.

According to a Bloomberg report, multinational corporations have kept over $2.1 Trillion overseas. Of the $193.5 billion in cash, Apple has around $171 billion in offshore locations. The company would certainly like to tap this resource and has made vigorous efforts to reach an arrangement on the tax issues.

Investors can be assured that Congress will come to a decision on this issue in the next year or two, either through a mutual agreement with the corporations or a mandate. This will allow firms like Apple to deploy their cash hoard in returning greater value to the shareholders.

Due to the above issue, Apple is using stock buybacks as an alternative way to return value to shareholders. It has increased the buyback program to a massive $140 billion, which will be used through March 2017.

It will use long-term debt to finance this program thus preventing the taxation issue. It has already secured over $40 billion in long-term debt which was used largely for stock buybacks. This program reduces the available cash for dividends but provides added incentive by reducing the outstanding stock of the company.

Activist investors like Carl Icahn, have been nudging the management to return value to stockholders through stock buybacks for the past two years. Apple stock has shown good appreciation in the stock following major buyback announcements.

The stock is trading at a P/E of 15.65 which is quite moderate considering the fact that Apple is still one of the biggest brands in the world. In comparison, S&P index is trading at 21.73 and other tech companies like Microsoft are trading at 19.12.

Apple sells tens of millions of devices every quarter with good growth in major markets like China where it has registered 70% growth. Its large fan base guarantees good reception of its product and also provides a ready market for new products. There is a continuous threat from newer entrants like Xiaomi and Huawei, not to mention the rivalry with Samsung. These threats are not new to Apple and every firm in the tech space is always under a barrage of fire from competitors, changing market dynamics, newer technological movements and more. One of the biggest downsides to Apple is that it is not in a slow changing industry.

The present management has showed great astuteness by pushing the firm in newer areas with more stable revenue streams. Some of the biggest steps include the partnership with IBM where they will make products and deliver services to corporate clients. Its recent acquisition of Metaio, which works in augmented reality space is also commendable as the firm is aggressively pursuing future growth engines. These decisions will ensure that the firm is a couple of steps ahead on the innovation curve.

The current yield for Apple is much lower than other tech firms. However, one needs to factor in the growth possibilities ahead of Apple. As the firm hits a saturation point in terms of growth, this dividend yield will rise up to the level of other tech companies. 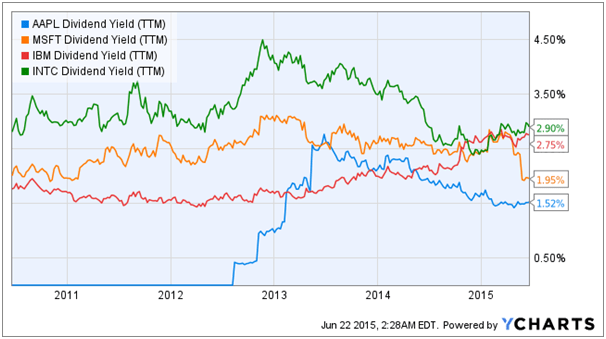 Fig 2: Comparison of dividend yield of Apple, Microsoft, Intel and Cisco in the past 5 years.

Apple has a great pipeline of products and has earnings which are unmatched in corporate history. One can see that the firm has transformed into a shareholder friendly company, transferring billions of dollars to shareholders through stock buybacks and dividends.

Investors should find good capital appreciation and an increasing dividend payout. This can be a great time to for dividend hunters to invest in Apple, as the company moves to more mature revenue streams and continues to return a greater share of its earnings to shareholders. On the downside, Apple exists in a rapidly changing industry which makes its current competitive advantage less durable than more stable businesses.