Apple Inc. (NASDAQ:AAPL) stock has been performing mightily this year, climbing from around $110 per share to almost $130 a share. The stock has been setting new record highs recently and continues to trade close to the recent highs. Of course analysts are as positive on the company as always, and most see only upside in the stock for the rest of the year.

In a report dated Dec. 18, Citi analyst Jim Suva provided six reasons they think Apple stock will move higher. For one thing, he says the company’s device sales have continue to accelerate. He explains that mobile carriers’ decision to allow subscribers to upgrade early has certainly helped, as have the bigger screens on the iPhone 6 and 6 Plus and new features like better battery life, the improved camera and Apple Pay.

He points out that the shipments of 75.4 million iPhones during the December quarter represent 20% to 25% of the entire iPhone installed base at the end of the September quarter. It’s also less than 5% of the total smartphone installed base, which is 2.2 billion. As a result, Suva thinks Apple will continue to see momentum in device sales.

He’s expecting the company to ship 216 million iPhones in all of this year. That’s meaningfully ahead of the broader industry growth rate of 15% to 20%.

The Citi analyst noted that Apple’s 15% return so far this year compared to the S&P 500’s 2% return does cause investors to question whether there will be more upside. However, the company’s price to earnings multiple is only 15 times or 12 times on an adjusted net cash basis. That’s lower than the S&P 500’s 16.6 times and the 12 to 13 times median for the company’s peer group and 18 times for Google Inc.

He is expecting Apple to up its share repurchase program to $120 billion, which should make the company even more attractive to investors.

Apple’s gross margins on the rise

Gross margins have long been a key metric for Apple, and the Citi analyst expects to see them continue rising. As other analysts have said in the past, Suva expects consumers to increasingly shift toward the higher margin, more expensive iPhones with more storage, mainly because of the improvements to the camera.

He points out that Apple’s latest earnings report indicated a 39.9% gross margin, compared to 37.9% in the same quarter a year earlier.

Jim Suva also likes Apple Pay and Passbook, and he believes there’s “tremendous upside potential” here. In fact, he highlights a number of alternative users that could drive adoption. For example, Delaware and Iowa are considering digital driver’s licenses. Theoretically, consumers could store their driver’s license in Apple’s system. Apple Pay is also accepted by many federal agencies, like national parks. Later on, social services could also accept it. Additionally, hotels could follow Starwood in using Apple Pay or Passbook for digital room keys.

Enterprise is also increasingly important for Apple and other smartphone makers, and Citi analyst sees traction in this area and expect more investments to make further traction. He especially likes the deal with IBM for building enterprise apps and says it will probably play a key role in Apple’s growth in enterprise customers.

Finally, Jim Suva suggests that the Apple Watch could drive upside for Apple shares. He lists this as a “bonus reas” saying it’s because he doesn’t like what people are saying about the one-day battery life and the lack of built-in GPS. He do expects Apple to eventually focus on those concerns, but he doesn’t expect it until the next model next year.

Citi has a Buy rating and $135 per share target price on Apple.

Also this week, analyst Amit Daryanani at RBC Capital Markets raised the firm’s price target from $130 to $140 per share just to keep up with Apple’s rapidly rising stock price. If the analyst hadn’t increased their price target, it would probably be underwater soon, as RBC has an Outperform rating on Apple stock.

Like the Citi analyst, Daryanani liked Apple management’s recent comments regarding their capital return plan. He estimates that Apple could return up to $65 billion each year to investors starting in the 2016 fiscal year without batting an eye.  Additionally, he expects Apple to accrue $66.6 billion in the current fiscal year.

It does seem as if increases in both dividends and share repurchases are on the horizon, judging by Apple CEO Tim Cook’s comments on the company’s last earnings call. The company was already sitting on $179 billion in cash at the end of December, so it should be easy to plan a significant increase.

Daryanani believes Apple will return all of its free cash flow through dividends and share repurchases, which would then pay for the dividend increase. He expects the increase to be about 50%, which would result in a 2% yield. 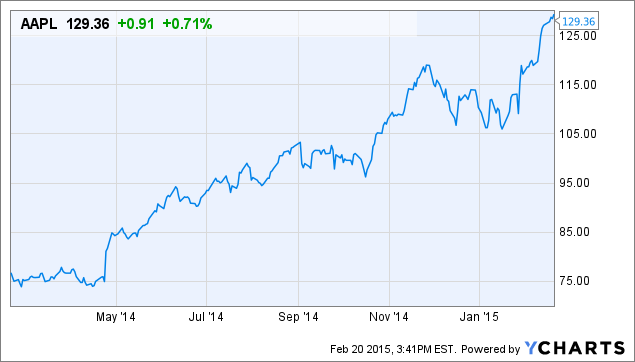