Today, numerous analysts at Feltl and Company provided their inputs for what they think are the best Buys this year.

The first report comes from analyst Mark Smith, which maintained a Buy rating on shares of Cabela’s Inc. (CAB), and a $73 price target. Smith noted, “We think management’s guidance is for double-digit revenue growth in 2H:14 is attainable. Management’s guidance implies 25%-40% EPS growth in 3Q:14 and even higher growth in the important 4Q:14. We think the strong sales and earnings growth in 2H:14 will continue into 2015”. He also believes that “shares are attractively priced at 14.8 times our 2015 earnings estimate”.

According to TipRanks.com, which measures analysts and bloggers success rate based on how their calls perform, analyst Mark Smith currently has an average return of -2.9% and a 50% success rate. Smith has a 3.7% average return when recommending CAB, and is ranked #2785 out of 3160 analysts. 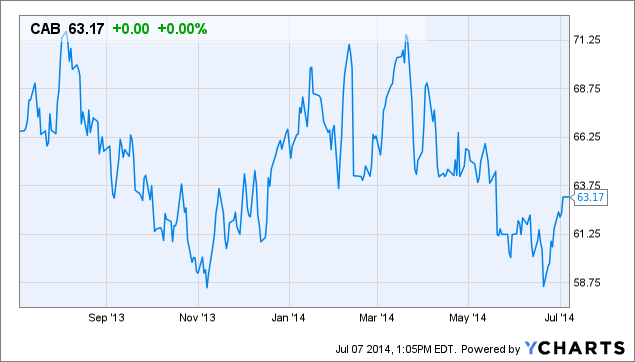 In an additional report by Smith, he reiterated a Buy rating on Kona Grill Inc. (KONA), with a price target of $27.00. Smith wrote, “We think KONA’s restaurant economics are attractive with high sales volume, +19% restaurant-level margin and high”. The analyst went on to say that, “KONA is expanding rapidly with five new restaurant openings this year and up to seven next year. The high growth impedes near-term earnings due to pre-opening expenses and start-up costs, but we think the ROI is attractive and the company will experience high earnings growth over the next several years. The recent equity raise gives the company ample capital to implement its growth plans”.

According to TipRanks, Smith has a 30% average return when recommending KONA, and is ranked #2785 out of 3160 analysts. 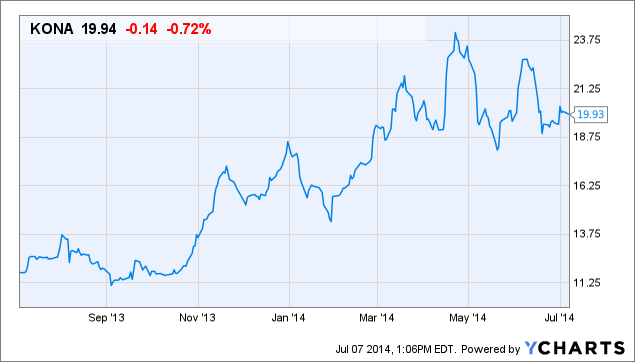 The third report comes from analyst Ben Haynor, which reiterated a Strong Buy rating on Cancer Genetics Inc (CGIX) with a price target of $18.50.  Smith believes “CGIX is a potential acquisition candidate – molecular diagnostics will represent a massive growth area in the healthcare space over the next decade and a number of high-profile acquisitions have occurred in the space recently as larger firms focus on winning the land grab”. The analyst continued, “Proceeds from secondary offerings have given CGIX a strong footing to both expand their sales force and make acquisitions to expand their capabilities and relationships; with their recent acquisition of Gentris, we believe the company now has relationships with 10 of the top 12 biopharma companies worldwide”.

According to TipRanks, analyst Ben Haynor currently has an average return of -9.4% and a 52% success rate. Haynor has a -26% average return when recommending CGIX, and is ranked #3043 out of 3160 analysts. 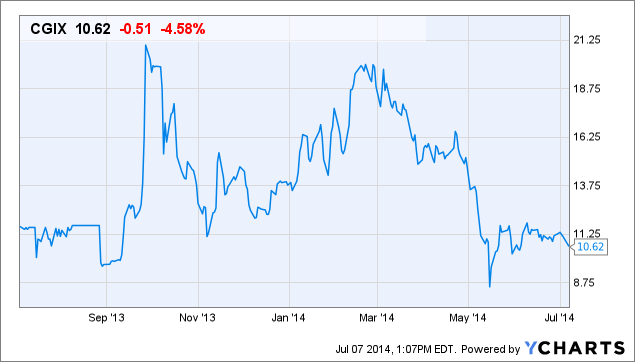 In addition to the previous report, Haynor also reiterated a Strong Buy on TearLab Corporation (TEAR), with a price target of $10.50. Haynor noted, “Dry eye disease affects ~30 million people annually in the US and is the most common age-related eye disease. Management estimates the US market for routine testing is approximately $1.8 billion in the US alone; we see $600-$800 million in immediate US opportunities based upon industry surveys”. Haynor continued, “TearLab has a solid business model which should reach profitability at a revenue run rate of less than $75 million”.

According to TipRanks, analyst Ben Haynor currently has an average return of -9.4% and a 52% success rate. Haynor has a -28.3% average return when recommending TEAR, and is ranked #3043 out of 3160 analysts. 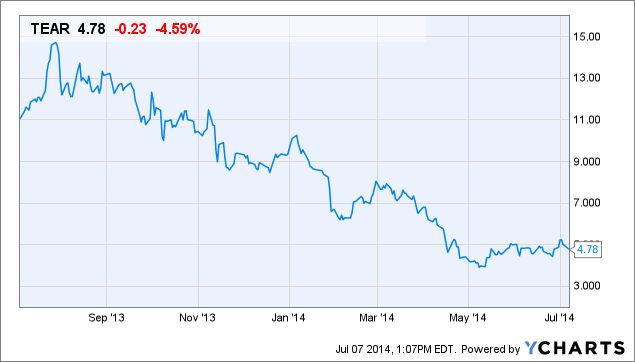 Additionally, analyst Jeffrey Schreiner released a research note on EzChip Semiconductor. (EZCH). Schreiner maintained a Strong Buy with a price target of $34.00 following CY12 where EZCH earned 23% of the total NPU market in revenue which spells out to be $354M. Schreiner wrote, “During CY14 we believe EZCH can grow revenues 46%, year-over-year, following 30% year-over-year growth during CY13. Our estimates imply ~25-30% core NPU growth, with the balance contributed by recent acquisition of Tilera Corporation”. The analyst went on to say, “We recommend investors accumulate shares of EzChip. We believe potential growth opportunities during CY14, and over the longer-term, are not likely reflected in current valuation. We believe EzChip should be viewed as a core small-cap technology holding due to its outsized margin profile and leading market position”.

According to TipRanks, analyst Jeffrey Schreiner currently has an average return of 9.3% and a 67% success rate. Schreiner has a 7.9% average return when recommending EZCH, and is ranked #642 out of 3160 analysts. 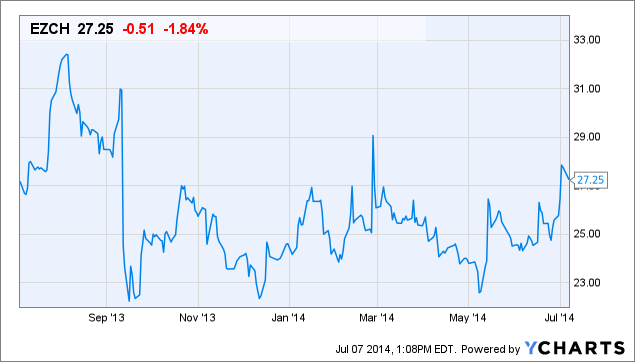 Jeffrey Schreiner has written an additional research report on Synaptics Inc (SYNA). In his report, Schreiner maintained a Strong Buy rating with a price target of $95.00 following the acquisition of Renesas SP. Schreiner wrote “With the acquisition of prior fingerprint sensors, and the recent display driver product line, we believe SYNA’s potential smartphone content may potentially increase from ~$1.75 in CY13, to ~$3.00+ in CY14, with expectations to potentially reach ~$5.00 in CY15. We believe SYNA’s broad product offerings, within human interface solutions, distances the company from prior”. The analyst continued, “During FY15 we believe SYNA revenues can grow ~57%, supported by core touch IC growth, mobile/PC fingerprint sensors, and contribution from recently announced display driver acquisition. This follows estimated FY14 revenue growth of ~41%. Our FY15 non-GAAP EPS estimate of ~$5.90 implies y-y growth ~39%, after estimated FY14 non-GAAP EPS growth of ~36%”.

According to TipRanks, analyst Jeffrey Schreiner currently has an average return of 9.3% and a 67% success rate. Schreiner has a 47.3% average return when recommending SYNA, and is ranked #642 out of 3160 analysts. 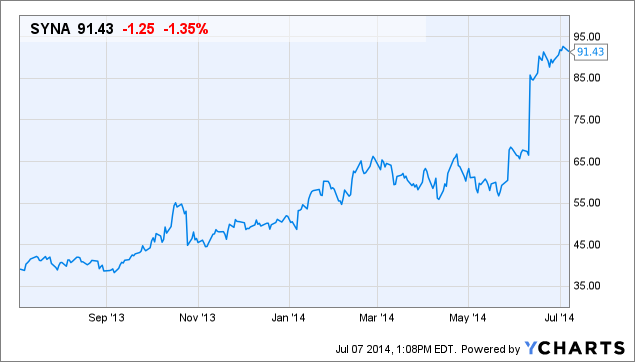 Finally, analyst Brent Rystrom issued a note on Limoneira (LMNR). Rystrom maintained a Strong Buy rating with a price target of $33.60. According to Rystrom, “LMNR’s is in the process of preparing East Areas I and II in Santa Paula, California, for development. We think it is likely that LMNR will sell much or all of its participation in this development. Proceeds should be substantial, approaching or exceeding $100mm. The sale of 550 acres in Santa Paula will leave LMNR with the capital to buy 5000 to 10,000 acres in California’s Central Valley. Within a short period of time this would allow LMNR to nearly triple its EBITDA from agriculture operations”.

According to TipRanks, analyst Brent Rystrom currently has an average return of -0.9% and a 41% success rate. Rystrom has a -14.9% average return when recommending LMNR, and is ranked #2642 out of 3160 analysts. 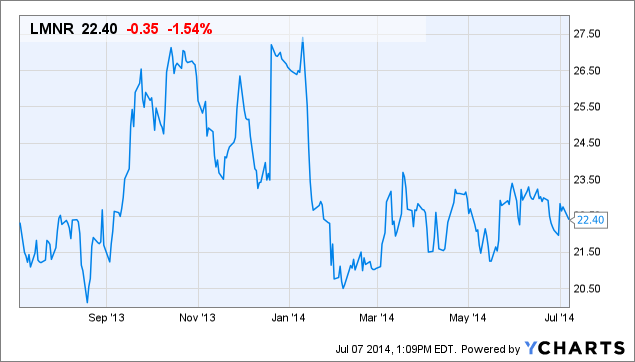 Analyst Brent Rystrom had an additional report on Rentech Nitrogen Partners (RNF). Rystrom reiterated a Buy rating with a price target of $30.00. Rystrom noted, “This planting season appeared healthy and we think RNF will return to sharply improved profitability in its 2Q:14 that ended June 30, 2014. We think RNF is poised for distributions to return to an annualized run rate of $2-$3. The range will be impacted by nitrogen pricing and volumes, the cost of natural gas, and other factors”.

According to TipRanks, analyst Brent Rystrom currently has an average return of -0.9% and a 41% success rate. Rystrom has a -1.9% average return when recommending RNF, and is ranked #2642 out of 3160 analysts. 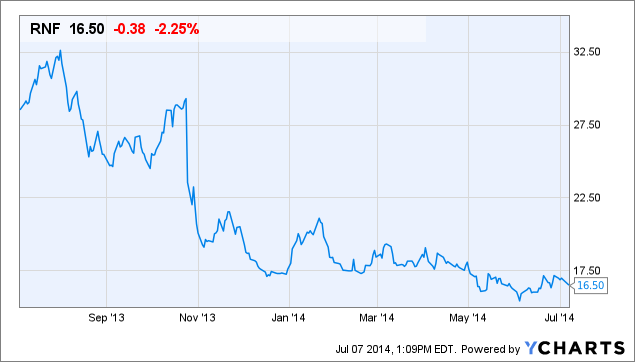 Editor Note: Although the stocks seem like they are a ‘must buy’, you should probably check out these analysts bumpy track records before taking their word in investing in one of these stocks.