Baker noted, “We view DKS as one of the more controversial names in our space. The stock is down 27% YTD, but has been about flat since their big miss reported back in May. In general, bulls see 2014 as a reset year when DKS takes their medicine and reduces exposure to weak categories in favor of better performing products. Bears see pressure from online competition and too much square footage build. In this report, we lay out what we think are the top arguments for and against the stock, listing 7 bull case points and 7 bear case points. We have a Buy rating so generally agree with the bull points, but acknowledge the bear case risks. But we see value in the stock at current levels.”

Seven bull case points
(1) Same store sales and industry data is getting better, (2) the weak golf business is being replaced by better categories, (3) DKS has above average square footage opportunity, (4) DKS e-commerce business is growing and profitability should improve, (5) the worst is behind them, (6) Field & Stream could add growth, and (7) above average earnings growth not reflected in valuation.

(1) Weak industry numbers, (2) too much exposure to hard goods, (3) margins are falling, (4) cap ex is high due to above average square footage growth, (5) vendors are selling more direct (6) ROIC is relatively low versus peers, and (7) difficult 4th quarter comparisons. DKS short interest is 6.5%, about even with where it was a year ago, but down from 10% earlier this year. 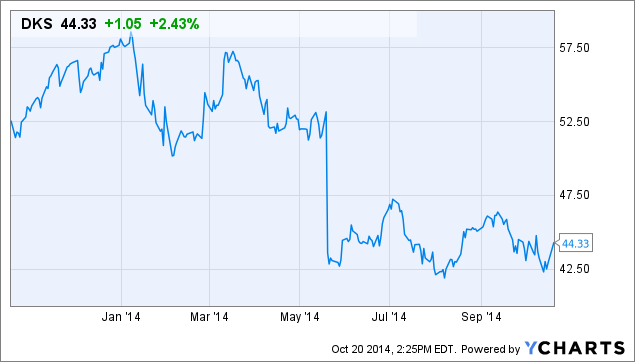