Wall Street analysts are publishing this week their first research reports and ratings on the tech giant Apple Inc. (NASDAQ:AAPL), with mixed ratings.

In a research report published Thursday, FBR Capital analyst Daniel Ives initiated coverage on Apple with an Outperform rating and a price target of $185, which represents a potential upside of 47% from where the stock is currently trading.

Ives wrote, “While Apple remains a widely covered company from a sell-side perspective, we are throwing our hat in the ring with the unique approach of focusing more on Apple’s software, which represents the “crown jewel” embedded in its products/ services and should ultimately help lead it to becoming the world’s first $1 trillion company as mobile device hardware becomes increasingly commoditized.”

The analyst continued, “With the Apple Watch launch front and center this week (pre-sales) as it potentially opens up another growth avenue, we ultimately believe that, at its core, Apple attracts its customers by leveraging the benefits of its closed software ecosystem, driving greater adoption of its devices and services, a positive dynamic and a major ingredient in Apple’s recipe for success. We believe the Street is currently underestimating the top-line/profit growth potential in these key areas with Apple’s all-important software platform at the epicenter of its solutions.”

According to TipRanks.com, which measures analysts’ and bloggers’ success rate based on how their calls perform, analyst Daniel Ives has a total average return of 9.1% and a 60.0% success rate. Ives has a 1.3% average return when recommending AAPL, and is ranked #548 out of 3573 analysts.

Maxim Group analyst Nehal Chokshi also came out with a research report on AAPL, initiating coverage with a Hold rating and a $144 price target. With Apple shares last trading at $124.78, Chokshi’s price target implies potential upside of about 15%.

Chokshi stated, “Based on our discussions with multiple bearish AAPL investors, we believe that fears of ASP and margin compression loom large. However, our survey data indicates that wireless carriers will remain in a “prisoner’s dilemma.” Specifically, we find that ~40% of loyal iPhone users have a similar usage profile to the 11% of current iPhone users who intend to switch away. We define these users as latent switchers, or in other words, those who wouldn’t stay loyal to the iPhone if their carrier stopped carrying it.”

The analyst further commented, “Our analysis indicates that this retention rate is still too low for carriers to walk away from AAPL’s premium pricing terms. Finally, our data on loyal iPhone usage profiles shows little change over the past three years, giving us confidence that latent switcher rates will remain at the current 40% level. Thus, even if Android pricing completely commoditizes, AAPL’s premium price + subsidy should remain intact, and we note that growth of installment plans make the premium pricing even less detectable.”

Apple is scheduled to report earnings on Monday, April 27, and the analysts will most likely focus their attention on the key financial metrics, which will be driven mostly by sales of the company’s iPhone 6 and iPhone 6 Plus devices. 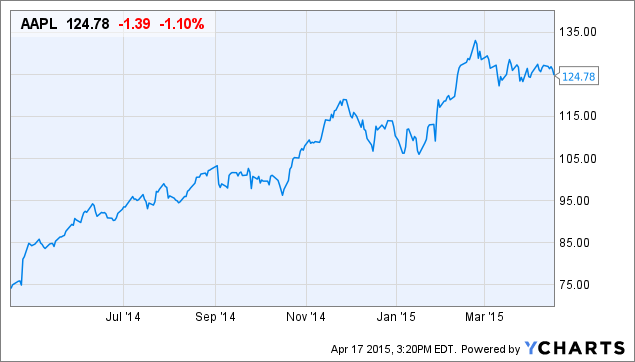