U.S. stocks crashed early amidst a global market sell off but staged a dramatic recovery, helped by a turnaround in Apple Inc. (NASDAQ:AAPL)’s shares. Apple is now positive after being down by as much as 6% early Monday morning. Apple bounced back after CEO Tim Cook reassured investors, in an email exchange with CNBC star Jim Cramer, that Apple’s business was doing just fine even amid the cratering of global markets.

Subsequently, FBR Capital analyst Daniel Ives reiterated an Outperform rating on AAPL, with a price target of $175, which represents a potential upside of 63% from where the stock is currently trading.

Ives wrote, “It has been a miserable, dark period for Apple investors since the company reported June results, as shares are down 25% with negative China sentiment, market fears running rampant, and worries about iPhone 6 growth waning. With panic running wild about China the last few weeks/this morning, many on the Street are now worried that Apple’s growth story is in the rear-view mirror and darks days are ahead.”

“While we acknowledge this “white knuckle” period for Apple (and its investors), (1) with less than 30% of its customers upgrading to iPhone 6 to date, (2) a major product cycle ahead with the launch of 6s (September 9), (3) the China market representing a $100 billion market opportunity for over the next three years (taking a 30% haircut to our estimate) and (4) trading at 8x ex-cash, we believe that Apple is a uniquely compelling name to buy in this hurricane-like market downdraft this morning,” the analyst added.

Furhtermore, “In our opinion, Cook & Co. are about to embark on their next phase of strong growth on an iPhone 6/6s product supercycle and a host of new product categories paving the way for this next chapter of growth into FY16/ FY17.”

According to TipRanks.com, which measures analysts’ and bloggers’ success rate based on how their calls perform, analyst Daniel Ives has a total average return of 3.7% and a 46.2% success rate. Ives has a -15.5% average return when recommending AAPL, and is ranked #1013 out of 3737 analysts. 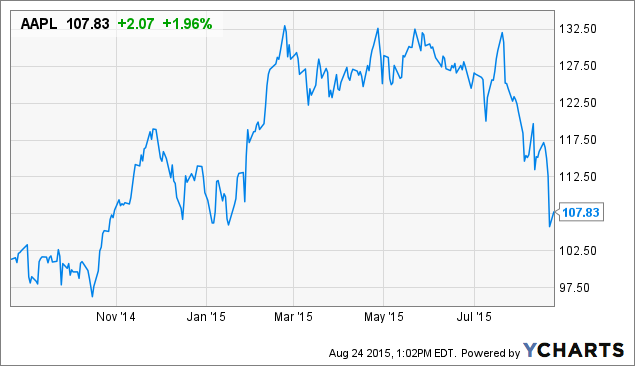