A limited upside in Apple’s (NASDAQ:AAPL) stock price is expected by Pacific Crest analyst Andy Hargreaves, who believes the company needs to come out with a new product or service with “massive new profit opportunity” in order to gain significantly.

“We recommend taking profits in Apple,” the analyst said. Hargreaves’ pricing model is based on earning multiple contraction if the company’s upcoming products do not earn a massive profit. In the recommendation, Hargreaves said that investors should reap profits now, as his target price and rating may be lowered unless next week’s product launch exhibits huge profit opportunities.

Apple is expected to launch the iPhone 6 and a smartwatch in next week’s event. The next generation phone from Apple is expected to sport larger screen and offer a mobile payment solution. Hargreaves is not seeing a payment platform and smartwatch as potent tools to increase the company’s profits. The analyst believes that a new iPhone could boost results in the short-term but that sales could decline in late 2015 and 2016. A decline in sales is seen as a major reason for the limited upside of the stock.

The analyst notes that there is not much room left for Apple stock to gain from current levels, as “potential upside from iPhone 6 is priced into the shares.” However, the analyst still recommends investors to hold some position in the stock up until next Tuesday’s event to see how the new product adds to the company’s profits.

Separately, S&P Capital IQ analyst Scott Kessler said, “We think the shares are fully valued at this point and frankly I don’t think a lot of people are accounting for a potential disappointment coming out of the event next week.” Kessler added that this reflects what people are thinking and that he is concerned about it at this point of time.

After the decline in Apple shares, the company’s market value, which was over $618 billion, dropped by $26.1 billion.  Investors appear not so happy with Apple’s reluctant approach towards innovation, considering the intense competition from rival tech firms. Features that Apple’s iPhone 6 is expected to sport are already integrated into Samsung’s Galaxy and Microsoft’s (NASDAQ:MSFT) Lumia phones. 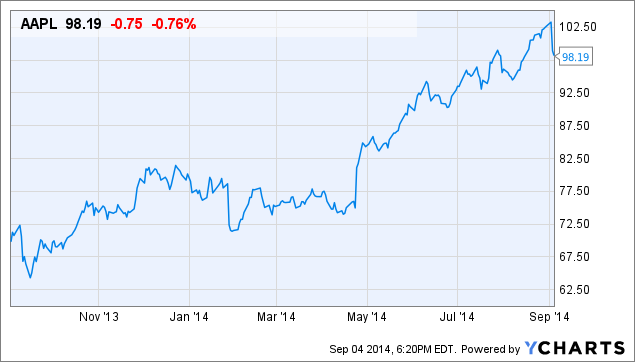