In a research report released Tuesday, Cantor analyst Brian White maintained a Buy rating on AAPL, and raised the price target to $195 (from $180), which implies an upside of 47% from current levels.

White noted, “The momentum of this iPhone cycle is notably stronger compared to those in the past, which we believe is driven by the larger screen sizes of the iPhone 6/6 Plus, combined with strength in emerging markets and the growing attraction of Apple’s robust digital ecosystem. Adding to the allure of this cycle is the ramp of Apple Watch that we believe will prove to be the best selling new product in Apple’s history (within first 12 months). As such, we are increasing our EPS estimates for Apple and raising our 12-month price target to $195.”

After initiating coverage on AAPL yesterday, Brean Capital analyst Ananda Baruah came back today, raising the price target to $170 (from $160), while maintaining a Buy rating on the stock. With Apple shares last trading at $134.6, Baruah’s price target implies potential upside of about 27%.

Baruah commented: “Reiterating our Buy rating and raising our TP as we believe Mar Q results are proof positive that our Buy thesis has teeth. Specifically, we continue to believe that Street numbers are materially low through ’17. Fundamentally speaking, we believe AAPL stands to deliver material EPS upside from 1) iPhone ships through ’17, 2) favorable GM from both iPhones and iPhone mix (more 6 Plus’ than realized), and 3) materially more Opex $ leverage through at least ’16 as AAPL realizes the benefits from the recent iPhone 6 and iWatch investment cycles.”

Furthermore, “As it announced a 50% increase in its capital return program to $200B through Mar ‘17, AAPL should continue to return material capital over the next few years (25% of Cap) that can both catalyze and provide a floor under the stock. Our $170 TP is 13x our ’17 EPS estimate of $12.73.”

Additionally, analyst Gene Munster of Piper Jaffray weighed in on AAPL, reiterating an Overweight rating, while slightly raising the price target to $162 (from $160), which represents a potential upside of 22% from where the stock is currently trading.

Munster noted, “Overall, our thinking on the story is largely unchanged. We believe iPhone 6/6+ is well positioned to gain share (sold 61.2m vs. Street at 57m) in the back half of 2015 and will cause Street numbers to slightly increase and move shares of AAPL higher. We are less concerned about tough comps given investors who have been recently buying AAPL shares (stock up 22% YTD) have been aware of the comps. iPads are still weak, driven by cannibalization from the iPhone and Macbooks. The capital return program was $200B, ahead of our ~ $170B expectation.”

Canaccord Genuity analyst Michael Walkley also joined the crowd today, reiterating a Buy rating on Apple’s shares, and raising the price target from $150 to $155, which implies an upside of 17% from current levels.

Walkley stated, “We believe the strong results and solid guidance are consistent with our surveys and analysis indicating a record iPhone 6 upgrade cycle driven by two primary reasons. First, we believe the iPhone 6 and 6 Plus smartphones are generating very strong replacement sales from existing iPhone consumers who slowed the pace of iPhone upgrade purchases during the relatively disappointing iPhone 5 and 5s product cycles. In fact, with only 20% of the iPhone installed base upgrading to the new iPhone 6/6 Plus devices by the end of Q2/F’15, we anticipate continued strong replacement sales through 2015.”

Furthermore, “Consistent with management commentary, we anticipate continued high-end smartphone market share gains for Apple due to surveys indicating a greater mix of Android smartphone consumers switching to the new iPhones than the iPhone 5 series launches. We believe these trends should grow Apple’s sticky iPhone installed base to half a billion users during 2015 and this large base bodes well for future strong iPhone replacement sales, earnings, and cash generation. Consistent with these expectations, Apple expanded its capital return program to a remarkable $200B.” 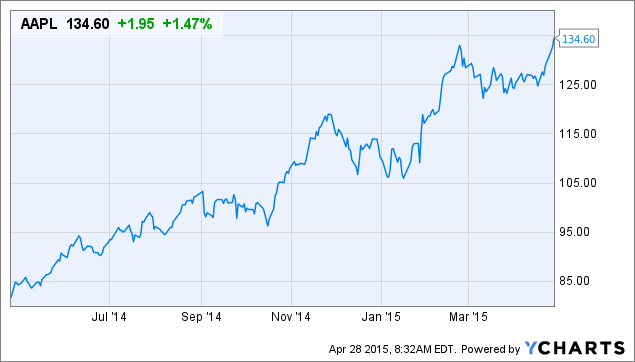