About the Author Carly Forster

Content Manager at TipRanks. Earned a Bachelor of Arts Degree with a Major in Communications at the University of California, San Diego.

Apple, Inc. (NASDAQ: AAPL) is a Cupertino, California based multinational corporation that designs, develops, and sells consumer electronics, computer software, and personal computers. Some of the most known Apple products are the iPhone, iPad, MacBook, and iPod. The technology giant has been working diligently on supplying its iPhone 6 and iPhone 6 Plus to 36 more countries and territories by the end of this month. In addition to this, Apple is expected to unveil new products such as the iPad Mini, iPad Air, MacBook Pro, and iMac at a press event on Thursday, October 16th.

After the huge success of its press event last month, many are eager to see what Apple will unveil at its press event scheduled for this Thursday. It is being rumored that the technology giant will reveal its new iPad Mini, iPad Air, OSX Yosemite, Apple TV, and finally launch the much anticipated Apple Pay. The event is begins at 1pm EST and will stream live on its website.

On October 13th, Cannacord Genuity analyst Michael Walkley reiterated a Buy rating on Apple with a $115 price target after he theorized an increase in demand for the iPhone 6 and iPhone 6 Plus despite supply constraints. He noted, “Despite demand currently much stronger than Apple’s ability to supply the iPhone 6 and 6 Plus, we maintain our iPhone estimates.” Walkley is currently ranked #3 out of 3353 analysts on TipRanks, earning a 68% success rate recommending stocks and a +20.6% average return per recommendation. He has also rated Apple 65 times, earning a 72% success rate recommending the stock.

Separately on October 14th, Credit Suisse analyst Kulbinder Garsha maintained a Neutral rating on Apple and raised his price target from $96 to $110. He reasoned, “We still see rising BOM costs for the iPhone 6/6 Plus along with yield issue as GM headwinds for the new iPhones. However, we now anticipate two positive drivers that more than offset this. First, we see a material mix shift to 64GB devices (given larger screen real estate, and the absence of 32GB version for the new products), which we estimate will lead to iPhone 6/6 Plus 64GB models to account for 67% of total volumes in FY15. Second, the iPhone 6 Plus could sustain a 17% of mix, and given this product is GM accretive, this could represent 21% of iPhone GPs in FY15.” Garcha currently has a52% success rate recommending stocks, earning a +2.6% average return per recommendation.

On average, the top analyst consensus for Apple is Moderate Buy. 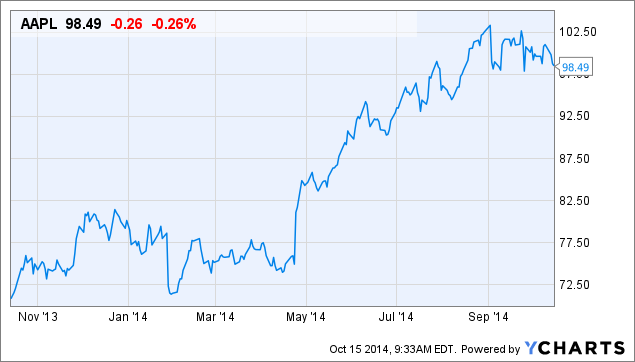