Analyst Vs. Analyst: Intuit Inc. – Who Do You Side With?

Intuit Inc. (NASDAQ: INTU) is a Mountain View, California based American software company that develops financial and tax preparation software and associated services for small businesses, accountants, and individuals. On August 21st, the company released its fiscal fourth quarter report, which ended July 31st, and its results were rather limp. Correspondingly, Intuit has forecasted a much larger first-quarter loss, citing restructuring in its small business group unit.

During its Q4 results, Intuit reported -$0.01 Non-GAAP earnings per share, missing analysts’ consensus estimate of $0.07 by $0.08. During the same quarter last year, the company posted $0.00 earnings per share. Intuit had a profit of $714.00 million for the quarter, compared to analysts’ consensus estimate of $699.49 million. The company’s revenue for the quarter was up 12.6% on a year-over-year basis. On average, analysts expect that Intuit will post $3.97 EPS for the current fiscal year.

A reason for Intuit’s limp quarter is likely due to its transition of expanding its online services and building on its revamped QuickBooks Online accounting software for small businesses. The company is completely focused on a Cloud Platform strategy to accelerate long-term growth. Intuit President and Chief Executive said in its earnings report, “We’re fully committed to winning in the cloud, with more than 30 million Intuit customers using these offerings anywhere, anytime across a variety of devices. The benefits are clear: online experiences are better for customers, expand the total addressable market, and generate more predictable, recurring revenue streams.” He continued, “Our acceleration to subscription services and the changes to how we’ll develop desktop products beginning in fiscal 2015 will result in recognizing desktop revenue over time instead of as up front license revenue, as we’ve historically done. This creates a transition year in fiscal 2015 for reported financial results. We fully expect fiscal 2016 results to return to double-digit top and bottom line growth.”

On August 22nd, Raymond James analyst Wayne Johnson maintained a Strong Buy on Intuit and raised his price target from $89 to $100. Johnson has a +16.2% average return on all stocks he has rated and a 69% success rate in making recommendations. He has also made a recommendation for Intuit 6 times, helping him earn a +21.3% average return on the stock.

On the other hand, on August 20th, Morgan Stanley analyst Jennifer Swanson reiterated an Underweight rating for Intuit, but raised her price target from $66 to $72. She noted, “We expect an in-line Q4 as focus shifts to guidance. For FY15, we believe management will provide a conservative initial view given model transitions in [QuickBooks] and rebuilding in Consumer Tax.” Swanson has a +5.6% average return on all stocks and a 55% success rate in making recommendations. She has also rated Intuit 4 times, attributing to her -9.7% average return on the stock.

While one analyst see’s a great potential upside in Intuit, the other see’s the exact opposite. Who’s recommendation do you trust? 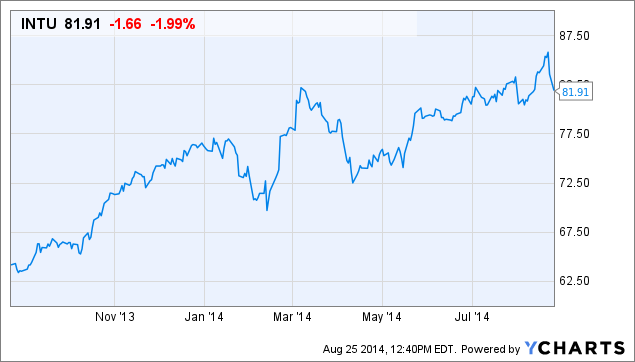