Analyst Vs. Analyst: Herbalife Edition – Who Do You Side With?

Today we are going to be having our first analyst versus analyst special, featuring Wedbush analyst, Rommel Dionisio versus Argus analyst John Staszak. Today the company of discussion will be Herbalife (HLF), a nutrition company which was founded in 1980. The company operates in over 90 countries and it sells nutrition, weight-management , energy and fitness, and personal care products.

Herbalife has been in the news due to recent accusations of it operating a pyramid scheme. For those who don’t know what a pyramid scheme is, it is a type of investment where each paying participant recruits two further participants, with returns being given to early participants using money contributed by later ones. A pyramid scheme is widely regarded as an unsustainable business model and it is also illegal.

According to the New York Times, the ongoing investigation on Herbalife was prompted by requests from members of Congress and civil rights organizations, though some of these groups have apparently received funding from Bill Ackman, a staunch opponent of Herbalife The investigation is on the allegations of a pyramid scheme and on the percentage of sales that the company makes to consumers outside its network. If a company earns more than half of its revenue from outside consumers, it is generally not considered to be a pyramid scheme.

Our first analyst, Rommel Dionisio of Wedbush, who has a bullish stance on investing in Herbalife, sees the stock outperforming and has a $90.00 price target. This is despite the allegations of a pyramid scheme, which Dionisio claims to be “largely unfounded”.  He believes that “channel checks indicate strong momentum in the U.S. business, driven by solid recruiting trends and a successful new product launch”.

Mr. Dionisio has been working at Webush since February of 2005. He has over 17 years of experience.

According to Dionisio, while the stock should be under some pressure near-term due to such allegations, along with a lack of audited financials given the recent resignation of long-time auditor KPMG under an insider trading scandal, he believes the current historically low valuation multiple on the stock could prove to be an attractive entry point for a longer-term oriented investor.

Our second analyst, John Staszak of Argus, is not recommending to buy the stock solely because of the announcement of investigations into the company’s business practices by the Department of Justice and the FBI.

Mr. Staszak, earned an MBA from the University of Texas and a BA in Economics from the University of Pennsylvania. In the financial services industry, he has worked as an analyst and consultant for firms including Standard & Poor’s, the Bank of New York, Harris Nesbitt Gerard and Merrill Lynch. John is a CFA charterholder. Forbes magazine named John as the second-best stockpicker among restaurant analysts in 2006.

Staszak noted, “The business of marketing weight-management and nutrition products is highly competitive. This market segment includes numerous manufacturers, distributors, marketers, retailers and physicians actively competing for business both in the United States and abroad. The market is highly sensitive to the introduction of new products and weight-management plans, including prescription drugs. In addition, any negative publicity regarding the company’s products, or any ingredient used in its products, could significantly hurt sale. The current management team has had some success in stabilizing the company’s sales force, but we believe that this is likely to be an ongoing issue given its multilevel sales structure. The company is also vulnerable to legal actions contesting the legality of its marketing practices, and is currently being investigated by the FTC and the DOJ”.

But now for the real question. Which analyst has the better proven track-record when recommending Herbalife?

According to Tipranks.com, Rommel Dionisio has had a 24.8% average return on profit when recommending Herbalife. He first started recommending the stock on May 17, 2013, when the stock was worth only $42.85, and if one would have listened to Dioniso since May 2013 they would have made nice profits. Dionisio is currently ranked #155 out of 3155 analysts.

According to Tipranks, John Staszak has a -30.7% average return on profit when recommending Herbalife. He first started recommending the stock on May 21, 2013, when the stock was worth $44.14. Staszak is currently ranked #151 out of 3155 analysts.

After looking at Tipranks statistics it is clear that one would have made much more money until now if they had taken Dionisio’s advice rather than Staszak’s advice. However, Herbalife’s current situation is different than usual as it is under investigation for operating a pyramid scheme. 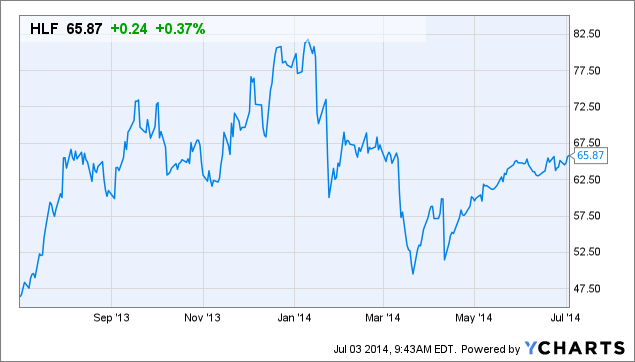