William Blair analyst Mark Miller was out today with some bullish comments on Amazon (AMZN), reiterating his Outperform rating following AMZN’s second-quarter results that were strong – in line with or better than expectations in almost every respect. However, the shock and awe for investors relates to Amazon’s anticipated third-quarter loss.

In his special report, Miller commented: “While there is some debate about whether growth should be accelerating faster in this investment cycle, we estimate the underlying metrics are improving. Backing out the near-term adverse impact from the AWS price reductions, ecommerce gross profit accelerated to 31% in the second quarter versus 28% in the first quarter, despite the collection of state sales tax in Florida beginning in May. More Prime members were added versus the same period last year, despite the membership fee increase”.

He continued, “In our view, the e-commerce moatis widening with multiple network effects, faster fulfillment, and more connections for the consumer into the Amazon ecosystem. We are less excited about digital content investments, which will represent more than $100 million of the stepped-up investment in the third quarter. Returns from the Amazon Fire phone are also unclear at this early stage, although we recognize that to dominate in ecommerce, the company needs to winin mobile. AWS is one of theultimate fly-wheel, scale-driven businesses, and it has huge long-term potential for the company. Thus, while it is unsettling in the extent towhich it is depressing earnings in the short term, we believe Amazon is creating sustainable value in the business and reinforcing key technology advantages across the enterprise. We recommend long-term investors take advantage of stock weakness withhigher investment spending; Amazon’s market share gains and value creation are likely still in the early innings”.

According to TipRanks.com, which measures analysts and bloggers success rate based on how their calls perform, analyst Mark Miller currently has a one-year average return of 3.8% and a 59% success rate. Miller has a 3.5% average return when recommending AMZN, and is ranked #1422 out of 3222 analysts. 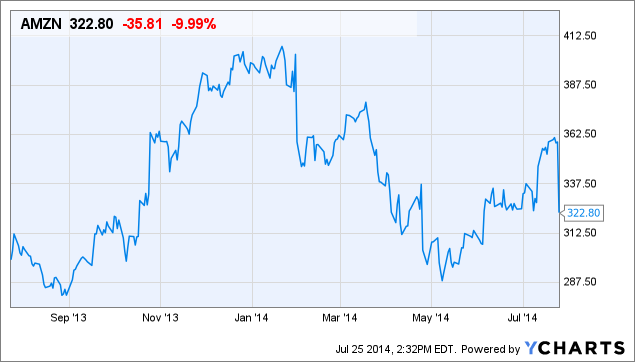