In a research report issued Thursday, Canaccord analyst Corey Davis initiated coverage with a “Buy” rating on Actavis plc (ACT) and a price target of $275.00 a share, representing a potential upside of 24% from where the stock is currently trading.

The following bullets contain highlights from Davis’ justification for his initiation:

“Now that ACT has pulled back off its all-time high of $227 in February but is climbing very quickly back towards it, we think the stock has regained momentum. With the accretion from the Forest acquisition, it’s trading at only 13.3x our 2015 EPS estimate of $16.76. Further, with our projected EPS CAGR of 17% from 2014-2018 (and an even higher growth rate from 2013-2017 of 25%), the PEG ratio is a very low 0.8x. Looking at the comparables and using consensus estimates, the average CAGR for the group from 2013-2017 is 17.5% compared to 21% for Actavis (even higher at 25% using our estimates.) In our experience, Spec Pharma stocks only trade at less than 1x their growth rate when there are serious doubts about the projected growth due to either possible earlier than expected generics, or estimates that include not yet approved products. Neither of these two apply in this case, and since we think Actavis should trade at least 1x its long-term growth rate, which we model at 17% from 2014-2018, this translates into a $289 stock off our 2015 EPS estimate. This is even above our official $275 target that our DCF derives”, Davis wrote.

According to TipRanks, which measures analysts and bloggers success rate based on how their calls perform, analyst Corey Davis currently has an average return of 41.3% and a 48% success rate. He is ranked #25 out of 3133 analysts. 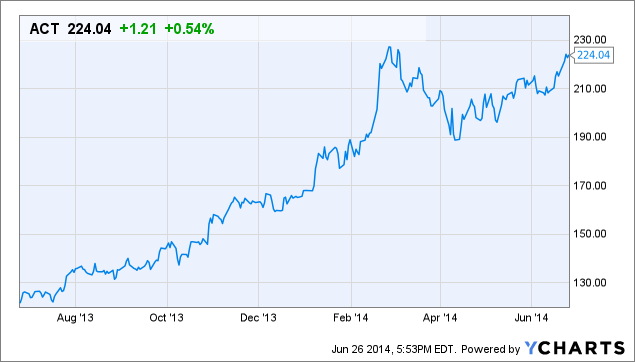