As a resident of New York State’s Hudson Valley, I have met dozens of local citizens who worked for International Business Machines Corp. (NYSE:IBM) in its heyday. A massive set of layoffs in 1993 meant that Big Blue’s local presence is now almost gone, and the local economy has yet to recover.

Two decades later, IBM is still backpedaling. A current initiative, known as Project Chrome, is culling another 100,000 employees from IBM’s global employment base. In some respects, CEO Ginni Rometty has no choice. IBM’s revenue base has already peaked and is expected to drop a precipitous 10% this year to around $83.5 billion.

Why is IBM so unpopular with many tech analysts? The company’s focus on slashing expenses and buying back massive amounts of stock to maintain earnings per share is considered to be a last-ditch attempt to artificially maintain investor support.

But it’s not working. Shares of IBM have lagged the Nasdaq Composite index by 91 percentage points over the past three years. 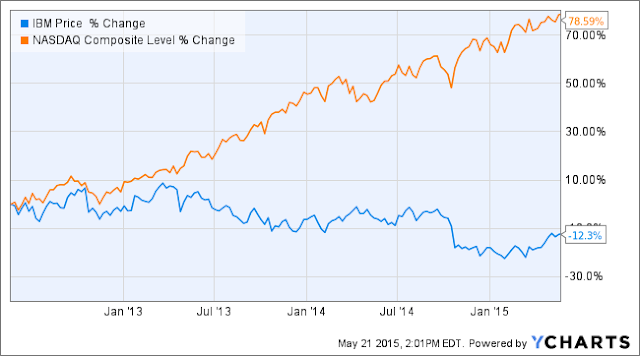 Curiously, IBM still has one major investor in its corner. Warren Buffett, and his management team at Berkshire Hathaway Inc. (NYSE:BRK.A), have been consistently buying more shares, insisting that Big Blue’s obituary notices are premature.

In the middle of 2011, Berkshire Hathaway owned 25 million shares. By the end of 2013, that stake had increased to 68 million shares, and thanks to ongoing subsequent purchases (as recently as the first quarter of 2015), Buffett’s firm now owns 79.6 million shares. That equates to a $13.8 billion investment. Even for Warren Buffett, that’s real money.

What does he see that most others are missing? It would be easy to attribute his ardor to IBM’s still-prodigious free cash flow, which stood at $8.4 billion last year. Still, that figure has declined for three straight years as lucrative legacy contracts roll off.

Instead, Buffett has repeatedly characterized IBM as a good company enduring a challenging transition. The fact that his firm is still buying yet more shares in recent quarters is a testament to his faith in CEO Rometty, who has been at the company’s helm since January, 2012.

These days, she is boosting the pressure on IBM’s management teams to re-invent the company’s role in the technology landscape. The company has been shedding various hardware divisions in recent years, which enabled gross margins to exceed 50% in 2014 for the first time in the company’s history. In fact, IBM’s gross margins have risen for 10 straight years.

For a while, that had a beneficial impact on the bottom line. IBM’s earnings per share rose at a double-digit clip every year from 2005 through 2012. Of course, some of the EPS gains stemmed from large share buybacks (which have reduced shares outstanding by 40% over the past decade). Yet now that EPS growth has stalled out, few think of the company as a growth story anymore.

Rometty’s new managerial focus: make an aggressive push into cloud computing and other buzzworthy niches. Yet it’s important to note that the hottest tech niches are quite saturated. In cloud computing for example, price wars have led to eroding profit margins for firms like Amazon.com, Inc.

Instead of replicating the best practices utilized by other major tech firms, IBM needs to cultivate a completely distinct business model. And that may start with the company’s base of intellectual property.

For the past two decades, IBM has issued the most patents of any company in the world. The real challenge: convert that research into products and services that garner robust margins and a wide moat around the company’s customer base.

Curiously, IBM doesn’t appear committed to using its heavy R&D spending as a lure for new customers. Instead, it sees the technology base as a way to lure partnerships with other leading tech firms such as Apple, Inc. and Facebook, Inc. For example, it is tailoring its analytics services division to help develop better customer insights for those two aforementioned partners.

How will IBM’s attempts at re-invention play out? We’ll find out in coming quarters. The onus is now on Rometty and her staff to unveil bold products and strategies. CEOs that fail to deliver a transformation don’t tend to stick around much beyond three or four years.

Risks To Consider: As IBM sheds staff in a bid to be more nimble, it risks cutting into operational muscle and may end up finding itself with other tech also-rans such as Computer Sciences Corp. and CA, Inc.
Action To Take

Its not fully clear that Buffett and his team like IBM for its transformational potential, or simply for its ability to boost dividends and buy back stock at a vibrant pace. The legendary investor typically steers clear of companies that simply pursue financial engineering to meet targets. The appeal of IBM likely lies somewhere between those two pillars.

The real reason to own this stock for the long-term is indeed the potential for organic growth through innovation. It’s not yet clear that CEO Rometty will be able to accomplish such a turnaround. Still, the fact that Buffett keeps buying more shares indicates a “all hope is not lost” sentiment. History will vindicate his supportive stance, or IBM will turn out to be a black mark on an otherwise impressive investment track record.