Why is Amazon.com, Inc. Finally Going to Reveal How Much its Cloud Business Makes? (AMZN)

Amazon.com, Inc. (NASDAQ:AMZN) is finally ready to reveal the revenue and profitability of its secretive cloud business. The announcement is expected to be included on the company’s first quarter earnings release scheduled for Thursday after the closing bell.

Up until now Amazon has included Amazon Web Services (AWS) in its “North America – Other” segment for financial reporting purposes. That means we don’t know exactly how much revenue it’s generating, but we can arrive at an educated guess.

During 2014 the “North America – Other” segment raked in $5.4 billion in revenue and grew 45% from 2013. AWS probably represents the majority of the segment and could account for as much as $4.5 billion according to a recent report published by Sanford Bernstein analyst Carlos Kirjner. Kirjner also noted that he expects AWS to reach at least $20 billion in annual revenue by 2020, which makes it an important growth driver for the near term future.

Why is AWS important?

Cloud computing is a buzzword, but the reason it’s fought over so fiercely is seldom explained. Competition from tech stalwarts like Google and Microsoft has driven the price of cloud storage down dramatically. So why do these companies spend so much money trying to acquire cloud service customers?

Cloud computing and software as a service (SaaS) businesses tend to be extremely sticky. Once customers are roped into one supplier’s cloud ecosystem which includes software, services, and its platform, it becomes costly for those customers to leave. Amazon has planted itself right in the center of the tech world as many startups depend on AWS.

After customer acquisition costs are accounted for those heaps of recurring revenue could spill over to the bottom line and make meaningful improvements to Amazon’s overall profitability.

Does that mean Amazon will make a profit this quarter?

Maybe, but Wall Street doesn’t think so. The Wall Street consensus is that Amazon will lose 12 cents per share this quarter. Contributors on Estimize are predicting profits of 1 cent per share. In the first quarter of last year Amazon recorded 23 cents in EPS. 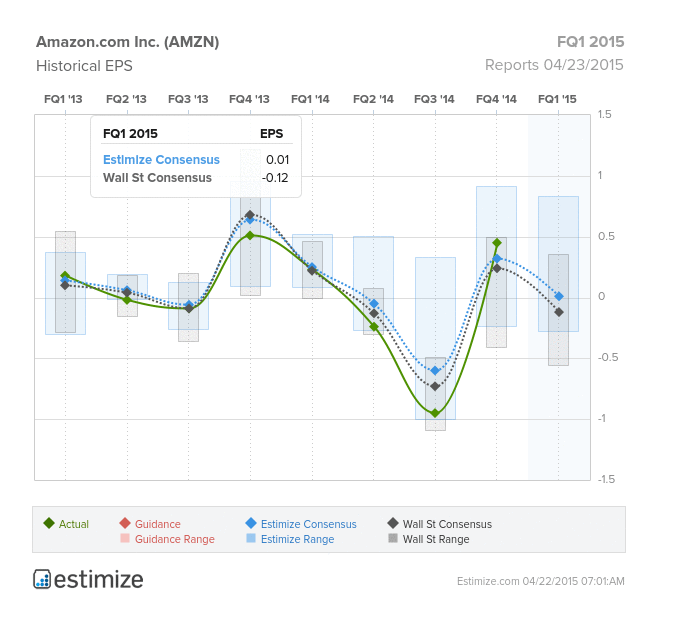 Investors who are interested in short term earnings growth shouldn’t be looking at Amazon anyway. CEO Jeff Bezos has from the beginning taken cash from Amazon’s profitable businesses and reinvested it into opportunities which may payoff in the future. Amazon could finally be breaking out its AWS numbers to show shareholders where the company’s profits are going and to show-off the growth gained in return.

How does revenue look this quarter?

Amazon’s earnings are difficult to predict because the company pumps so much of the cash it generates back into the businesses it wants to expand. That makes revenue a more reliable way of measuring Amazon’s short term success. 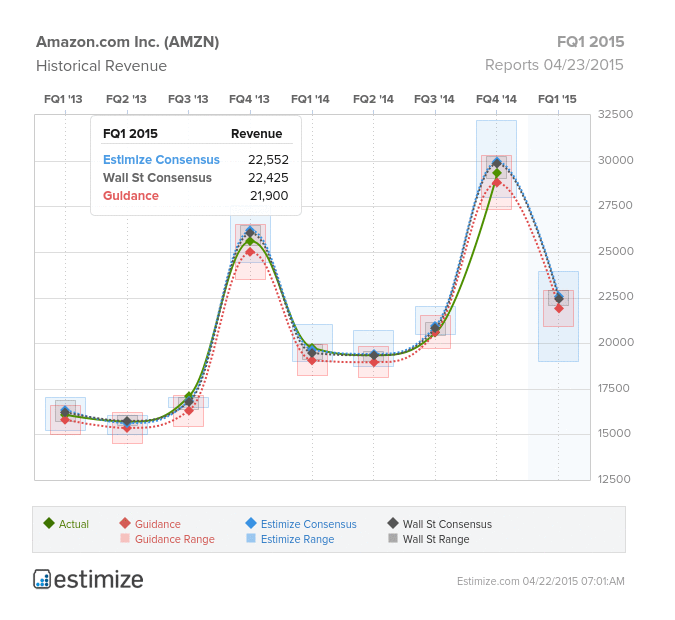 When it comes to total revenue Estimize contributors are saying the same thing Wall Street is, revenue should be up 14% year over year. 14% revenue growth for Amazon would be slightly worse than last quarter’s disappointing revenue print (15% growth) and would mark a 2 year low.

One possible and cynical explanation for why Amazon is going to disclose AWS’s performance is that it wants some good news to share with investors. Even though Amazon came up lighter than expected on sales last quarter, the company was able to push its bottom line higher which gave shareholders something positive to talk about.

Amazon’s rate of revenue growth is expected to a hit a two year low and earnings are forecasted to come in near break-even. With financial measures down now might be the time to show investors where the company’s money is going and lay out a plan to transform AWS into a critical and massive piece of Amazon’s future.