When investors talk about stocks LinkedIn Corp (NYSE:LNKD) often gets lumped together with the social media companies. It gets compared to Facebook Inc(NASDAQ:FB), Twitter Inc (NYSE:TWTR), and Yelp Inc (NYSE:YELP), all of which (except perhaps Facebook) are criticized for not making enough money despite having massive user bases.

After the closing bell today LinkedIn will have the opportunity to ditch the negative connotations that come with the social media label.

Facebook has clearly figured out a monetization strategy that works, but generally speaking social media companies are patronized for not being able to generate enough cash per user. Soft revenue figures across the board this quarter have emboldened the bear thesis on rich valuations.

The thing that makes LinkedIn special is that they’re not an ad driven company in the way that its peers are. Facebook and Twitter generate nearly all of their revenue from advertisers. Even though we think of LinkedIn as a social network that leverages massive scale, it’s business model is completely different than the companies it’s compared to. 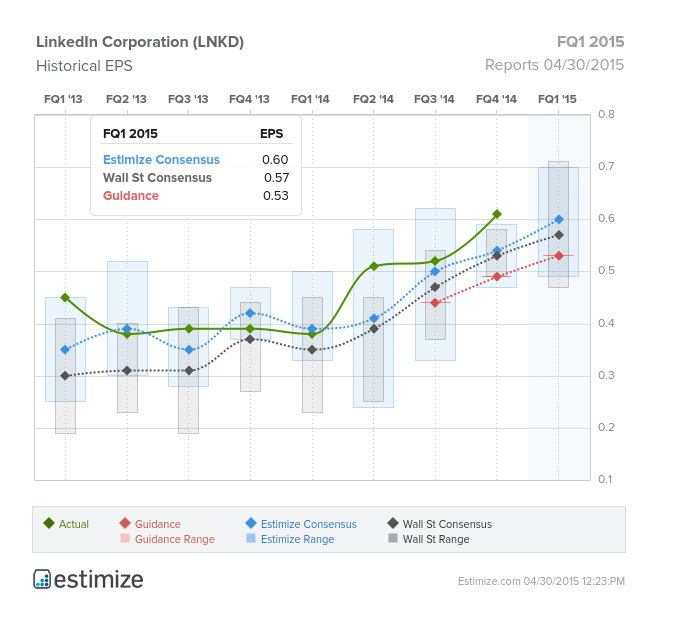 LinkedIn posted an awesome fourth quarter and less than 25% of its revenue came from its advertising segment, Marketing Solutions. LinkedIn’s main source of cash (57%) is its recruiting platform, Talent Solutions.

After the closing bell Estimize contributors are expecting LinkedIn to report earnings of 60 cents per share on $649 million in revenue. Even after the misses from LinkedIn’s peers expectations for this quarter remain significantly above the Wall Street consensus of 57 cents in EPS and $638 million in sales.

It’s easy to get lazy and talk about stocks in groups with their peers. LinkedIn gets thrown in a bucket with Facebook and Twitter despite having completely different strategies. A big report from LinkedIn today could deliver the company from all the flack it gets for carrying the social media banner.