Even though the new game has been a success in the sense that it’s helped the company top analyst expectations, fundamental growth at King is non-existent and the company is often criticized for its dependency on Candy Crush. Earnings and revenue are both projected to fall compared to same quarter results of last year.

Revenue fell by 7% last quarter too. Even though King Digital’s monthly active user (MAU) count is increasing and the average spend per paying customer is growing, total revenue is still falling. This implies that the number of paying customers is actually shrinking. From FQ4 2013 to last quarter King’s quarterly average monthly unique payers dropped from 12.2 million to 8.3 million. Fewer users are purchasing micro transactions within King and that’s a strike against the company. On the other side of the fence King has done fairly to diversify its revenue sources. In one year Candy Crush went from making up 78% of the company’s revenue to 45%. That also means that the earnings power of Candy Crush is shrinking faster the rate of decline in total revenue suggests.

After IPO’ing to fanfare with a lot of hype around the Candy Crush franchise, King Digital is now trying to cement itself as a mature player in the mobile games category with a diverse portfolio of offerings. In the past two quarters expectations were set too low and King hurdled them with ease sending its share price higher. The bear caricature of King Digital as a one hit wonder company entirely dependent on Candy Crush is overblown.

Beating low expectations in the third and fourth quarter of 2014 has been enough to stabilize and even increase King’s stock price. Still King will need to prove that it can get its earnings growing again to please investors. 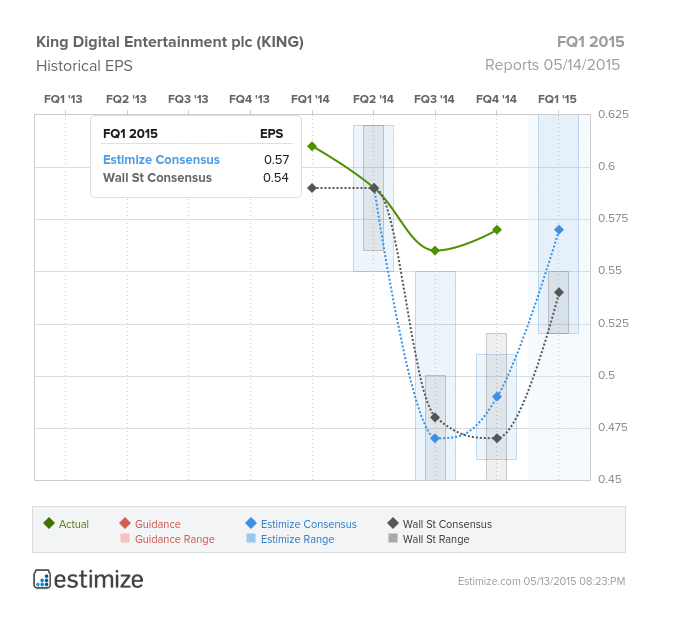 This quarter contributing analysts on Estimize expect King to earn 57 cents per share on $600 million in revenue. That would be a 4 cent decline in earnings and a $6.7 million drop in revenue compared to the same quarter of last year. Wall Street is looking for 54 cents in EPS and $592 million in sales.

The takeaway is that King’s Digital’s earnings and revenue aren’t growing. That’s undeniably true. But King has made demonstrable progress in reducing its own addiction to Candy Crush. The next step for King is to focus on increasing the number of customers who actually pay to play King’s freemium games. The challenge for King is that the freemium mobile games space is welcoming new competitors each day and that landscape is becoming increasingly crowded.