Is It Time To Buy Micron Technology, Inc. (MU)?

The past year has been one to forget for Micron Technology, Inc. (NASDAQ:MU) and the semiconductor industry. In the past 12 months, shares fell 33.3% thanks to four consecutive quarters of declining earnings. Year over year comparisons have performed just as poorly, and last quarter Micron reported a 106% decline on the bottom line and 30% on the top. The company has faced a number of obstacles including a sluggish PC market, stiff competition and currency headwinds which should weigh down FQ3 earnings.

The Estimize consensus is calling for a loss of 8 cents per share on $2.95 billion in revenue, 2 cents higher than Wall Street on the bottom line and right in line on the top. Compared to a year earlier this reflects a 114% decline in earnings and 23% in sales. Estimates have plunged since Micron’s last report, reflecting analyst’s pessimism towards earnings this quarter. 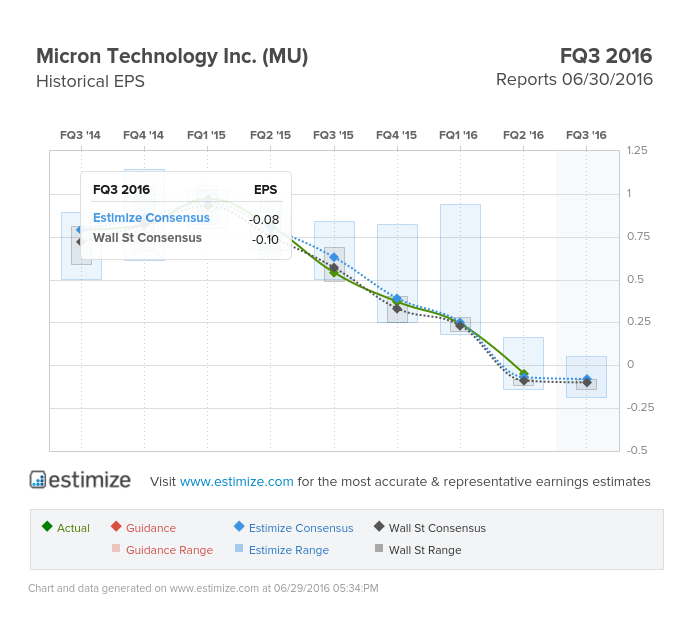 It’s been a rough market for semiconductors over the past year. Micron has managed to miss the Estimize sales consensus in each of the last 6 quarters, and has fallen short of earnings estimates in three of those quarters.

The continual decline of the PC market has unsurprisingly caused Micron’s core DRAM business to collapse. DRAM currently constitutes 70% of its revenue, of which half comes from PC sales. During the second fiscal quarter, DRAM average selling price and sales volume both dropped 10%. This trend is likely to continue during the third quarter.

On the other hand, Micron’s NAND business has been a bright spot. NAND bit shipments are expected to increase 10 to 15% quarter over quarter going forward, thanks to the mainstream adoption of solid state drives (SSD). Still, Micron must remain nimble in its product offerings to compete with tech giants like Samsung, SanDisk and Toshiba, as pricing pressure in SSD still remains a concern. Recent acquisitions of Elpida and Rexchip are expected to help adoption of MU’s memory products.