Is Gilead Sciences, Inc. (GILD) About To Buy Vertex (VRTX) For $45 Billion?

Gilead Sciences, Inc. (NASDAQ:GILD) has been rolling in the money since the release of its hepatitis C drug duo, Sovaldi and Harvoni. Now investors are wondering how Gilead will put its pile of cash to work.

In its Q4 earnings report Gilead announced that its cash position had increased from $2.6 billion to $11.7 billion in one year. On top of quadrupling its bank account, Gilead repurchased $5.3 billion worth of stock throughout 2014.

Gilead’s biggest problem right now is a good one to have. The company is making so money that it needs to find efficient ways to spend its cash. Thus far management has been a stewart of capital, avoiding high risk maneuvers. Gilead’s largest expense in the past year was its share repurchase program. 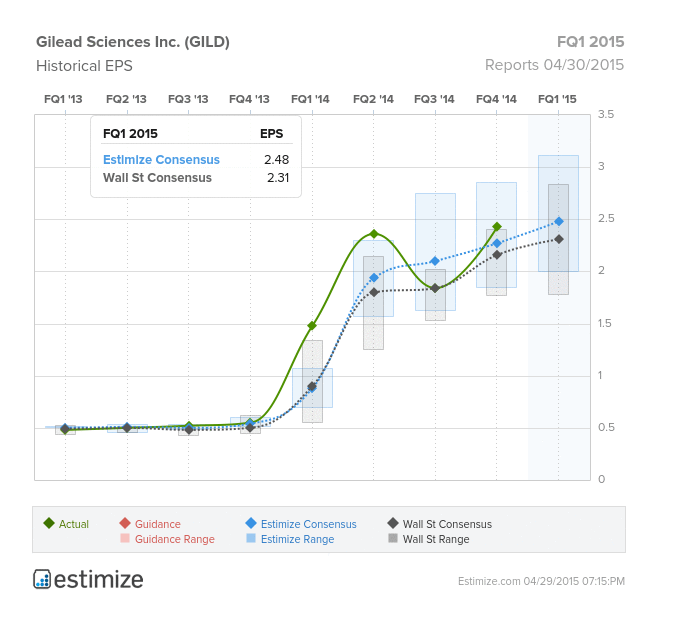 Harvoni was FDA approved in October 2014 and drove a huge earnings beat for Gilead last quarter. This quarter Estimize contributors expect more of the same. The consensus estimate from 140 contributing analysts is that Gilead will report earnings of $2.48 per share on top of $7.04 billion in revenue. Compare that to the estimate from Wall Street, $2.16 in EPS and $6.76 billion in sales.

Since the release of Sovaldi in FQ1 2014 Gilead has trampled the Wall Street earnings consensus 3 times and reported in-line just once. When biotech companies release new drugs, the first 2 quarters after the release often show a great deal of uncertainty. Here the Estimize community is setting the bar high in a show of faith that Gilead will report a strong quarter.

The expectation from Estimize is that Harvoni will drive a 68% year over year increase to earnings and a 41% improvement in revenues. Apart from roaring financial results, investors will look to see if Gilead has figured out a way to spend its mountain of cash, potentially on a blockbuster acquisition.