GoPro Inc (NASDAQ:GPRO)﻿ stock rose from the June 2014 IPO price of $24 to above $96 in October. Since then, the stock has lost more than 50% of its value, currently trading at around $41. But expert trader Andrew Keene of Keene on the Market said Monday that the action camera maker’s stock is bottoming out. Keene relies on both the options market and charts to make his trades.

GoPro seeing some consolidation at $40 level

Andrew Keene said that the stock has begun to “see some consolidation at the $40 level.” A look at the daily chart shows that since its IPO, GoPro has moved up in a series of higher highs and higher lows. Then it hit the all-time high of $96 before going downward. Keene sees a “massive support at the IPO price of around $30.

​Despite GoPro being a high-momentum stock, the prices of its options have declined lately. In fact, GoPro options are at their lowest level since September last year. According to Amanda Diaz of CNBC, Keene is using an options strategy to mitigate his costs. The trader is purchasing January 2016 50/60 call spread for $2.60, and at the same time selling the January 2016 30/20 put spread for the same $2.60.

This trade would return the most profits if GoPro stock hits $60 by January 2016. Keene says it’s a low-cost bet that the San Mateo-based company’s stock would recover all its year-to-date losses. He would lose money if the stock goes below $30, but anything above $50 will be “pure profits.” Andrew Keene’s bullish stance is in line with that of JMP Securities.

Earlier this month, JMP Securities said in a research note that GoPro’s sales are expected to grow 48% in the current quarter and 43% in June quarter. The research firm has an Outperform rating on the stock with $105 price objective. JMP Securities has also bumped up its EPS estimate from $1.45 to $1.50 for the full year 2015. 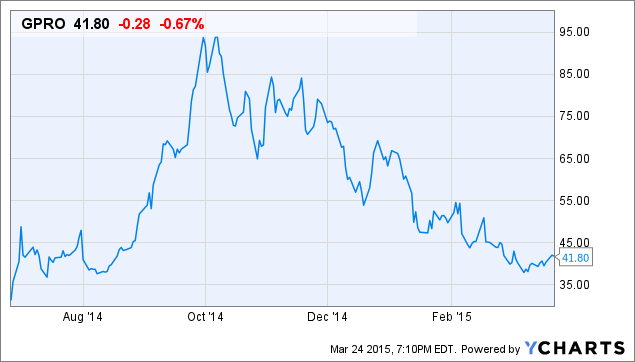