There’s good news all around as Exelixis, Inc. (NASDAQ:EXEL) releases promising data in an attempt to expand the indication of one of its cancer drugs and Mast Therapeutics Inc (NYSEMKT:MSTX) has good news about its lead product candidate. Analysts provide a closer look at each company:

Cowen analyst Eric Schmidt weighed in on Exelixis after the company released positive clinical data. Cabometyx is an FDA-approved drug for specific forms of kidney cancer, or renal cell carcinoma (RCC), but is not indicated for use as a first line of treatment. New data demonstrates that Cabometyx has a statistically significant progress free survival (PFS) benefit compared to Sutent as a first-line treatment, a competing drug from Pfizer, which was approved in 2006.

Schmidt comments that the trial results are “impressive,” and will “foster greater adoption of Cabometyx in its approved indication (2nd-line advanced RCC) as well as possibly in the 1st-line setting.” The analyst explains that Cabometyx is the first drug to “demonstrate a PFS benefit” compared to Sutent in first line RCC treatment.

The analyst explains that Exelixis will not be able to rush into expanding Cabometyx’s indication into first-line treatment for RCC, noting that FDA “will require a confirmatory pivotal trial.” Prior to this trial, “Exelixis had waning interest in pursuing cabo as a single front-line agent in Phase III. This given the changing standard of care in RCC and the company’s interest in combining cabo with IO therapies like nivolumab. The CABOSUN read out may be altering Exelixis’ thinking, and we await additional thoughts from the company on future development.”

In light of this positive news, Schmidt reiterates an Outperform rating on Exelixis though he does not provide a price target.

As of this writing, 3 analysts are currently bullish on EXEL and 1 is neutral. The average 12-month price target is $6.50, marking an 8% potential upside from where shares last closed.

Last week, the company announced positive data from nonclinical studies in testing vepoloxamer on animals with severe heart failure. McCarthy explains, “The data suggest that vepoloxamer may be binding to cardiomyocytes (the ‘beating’ muscle cells of the heart), which are damaged in heart failure, altering and/or normalizing calcium levels and activity, which in turn leads to improvement in heart function.”

While McCarthy waits for the pivotal trial data of vepoloxamer in sickle cell disease, he explains that Mast is continuing “to advance vepoloxamer in heart failure.” He continues, “Mast is advancing a second heart failure program with the Heart Failure Clinical Research Network, evaluating AIR001 (inhaled/nebulized nitrite) in a phase II study (initiating 3Q16).”

McCarthy reiterates a Buy rating on Mast with a $5 price target, marking an overwhelming upside considering the stock last closed at 30 cents. 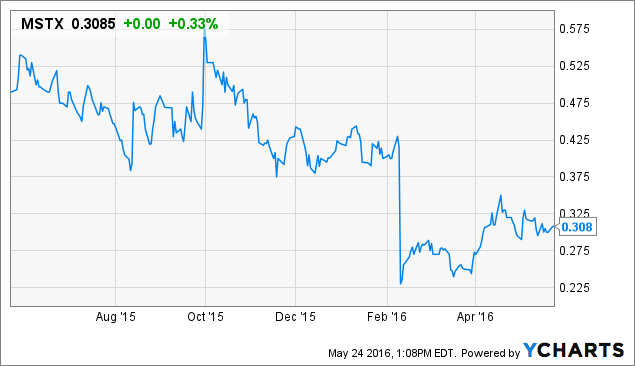