Apple Inc. (AAPL) Will Set Q2 Records Today, But Can They Live Up to Colossal Expectations? Apple Inc. (NASDAQ:AAPL) is more than three quarters of the way to becoming the world’s first $1 trillion company. After knocking it out the park last quarter with record iPhone sales, App store revenue, and Mac sales Apple has reached a market cap of $758 billion.

The company’s stock is scrapping all time highs ahead of its Monday afternoon earnings report and expectations have never been steeper. During the holiday quarter Apple recorded an unprecedented $18 billion in net profit on $57.6 billion in revenue. Analysts don’t expect this quarter to compete with holiday sales, but demands for Apple’s second fiscal quarter have never been higher. 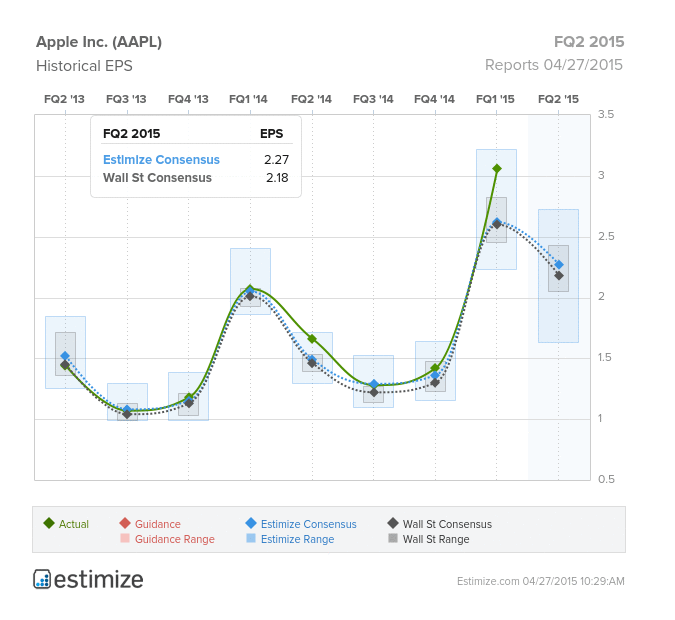 Wall Street is forecasting that Apple will report $2.18 in earnings per share and $56.34 billion in sales. 372 contributors on Estimize have come to a consensus expectation of $2.27 in EPS and $57.36 billion in sales. Last quarter 74.5 million iPhone sales helped Apple increase its earnings and revenue by 48% and 30% respectively on a year over year basis. Even though projections for Apple’s Q2 are at all time highs, they should be within reach. To match the estimates of contributing analysts on Estimize, Apple’s year over year growth rates could relax to 37% for EPS and 26% on sales.

Given how high the expectations are for this quarter Apple stock has predictably made a nice run ahead of its earnings report. But if the world’s most valuable company is going to justify its $758 billion price tag and make a move toward the $1 trillion mark, jumping over the bar won’t be easy.