The biotech-verse is in full upheaval mode as Heat Biologics Inc (NASDAQ:HTBX) shares nosedive following disheartening Phase II results in bladder cancer and as bluebird bio Inc (NASDAQ:BLUE) shares climb in light of a favorable interim Phase 1 data read-out in relapsed/refractory multiple myeloma. Roth Capital is outlining bullish forecasts in face of both the “say it ain’t so” scenario as well as results that certainly “do not disappoint” in the opposite corner. Let’s dive in:

Heat Biologics shares are collapsing 65% after underwhelming investors at the annual meeting of the Society of Urologic Oncology. The firm’s Phase II data read-out from its HS-410 bladder cancer trial failed to impress by coming up short in terms of reaching statistical significance difference at the primary endpoint when juxtaposed against the placebo arm.

Roth Capital analyst Joseph Pantginis reiterates a Buy rating on shares of HTBX while trimming the price target from $2.75 to $2.00, which represents an 80% increase from current levels.

Pantginis believes, “Based on the outcome of the Phase II study, reality or perception is the driver here in that the HS-410 study failed. The potential ‘grey’ area is that: 1) the data would have swung dramatically with only two or three patients, 2) strong immune responses from vaccine are observed, 3) many patients on curves are censored and further follow up could play out positively.”

Looking ahead, there could be a silver lining waiting for the firm, as the analyst explains, “In the meantime, next week’s DURGA readout could provide some potential salvation with topline data (n~9) from the Phase Ib DURGA study combining HS-110 + Opdivo in NSCLC.”

Ultimately, Pantginis maintains strong conviction in the firm’s pipeline despite the setback. “We believe that Heat’s core programs, focused on early stage disease, or in combination with checkpoint modulators, could revive the cancer vaccine space. However, clinical data catalysts remain a key requirement,” the analyst contends.

According to TipRanks, which measures analysts’ and bloggers’ success rate based on how their calls perform, analyst Joseph Pantginis is ranked #4,152 out of 4,243 analysts. Pantginis has a 34% success rate and faces a loss of 12.5% in his annual returns. However, when recommending HTBX, Pantginis garners 243.5% in average profits on the stock.

Additionally, Kumaraguru Raja of Noble Financial rates a Buy on HTBX with a $2.00 price target and Mara Goldstein of Cantor rates a Buy rating without listing a price target. 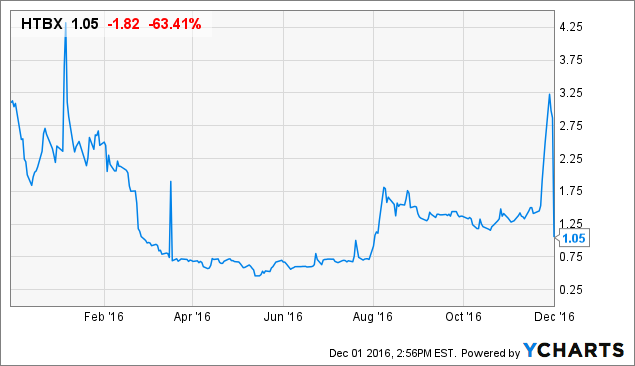 bluebird bio shares are on a close to 17% ascent and Roth Capital analyst Mark Breidenbach finds himself cheering right along with investors amid the 28th EORTC-NCI-AACR Symposium today, where the firm will be presenting its interim results from the Phase 1 study of bb2121, the company’s lead CAR-T cell therapy for multiple myeloma (MM).

Breidenbach asserts, “Bluebird announced that multiple stringent complete remissions (sCR) were achieved in the initial cohorts, coupled with the best safety profile we have seen for a BCMA CART therapy. Although early, we believe the results strongly support continued development of bb2121 as a treatment for patients with late stage MM.”

Moreover, the analyst opines, “As the company continues to evaluate bb2121, we believe investors should focus on durability of responses. Based on prior experience with BCMA-targeted CAR-T therapies, we believe durable responses are achievable; for example, in the NCI-sponsored study, PFS in the three responding patients ranged from two to seven months.”

From the analyst’s perspective, these interim results give rise to confidence. “While bb2121 is still an early stage program, we feel the first-in-human data support continued development and underscore the strength and depth of bluebird’s pipeline,” Breidenbach surmises.

Therefore, the analyst reiterates a Buy rating on BLUE with an $87 price target, which represents an almost 23% increase from where the shares last closed.

As usual, we recommend taking analyst notes with a grain of salt. According to TipRanks, analyst Mark Breidenbach is ranked #4,083 out of 4,243 analysts. Breidenbach has a 31% success rate and forfeits 18.0% in his yearly returns. When suggesting BLUE, Breidenbach loses 17.6% in average profits on the stock.

TipRanks analytics indicate BLUE as a Strong Buy. Out of 14 analysts polled in the last 3 months by TipRanks, 12 are bullish on bluebird stock, 1 remains sidelined, and 1 is bearish on the stock. With a return potential of 31%, the stock’s consensus target price stands at $93.00.