Pyxis Tankers stock reached the $9 level for the first time ever, sending Maxim's James Jang to the exit.

The upside for Pyxis Tankers Inc (NASDAQ:PXS) stock is now behind it after its recent big run, according to Maxim Group analyst James Jang. The analyst on Monday lowered his rating for Pyxis shares to Hold from Buy, citing valuation. The analyst kept his 12-month price target for the product tanker company at $3.00, which implies nearly 70% downside from current levels.

Pyxis Tankers’ shares are up nearly 360% since Friday, leaving Jang scratching his head while trying to think of a reason. However, the analyst noted that he was unable to substantiate any fundamental reasons for the price move based on his sources and channel checks.

Jang pointed out that there was news last week within the product tanker sector, most notably Greenbriar’s exit from its Ardmore Shipping investment, and Scorpio Tankers’ $90 million share offering. While these two events are not related to Pyxis, the analyst believes the news could have sparked interest in the product tanker sector and contributed to the unusual volume and sharp price movement on PXS shares.

According to TipRanks.com, which measures analysts’ and bloggers’ success rate based on how their calls perform, analyst James Jang has a yearly average return of 15.8% and a 48% success rate. Jang has a 135.7% average return when recommending PXS, and is ranked #764 out of 4739 analysts.

Overall, out of the 2 analysts polled in the past 12 months, 1 rates Pyxis Tankers stock a Buy, while 1 rates the stock a Hold. With a downside potential of 64%, the stock’s consensus target price stands at $3.25. 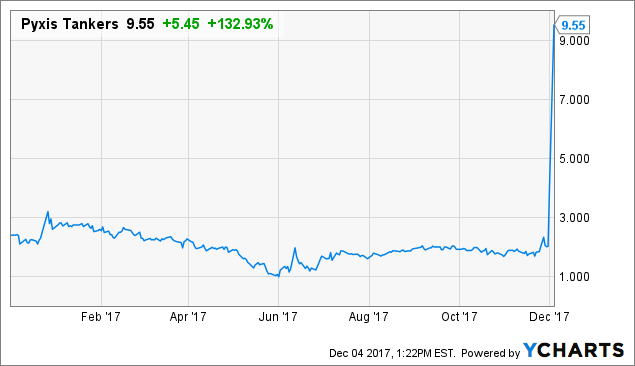 Dermira Inc (DERM): This Analyst Says Don’t Expect the Stock to Work in 2018