Zack’s Bear Of The Day: Exxon

Exxon Mobil (NYSE:XOM) probably has the best chance of not just emerging from the downturn in oil victoriously, but also come out bigger and stronger than ever before. It’s not one of those fly-by-night E&Ps that may or may not make it out alive. We’re talking about one of the largest, most profitable corporations in the world. But then why am I naming them my Bear of the Day?

The simple answer is that these big oil companies may be sucking all of us into a value trap. As prices start to come down for stocks like Exxon, Chevron (NYSE:CVX), and BP (NYSE:BP) we may be tempted to scoop them up in the hopes that we’re getting them at a bargain. But perhaps the bargain is just beginning. Maybe we’re only in the 5th innings of a longer downturn in oil. Basically, I’m not sure that the timing is just right.

First, the obvious thing to talk about is crude oil. The technical breakdown in crude is mind blowing. Every potential area of support along the way has been smashed. Now we’re stuck looking at multi-year lows in the hopes of finding something that resembles support. This last push below $50 to kick off the year was a reverse-spinning heel kick to the face. It shattered the market and now you’re looking at Great Recession lows as the next leg down in the market. 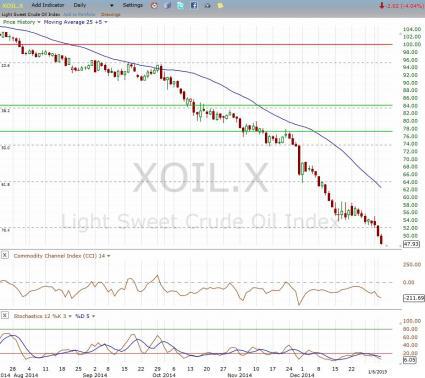 As a result, you’re going to have pressure on Exxon’s bottom line. Analysts have taken note and are ahead of the curve. If you take a look at the Zacks Consensus Estimates for the current quarter and next year, you can easily see the negative trend on Wall Street. Eight analysts have dropped their current quarter forecasts, pushing the consensus down from $1.76 to $1.38. Next year’s change is even more drastic. Eleven analysts have revised to the downside helping drop consensus from $7.51 all the way down to $5.60.

A quick look at the stock chart and you can see where this value trap has been setting you up for the last several months. Investors looking for XOM to hold the century market in August were disappointed as XOM came down to the high $80s by mid-October. After rebounding to take another stab at $100, the rally fell short and XOM topped out on November 21st at $97.20. Another leg lower began and saw fresh lows on December 16th at $86.19. The last failed rally saw the stock stop short just above $95. Recently the stock has sold back off below $90 and still remains under pressure. 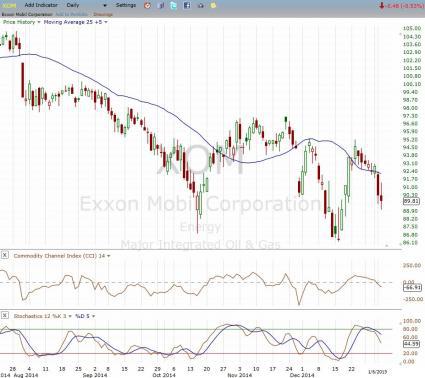 You have a stochastic sell signal that took place the day after Christmas. Couple that with the fact that the stock has dipped back below a negatively sloped 25×5 yet again and you have a recipe for disaster. If XOM fails to hold the December low, you’ll have another value trade successfully trapped and stopped out