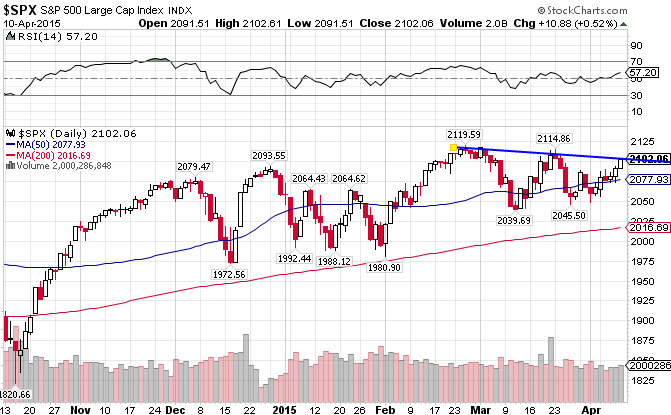 The EMU Index ((EZU)), or the European Economic and Monetary Union, may have finally broken through an ugly downtrend line that its been mired in for some time. The news out of Europe is improving slightly and the market has responded as a result, forming a short-term uptrend line and getting above both moving averages while also forming the coveted golden cross (where the 50-day intersects the 200-day on its way up). Bullish chart. The index is up 8.75% for all of 2015. The Russian Index ((RSX)) had been hit pretty hard by the US-EU-imposed sanctions, but after a bounce above the 50-day MA following the dramatic sell-off, the index looks like it may form an new uptrend line. It must first hold the 18 level and then make its way above the 200-day MA if it wants to stay on track. The market is extremely cheap. If only Putin could stop from continuing to provoke and antagonize the West, this could have room to run. RSX is up a healthy 28.57% in 2015 after a harsh 2014 where it saw a 50% decline. A stronger US dollar and crashing crude oil prices finally took its toll on the Middle East Index((GULF)). The index broke below both MAs as crude prices have fallen over 40% in the last few months. It had recovered some in the last couple of months as the price of crude has stabilized and recent victories against the Islamic State, but a leg lower could be in order. The index is up slightly at 1.21% since the beginning of the year. The Latin American market ((ILF)) broke down in September in emphatic fashion. It broke through both the 50-day and the 200-day moving averages on its way to a 15% loss in a little over a month. It was moved concurrently with the crashing commodities market and is still struggling to hold any support. Just like with most international markets, the Latin American Index has suffered greatly with the rise in the US Dollar. The index has recorded an 1.67% loss this year. Africa’s market ((AFK)) has managed to grind higher for most of 2014. But the deadly Ebola outbreak and continued upheaval in Northern Africa, coupled with a weak global economy, has finally dampened Africa’s run. It is up 0.66% for 2015. The Chinese, Indian and Southeast Asian markets have broken out within the past month. Led by a surge in the Chinese markets, the index now finds itself above both moving averages after a stunning week. We could be in for another move higher if the index holds the 46 level. The Pacific x-Japan index ((EPP)) is up 8.10% in 2015. Japan ((EWJ)) is holding onto gains made in February and March after the BOJ unexpectedly eased monetary policy in the beginning of the year. Japan is up 15.12% YTD, the second best performing market.