Will China Reveal Its Gold Holding?

EconMatters- May 6, 2015, 7:53 AM EDT
SHARE ON:
Usually any news surrounding the International Monetary Fund (IMF) elicits yawns in the financial markets. 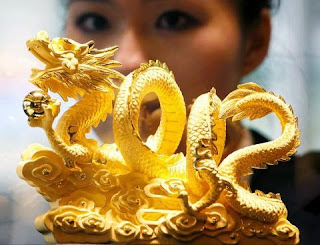 But soon the IMF will announce some news that’ll have investors biting their nails.
You see, China is in the process of negotiating with the IMF to have its currency – known as the yuan or renminbi – become part of the IMF’s monetary reserve denominator, the Special Drawing Rights (SDRs).
Since SDRs aren’t really a currency, the change would be largely a symbolic move. But one of vast importance to the Chinese.
If China is accepted by the IMF, it would become the first emerging market country to join this elite club, along with the likes of the U.S. dollar, British pound, Japanese yen, and euro.
But the story gets more interesting…
In order to join the club, China must reveal to the world one very important piece of information that investors have been wondering about for years.
How much gold does China actually hold as part of its reserves?

How Many Jellybeans in the Jar?

It’s truly one of the greatest mysteries of the investing world.
China hasn’t released a gold number since April 2009, when it said it owned 1,054 metric tons (mt) of the precious metal.
Since then, speculation has been rampant on exactly how much gold China now owns. Guesses have ranged as high as 8,000 mt to 10,000 mt.
Bloomberg Intelligence has made a very reasoned guesstimate, predicting that China’s gold reserves may have tripled since 2009 to roughly 3,500 mt. Bloomberg arrived at this figure based on trade data, domestic gold output (China is the world’s biggest producer), and numbers from the China Gold Association.
If Bloomberg is correct, that would make China’s gold hoard the second largest, behind only the United States. That is, of course, if the United States still has gold…
Many gold enthusiasts believe the gold that once backed our currency to be long gone. The gold, held by the Federal Reserve, hasn’t been fully audited since 1953.

It does make sense for China to add to its gold reserves. After all, it’s trying to internationalize its currency.
Bart Melek of TD Securities told Bloomberg, “If you want to set yourself up as a reserve currency, you may want to have assets on your balance sheet other than other fiat currencies.”
Also, at a time when most central banks are printing currency like mad, China would like the world to see the renminbi as a stable currency, which means it’s backed by lots of gold.
This will be especially useful if, as some speculate, China will unpeg its currency from the U.S. dollar.
You see, China currently has its currency tied directly to the U.S. dollar in a 2%-wide trading band of between 6.12 renminbi to 6.27 renminbi to the U.S. dollar. But, that’ll change if China unpegs and the renminbi becomes a free-floating currency like the other members of the IMF’s SDR.
If China’s currency is freed, it’ll no longer be tied to the whims of Federal Reserve policy. As it stands now, every time the U.S. dollar moves, so does the renminbi. That makes no sense for an economy at a totally different level of development, hence the reason China wants its currency to be independent.
Also, one of China’s goals is to have all of its trade (exports and imports) settled in renminbi. It’s already surpassed the euro to become the second-most-used currency in international trade. And unpegging the renminbi’s value from the U.S. dollar will only help with this.
Plus, it makes little sense for the IMF to add a currency to its makeup of SDRs that’s directly tied to an already-included currency –the U.S. dollar.

So when will these moves from China happen?
The first IMF meeting discussing revisions to the SDR will be informal and take place in mid-May. But, the real fireworks should happen before the second meeting in October.
Before that second meeting, if all goes according to plan, China will reveal its gold holdings.
And, if it turns out that the country’s gold holdings have doubled or tripled, that’ll give a boost to the gold price.
This will no doubt please gold holders, which have seen the precious metal fall from its peak of $1,921 an ounce in 2011 to the current level of around $1,200 an ounce.
The combination of having an accurate number for gold reserves and the possible unpegging from the U.S. dollar could add up to a long-awaited and sustained rally in the gold price.
Research Report
analyst ratings
blogger opinions
investor sentiment
news sentiment
analyst ratings
insider activity
hedge funds
stats charts
You May Also Like