Will Berkshire Hathaway Inc. (BRK.A) Ever Pay a Dividend?

Berkshire Hathaway Inc. (NYSE:BRK.A) is one of the great American success stories.

The company’s humble beginnings can be traced back to an ailing New England textile business in the 1960s. Warren Buffett began purchasing shares and eventually instituted himself as Chairman and CEO.

Today, Berkshire is a diversified conglomerate with substantial operations in the following industries:

Along with many other holdings.

For investors, Berkshire has many of the characteristics of a great investment – a wide economic moat, a strong track record, and some of the most shareholder-friendly management in the business.

There’s just one problem – the company doesn’t pay a dividend. Berkshire Hathaway is the furthest thing from a Dividend Aristocrat, and management isn’t shy about rubbing this in.

“The question is about evaluating Berkshire when it doesn’t pay any dividends. And it won’t pay dividends, either. That’s a promise I can keep. All you get with Berkshire stock is that you can stick it in your safe deposit box, and every year you take it out and fondle it.”
– Warren Buffett

However, the winds of change are blowing at Berkshire. The company is larger than ever before, and inevitable management changes have driven many investors to wonder if the company’s dividend policy is about to change.

This article will discuss the possibility of Berkshire Hathaway paying a dividend, in detail.

Before explaining why Berkshire’s dividend policy may change in the future, it is useful to understand why the company currently pays no dividend.

One of the biggest reasons is the company’s current leadership. Warren Buffett is arguably to most adept capital allocator of all time.

This means that every dollar of dividend payments received by shareholders is one less dollar of capital managed by Buffett. Unless you believe as an investor that you can outperform Warren Buffett, dividends are detrimental to your total returns are a shareholder of Berkshire Hathaway.

Buffett understands this, and he is against dividend payments as a result. For instance, when asked about Berkshire’s single historical dividend payment (which occurered in 1967), Buffett joked that he “must have been in the bathroom” when the decision was made.

However, Buffett is old – currently 86 years old. He will eventually be replaced as CEO of Berkshire.

The company has publicly stated that Buffett’s role will be split up upon his departure. The management of Berkshire’s investment portfolio will be entrusted to one person (or more likely, a group of individuals), while the CEO roles will be assumed by another.

In the past, Lou Simpson (GEICO’s investment manager) would assume investment management responsibilities while Charlie Munger would take the executive role. This no longer makes since, as Simpson is retired and Munger is ever older than Buffett.

The company has also internally identified a successor to Buffett’s executive role. Some investors have questioned whether this candidate will change Berkshire’s dividend policy.

I think that is will take much more than a simple change in management to instigate a dividend at Berkshire Hathaway. However, we will see that there are other driving forces behind potential dividend payments at this company.

Another factor that has led investor to question the possibility of dividends is the tremendous amount of cash and equivalents on Berkshire’s balance sheet.

Because of Berkshire’s strong operating performance, the company is sitting on more cash than perhaps ever before. This is illustrated in the following diagram. 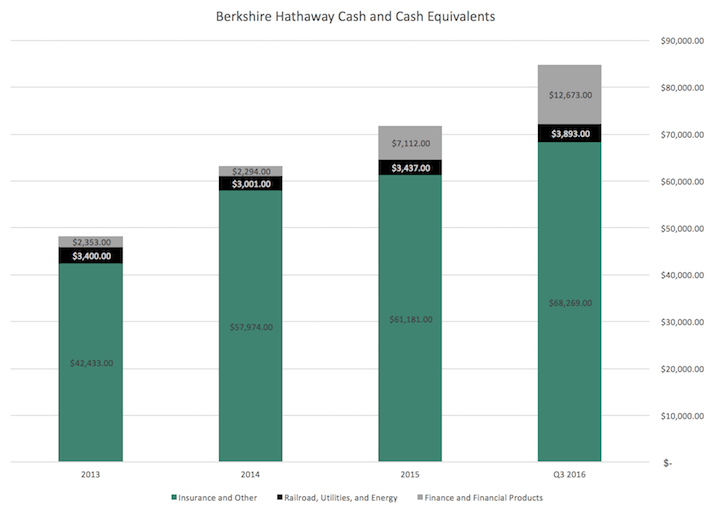 Right now, Berkshire’s cash hoard is in excess of $80 billion. Buffett prefers to keep about $20 billion of cash on hand in case some serious insurance claim needs to be paid, which gives $60 billion of cash available for acquisitions or internal investment.

While this number is substantial on an absolute basis, some have argued that the company’s cash position will naturally grow as the company does, which implies that Berkshires $80 billion cash ‘hoard’ is not as large as it seems relative to the growth of the company.

To account for that, the following diagram displays Berkshire’s cash hoard as a percent of their total assets. 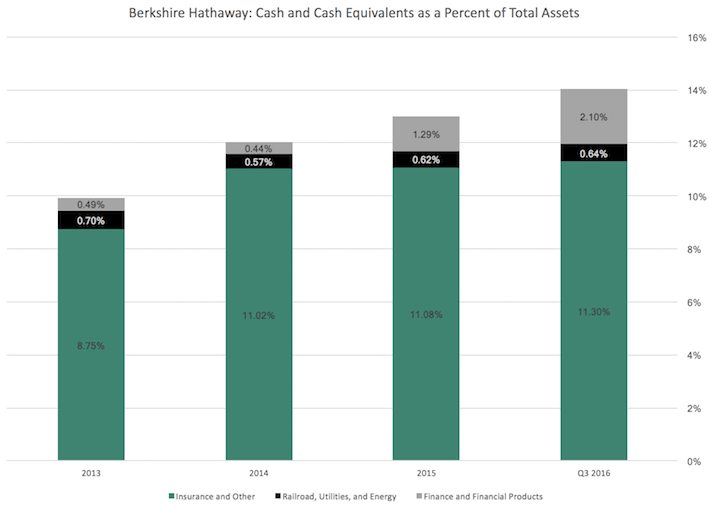 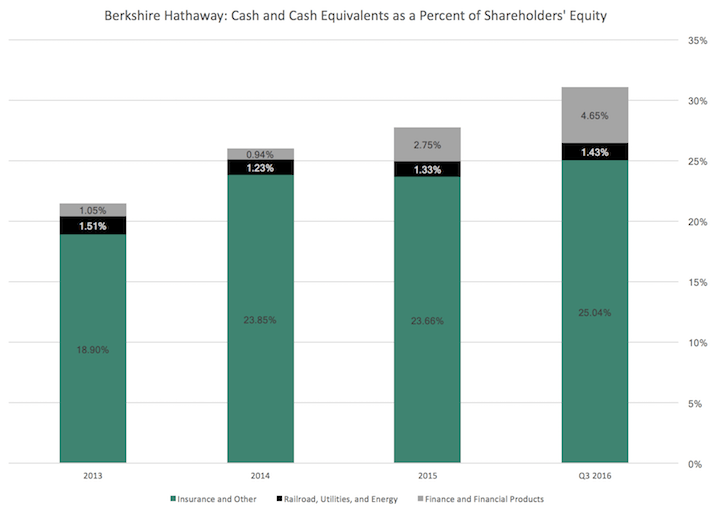 Clearly, Berkshire’s current cash hoard is excessive even when adjusting for the growth in the company’s balance sheet.

Dividend payments would certainly help to reduce these numbers, allowing Berkshire’s investors to deploy this capital at a higher return than the money market rates that Berkshire is earning on its cash and equivalents.

However, I’m still not convinced that this is enough for Berkshire to initiate dividend payments. After all, the company has been adept at deploying capital in the past, so who’s to say they aren’t waiting for the next big acquisition opportunity?

The next section discusses why this is difficult for today’s Berkshire Hathaway.

Berkshire is so huge today that it has become difficult for the company to identify acquisition opportunities large enough to move the needle on their cash pile.

The conglomerate has a current market capitalization of ~$406 billion. We’ve also seen that they have $80 billion of cash and cash equivalents on their balance sheet.

To deploy any meaningful proportion of Berkshire’s capital, the company’s management will have to target very, very large acquisitions.

To get a sense of just how large Berkshire’s capital reserves are, the company could theoretically purchase all the outstanding shares of the following Dividend Aristocrats without issuing a penny of debt:

Granted, the actual price to acquire these companies would be larger due to the transaction premium that comes with purchasing entire companies vs. fractional ownership, but the bottom line remains the same:

Berkshire’s cash position is substantial and cannot be meaningfully reduced with tiny acquisitions.

This has manifested itself in the company’s recent M&A activity.

It was the largest acquisition in Berkshire’s history.

Eight years before that, Berkshire purchase Burlington Northern Sante Fe, which is the second largest freight railroad in North America.

Taking a broader view, four of Berkshire’s five largest acquisitions occurred since the 2008-2009 financial crisis. The only exception is their $16 billion acquisition of Gen Re, a reinsurance company, in 1998. 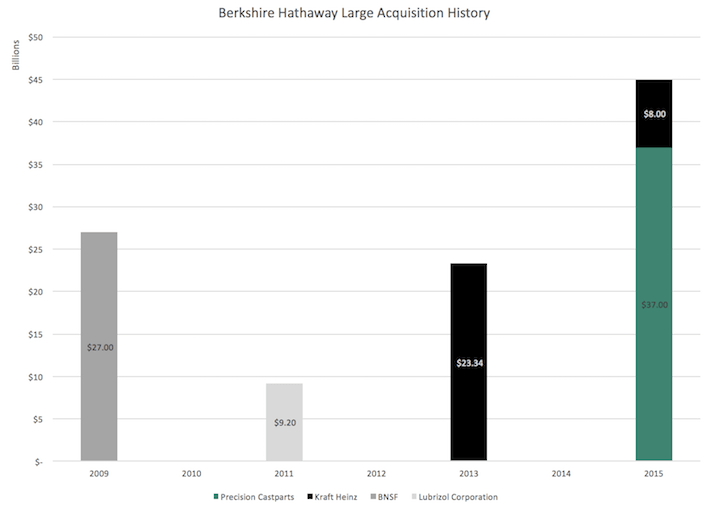 Source: Fox Business; note that Kraft Heinz experienced a second capital injection for the merger of Heinz Foods and Kraft Foods in 2015.

As Berkshire grows and such acquisitions become necessarily larger, it becomes more and more likely that the company will begin paying a dividend.

Berkshire Hathaway appears more likely to pay a dividend when Warren Buffett retires than at any other time in their corporate history.

Combining Buffett’s retirement with the company’s growing size and even-faster-growing cash pile, and it might seem like dividends are all but a sure thing for the Berkshire Hathaway investors of the future.

However, I’m still skeptical that Berkshire Hathaway will begin paying a dividend in the post-Buffet Era.

The Oracle of Omaha has spent half a century building today’s Berkshire, and I don’t think the company’s dividend policy will suddenly change just because of a change in management.

The company will still have outstanding investment managers. Further, although they haven’t identified any attractive acquisition targets lately, Berkshire has shown the desire and ability to make substantial acquisitions when the right opportunities come along.

For these reasons, I’m doubtful Berkshire will initiate a dividend in the foreseeable future.