By Michael Lebowitz at 720 Global

“The kid had a 94-mile-per-hour fastball, a clean delivery, and a body that looked as if it had been created to wear a baseball uniform. He was, in short, precisely the kind of pitcher Billy thought he had trained his scouting department to avoid.” – Michael Lewis, Moneyball 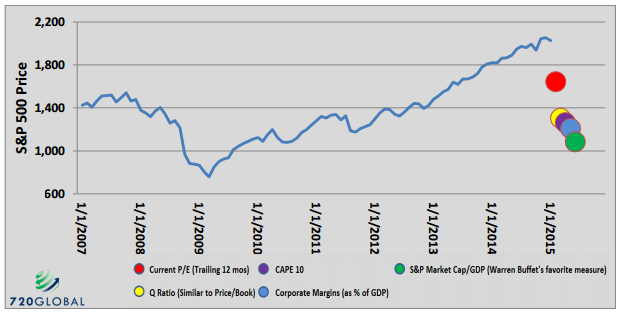 In his book Moneyball: The Art of Winning an Unfair Game

, Michael Lewis explores the irrationality and ignorance of human behavior and the opportunities it creates for those willing to resist it. The book represents a value investors guide to how the Oakland A’s, with one of the smallest budgets in Major League Baseball, consistently found and acquired quality players that were shunned under the traditional scouting matrix. These overlooked and undervalued players afforded the Oakland A’s and General Manager Billy Beane the fifth best winning percentage with the fourth lowest total payroll over the last 15 years.

As the graph below from FiveThirtyEight shows, Beane dramatically outperformed his opponents when it came to maximizing the value of his budget. Once when asked why he was willing to allow Michael Lewis to write a book about his approach, Beane responded “It won’t matter who reads it, no one would have the courage to put into practice what we do.” This same model of logic and courage should be applied in investing. 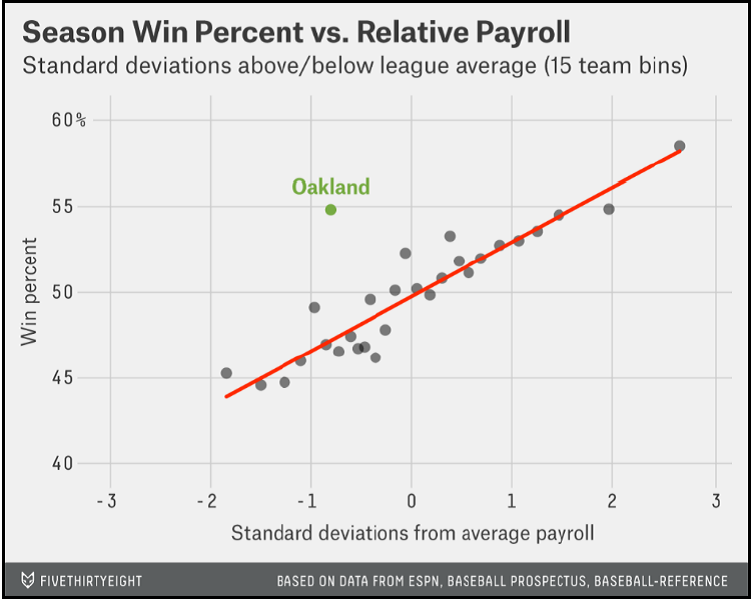 In today’s euphoric markets we also believe it takes a lot of courage for those willing to underweight, sell or avoid U.S. stocks. Arguably, even more courage is required now than was required to buy stocks in March of 2009 when fear was running rampant and the stock markets were plummeting to levels last seen in the 1990’s. We realize that is a strong statement given how at ease investors are today compared to how scared they were in 2009. When one has enjoyed the benefits of a persistently rising market that has lasted many years, muscle memory makes changing a well-rewarded posture extremely difficult. This is especially true when the alternative, moving to cash, produces zero return. Conceptually, investing is a very simple task; buy when an asset is cheap and sell the asset when it is rich. Investors are psychological beings, however, and thus are subjected to more filters than a binary decision on whether an asset is a good buy or sell.

Cognitive dissonance is on full display today in the financial markets. The U.S. economy has been supported for seven years by a zero interest rate policy, record fiscal deficits and unprecedented surges in the money supply. Despite all of the stimuli, the economy is slogging along well below trend. The actions taken by the Federal Reserve, federal government and governments around the world are unprecedented. In a normally functioning economy such actions would generate massive growth and inflation. Since growth has been tepid and inflation benign, there is obviously something amiss.

Corporate earnings and thus stock prices are driven by the economy. Despite the state of the economy and economic concerns we harbor, investors are investing hand over fist in assets whose valuations are predicated on strong economic growth in the future. As a result, most major U.S. stock indices are currently at or near all-time highs. A sizeable percentage of the gains are a result of an expansion in the price/earnings multiple. In other words investors are willing to pay more today, than they did yesterday, for the same amount of historic earnings and or forecasted earnings. The graph below shows five popular gauges of valuation, including those used by the Federal Reserve and investing icon Warren Buffett.

The colored circles show where the S&P 500 would be if investors valued earnings today as they did historically. Based on these five measures the S&P 500 is adding a 20% to 50% premium over what decades of history suggests is fair. These readings range from the 80th percentile to the 100th percentile in each case. Not unlike the rhetoric of the late 1990’s or mid-2000’s, there is no shortage of rationalizations for why such extraordinary valuations are reasonable and justifiable. Yet the fact remains firmly in place, stocks are expensive.