Why 2 of the U.S. Dollar’s Recent Bottoms Have 1 Thing In Common

Imagine you’re on an airplane, mid-air, when the intercom from the cockpit accidentally turns on. You and the entire cabin crew overhear the pilot say this to his copilot:

“I know we’re heading northeast at 430 mph. But… I have no idea when or where I’m supposed to land.”

That’s when you cough up your bag of peanuts!
Dramatic? Sure. Imaginary? Yes. But it also highlights the real limits of mainstream financial analysis, which has no trouble identifying the current trend in a financial market — but has little idea as to when or where that trend will end.
This is where the Wave Principle really can help you. Elliott wave analysis recognizes about a dozen distinct price patterns in financial markets. Each pattern conforms to clear, objective rules and guidelines that help you — the investor or trader — determine,

One Elliott wave pattern above all else signals the trend will soon end: the aptly named, Ending Diagonal. It only forms in the final position of a wave sequence — i.e., wave 5 of a 5-wave impulse, or wave C of a correction, just as the trend is about to turn.
Most importantly, when this pattern ends, it’s followed by a swift and powerful reversal that retraces the entire length of the diagonal. Here’s an idealized depiction, in bull and bear markets: To fully appreciate the wonder of ending diagonals you have to see them in a real-world market — like the U.S. dollar, where this pattern precipitated not one, but two of the most dramatic turning points in the buck’s recent history.
First, 2009, the year the music of the world’s main monetary unit was supposed to die:

Lo and behold, all the mainstream “pilots” could see was the dollar’s descent continuing into total oblivion:

“Dollar Slump Persisting As Top Analysts See No Bottom… As long as the Fed maintains interest rates at historical lows, the EUR-USD should return on a bullish trend.” (Nov. 23, 2009 Reuters)

Of course, you know that the Fed has kept interest rates at the same low levels, near zero, since 2009, for 6 long years — yet EURUSD did the opposite of what the mainstream pundits expected.
On the other hand, thanks to the ending diagonal Elliott wave pattern, you knew of the coming bullish reversal in the dollar/ bearish reversal in the EURUSD ahead of time. Elliott Wave International’s October 21, 2009 Short Term Update wrote:

“The [U.S. Dollar Index] still has not ‘spiked beneath 74.92, the lower trendline of the fifth-wave ending diagonal that we’ve been discussing. Absent this price behavior, a rally above 77.48 would be another signal that a significant low is in place. Until then, we patiently wait for the current wave structure to complete.” 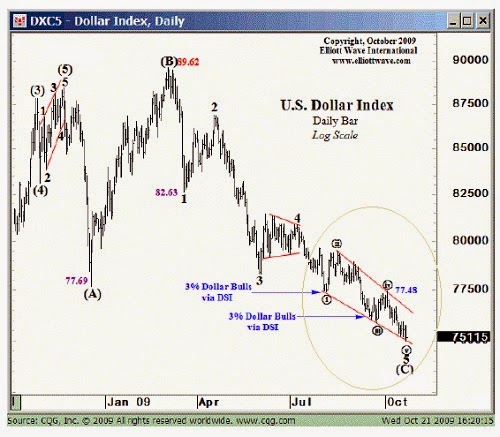 “The dollar sentiment remains bleak as night… and the wave count once again appears terminal. The coming advance in the dollar should be exceptionally powerful.” Result: As the ending diagonal pattern suggested, soon after the U.S. dollar index took off in a powerful rally to a one-year high against the euro.
Now, flash ahead to May 2014: Once again, U.S. dollar “doom talk” is back. Against the euro, the dollar stands at a 2.5 year low, near $1.40.
This time, Elliott Wave International’s June 2014 European Financial Forecast saw a bearish ending diagonal on the EURUSD price chart, suggesting another greenback comeback ahead:

“The wave labels on the chart denote the pertinent legs of the rally…Wave C of (4) traced out an ending diagonal to complete the advance. Last month, prices broke below the diagonals lower boundary, confirming the end of the large degree rally. The decline should be the first of many down waves that carry the euro lower over the remainder of 2014.” This is why ending diagonals are one of the most high-confidence Elliott wave patterns. But it’s just one of many. Imagine how much knowing other patterns could help you with your markets.