When Market Liquidity Takes a Holiday

EconMatters- May 22, 2015, 6:50 AM EDT
SHARE ON:
By José Viñals
Financial market liquidity can be fleeting. The ability to trade in assets of any size, at any time and to find a ready buyer is not a given.  As discussed in some detail last fall in this blog, a number of factors, including the evolving structure of financial markets and some regulations appear to have pushed liquidity into a new realm: markets look susceptible to episodes of high price volatility where liquidity suddenly vanishes.
In our April 2015 Global Financial Stability Report we identify a new aspect to the problem:  asset price correlations have risen sharply in the last five years across all major asset classes (see figure). 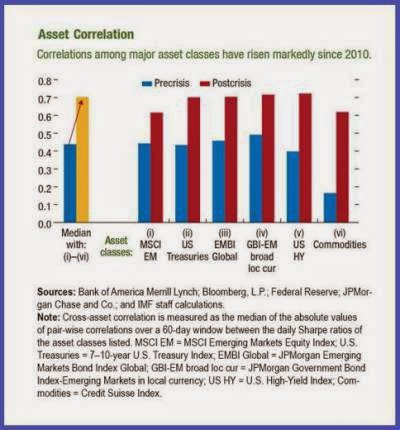 This increase has been associated with episodes of decreased market liquidity. We also show that asset price correlations edge higher as volatility in financial markets increases, virtually across all major asset classes.  This increase in correlations’ spillovers is a characteristic of financial contagion.
Chances that something goes wrong are higher
We’ve had a few foretastes of the possibility of markets becoming illiquid: the October 15, 2014 flash rally which recorded one of the largest falls and then rise over the last quarter century in the most liquid market in the world, U.S. Treasury bonds; and the dislocation in foreign exchange markets following the Swiss central bank’s unexpected decision to end its policy curbing the value of its currency.
This risk of illiquidity is even more significant in many advanced economy corporate bond markets, as well as in bond markets in emerging economies that are experiencing large inflows from investment funds.
Fortunately, such liquidity crunch episodes have so far not exerted long-lasting adverse impact. But the evaporation of market liquidity today could result in more market stress with potentially adverse knock-on impact on the global economy and financial stability.
In this context, the risk that shocks could trigger a rapid erosion of liquidity in typically well-functioning markets has increased due to two factors.
Geo-politics and the oil price decline set the stage. The very steep and rapid decrease in oil prices in the second half of 2014 put considerable strain on U.S. high yield corporate bonds markets—where energy companies account for 15 percent of the market— and on oil exporting emerging economy government bond markets.  Even when oil prices have partly recovered from last year’s sharp decline, the volatility of oil prices remains high, indicating ongoing concerns of market participants about future oil prices.
Different monetary policies and a stronger dollar may provide a test of market resilience. Notwithstanding uncertainties regarding timing and pace, the United States looks set to begin tightening interest rates later this year, having already ended asset purchases last year. This is in marked contrast to the Euro Area and Japan, where policymakers are expected to continue very accommodative monetary policies in the near term. This has set the stage for the appreciation of the U.S. dollar. Stronger growth in the United States, the ultimate driver, is good news for the global economy, but the interest rate rise and prospect of further dollar appreciation could result in capital outflows from emerging economies and from high yield corporate bond markets back into U.S. Treasuries. This could test market liquidity in high yield and emerging economy bond markets and adversely affect financial stability.
Policies to enhance market liquidity
First, we need policies to strengthen market structures, even in government bond markets. Regulators should enact policies to encourage market participants to provide liquidity in normal trading conditions. This could include rewarding primary dealers with incentives or obligating them to trade passively (by providing quotes) or actively (by actual transactions). These measures need not require market makers to maintain a constant presence during unusual bouts of extreme volatility. Instead, regulators can design circuit-breakers that are triggered during these rare events, halting disorderly trading conditions and allowing time for liquidity to replenish. In fact, by buttressing participation in secondary markets in normal conditions, authorities may forestall the very deterioration of trading liquidity that could require the use of these circuit-breakers.
Second, regulators and central banks should take urgent steps to ensure continued market liquidity, not just in good times but also under conditions of stress. At the national level, this includes enhanced micro- and macroprudential frameworks to enhance oversight of liquidity within mutual funds and also at the level of financial markets. This requires effective tools such as ensuring that redemption terms in the asset management sector are better aligned with underlying market liquidity conditions. National supervisors should coordinate and provide consistent guidance to trading firms across major jurisdictions regarding the appropriate risk limits on individual retail investors, exchanges and clearing firms.
Third, regulators and central banks ought to examine and exploit cross-border synergies in policies, including the preemptive creation of central bank swap lines that were so vital during the last crisis. Regulators and monetary authorities should also take into account the dynamics posed by increased global asset correlations and periods of volatility when evaluating systemic risks in financial markets.
The author would like to thank Vlad Pillonca, David Jones, and Fabio Cortes, authors of the liquidity section of Chapter 1 of the April 2015 Global Financial Stability Report, for their contributions to this blog.
Research Report
analyst ratings
blogger opinions
investor sentiment
news sentiment
analyst ratings
insider activity
hedge funds
stats charts
You May Also Like