In today’s global monetary system, money is created out of thin air — like magic — but it can disappear even faster.

Almost all of the money in our system is created by banks. They are able to issue loans against just 10% of their deposits as reserves for losses…
But the truth is those are not their deposits, they’re ours. They are creating loans for us… against our own deposits.
How backwards is that!?
The Federal Open Market Committee (FOMC) can change the banks’ reserve requirements, allowing them to issue more loans. And even the Fed can loan money to banks for short periods of time.
But it’s all a sleight of hand. Everything runs on credit. We create something from nothing.
The money doesn’t really exist.
This is what our monetary system is built on… but when banks stopped lending after the financial crisis, this system of credit started to fail. Money stopped happening.
That’s when the Fed stepped in…
If the banks weren’t going to make the loans to expand the money supply, the Fed would simply inject new money into the system to make it up.
Ordinarily, QE is supposed to provide liquidity short term only in case of emergencies, like the meltdown of 2008 and World War II.
But in today’s something-for-nothing economy, it’s one big magic show — now you see it, now you don’t. Keep the bubble going, or the financial and banking system will melt down like in the early 1930s.
Think back to last week when I talked about how the Fed created the greatest depression in modern history by constantly stimulating the economy with lower interest rates.
Such excessive lending and spending always happens in the fall bubble boom season of our long-term economic cycle. But central banks only tend to exacerbate those bubbles by setting interest rates lower to keep the party going.
That only ends one way…
David Stockman (who will speak at our 2015 Irrational Economic Summit in September) recently commented on this. Prior to the Great Depression, the money created by rapidly expanding bank loans and low interest rate policies… simply vanished, between 1929 and 1933 when the depression kicked off.
Commercial bank loans fell from $36 billion to $16 billion.
Bank accounts fell from $25 billion to $17 billion.
And stocks and financial assets fell over $10 billion.
What the hell happened?
It’s not rocket science. Artificially created money only creates bubbles that inevitably burst, and then the money disappears… it’s that simple. Less money in the system creates deflation.
But back then government debt was low. For the U.S., it was only 18% of GDP.
QE back then wasn’t possible to anywhere near today’s crazy levels. It can only exist when there’s enough government debt to monetize.
Today, the Fed and central banks around the world have had a mountain of government debt and government-backed mortgages to buy.
And since the tech bubble burst of 2000, it’s only risen exponentially — to over 100% of GDP for many nations.
To give you an idea, it looks like this: 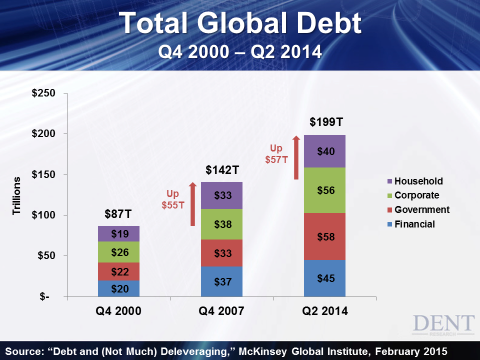 What was only intended to be used as emergency life support, has now been six years running.
Now debt, excess capacity, and speculation has risen to the most unprecedented extremes in all of modern history.
Global debt is $57 trillion higher than it was in late 2007, at a massive $199 trillion and rising.
When we include financial assets like stocks and bonds we have $247 trillion in total financial assets to deflate. And again, $100 trillion or more of that is likely to disappear in the next several years, resulting in massive deflation.
The money that has been created by QE isn’t real. It’s an illusion cleverly crafted to stimulate the financial markets.
Central banks have tried to keep the bubble going by creating even more money beyond what the global banking system did in the bubble boom.
It’s the banks that create almost all of the money, not the Fed… but the Fed creates the environment that stimulates such lending through setting short-term interest rates and reserve requirements. The government stimulates lending by guaranteeing bank deposits and mortgages.
Now, with mountains of debt, over-speculation, and an economy that has never really had a chance to reset since 1983… how do you think this will all work out when it finally does?
Badly… likely the worst in modern history. Protect the financial assets you have NOW!
Research Report
analyst ratings
blogger opinions
investor sentiment
news sentiment
analyst ratings
insider activity
hedge funds
stats charts
You May Also Like