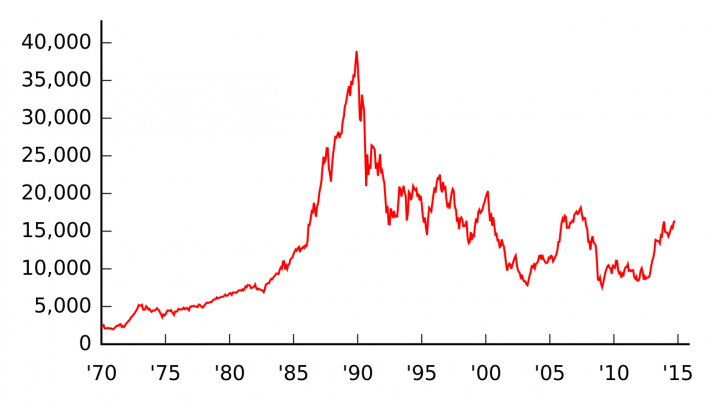 Source: Wikimedia CommonsJapan’s economy has been stagnant for about 25 years. The country is facing 3 issues that threaten to further weaken the country’s economy.

Japan has the highest debt to GDP ratio of any country in the world. Japan is more indebted than both Zimbabwe and Greece. The country’s debt to GDP ratio is currently well over 200%. The image below shows Japan’s almost continuous rise in debt as a percentage of GDP over the last 35 years.

Japan’s birth rate is lower than its death rate. One million babies were born in Japan in 2014 while 1.27 million people died. For comparison in 2010 (the most recent year with data for both birth and death) 4 million babies were born in the United States and 2.468 million people died. The Japanese population is expected to decline from 127 million today to 97 million by 2050.Population decline means less productive citizens generating fewer new ideas, businesses, scientific advances, products, and services. Population growth is a net positive for the economy. Population decline hurts economies.Population declines by themselves are troublesome. Declining population coupled with rising debt is even more troublesome. As debt grows while the number of citizens shrink, each Japanese citizen will have a more onerous debt burden. The percentage of tax revenue from each citizen that goes to paying interest on debt will keep rising as the population decreases.

Where AFLAC Fits In

AFLAC Incorporated (NYSE:AFL) is a an accident and health insurer publicly traded on United States markets. The company generates about 75% of its premiums in Japan, with the remaining 25% coming from the United States. AFLAC is the global leader in Cancer insurance. AFLAC is a Dividend Aristocrat thanks to its 32 consecutive years of dividend increases.Japan’s perilous economic condition could potentially impact AFLAC in two ways. First, negative population growth could slowly reduce the company’s customer count and premium income. Secondly, Japan’s quantitative easing and ultra-low interest rates are impacting the company’s interest income.

AFLAC’s annual premiums in Japan grew at an annualized rate of 5% a year from 2005 through 2014. Japan’s population declined by 0.1% a year over the same time. AFLAC managed to grow premium revenue at about 5 percentage points ahead of population growth in Japan in the last decade.Japan’s population is projected to decline from 127 million today to 97 million in 2050. This comes to an annualized decline of about 0.8% a year. If AFLAC continues to grow its Japanese premium revenue at 5 percentage points ahead of inflation, the company will see Japanese premiums increase 4.2% a year over the long-run. Premium growth is not earnings-per-share growth (as will be discussed in the ‘AFLAC’s Future’ section of this article).Premium growth of 4.2% a year does not take into account inflation. When AFLAC grew Japanese premiums by 5% a year from 2005 through 2014, the average inflation rate in Japan was 0.21% Removing inflation, AFLAC grew Japanese premiums by a real rate of 4.8% a year from 2005 to 2014. Adjusting again for negative population growth, AFLAC’s base long-term growth rate for real Japanese premiums is about 4%.

AFLAC has grown earnings-per-share at 10.3% a year over the last decade. The company’s 10% earnings-per-share growth is extremely impressive given the time period. Interest rates have fallen significantly over the last decade, and the Great Recession damaged many insurers.AFLAC has achieved its growth by finding innovative new sales channels in Japan and repurchasing shares. The company sells insurance in banks and post offices in Japan, as well as through traditional agents. These new product distribution channels have helped AFLAC become the global leader in cancer insurance.AFLAC has almost no equity securities in its investment portfolio. The company makes up for this by repurchasing a tremendous amount of its own stock. The company has reduced its share count by an average of 2.75% a year over the last 2 years. AFLAC’s share repurchases help boost earnings-per-share numbers.AFLAC will grow significantly faster than premium revenue grows thanks to share repurchases. If the company’s combined ratio stays constant and premium revenue grows 4%, the company’s operating income before investments will grow 4%. AFLAC can and does use a sizeable portion of this income to repurchase shares, growing earnings-per-share faster than premium revenue.Japan’s stagnant economy is no cause for concern for AFLAC investors. On paper, the company must translate its Japanese earnings into dollars. In practice, the company does not do this. In the long-run, underlying business growth will determine the value of AFLAC shares, not currency fluctuations.AFLAC is a high quality business with a long history of rewarding shareholders. The stock ranks highly using The 8 Rules of Dividend Investing thanks to its solid growth over the last decade, above-average dividend yield of 2.4%, and long history of dividend increases.