Quick SPDR S&P 500 ETF Trust (NYSE ARCA:SPY) forecast update:  Back on November 10th 2014 we predicted a spring 2015 high of 2181 in the SP 500, and so far this is still on track.  We came up with this figure via Elliott Wave analysis and wave structures of this  bull market cycle , coupled with Fibonacci relationships to prior waves and sentiment measures as well.  We believe markets and sectors move mostly based on human behavioral patterns, and we find them and ride the trend until the pattern is near exhaustion. Knowing that it was extremely likely to see 2181 based on Human Behavior characteristics has kept us with our foot on the pedal for almost 6 months now.  Now the key is to find the next sectors about to take the baton in the event we see the SP 500 running higher to the 2525 level which is our 2016 forecast, but one week at a time.

Rotation is key to catch if you want to consistently outperform the market indices year after year.  We didn’t say it was easy, we said its key to catch.  That of  course is the hard part, otherwise we’d all be sipping drinks on the beach right?  With that said, at SRP and SR services we have at various point in the past few years been aggressive in Shipping, Precious Metals, Coal, Biotechnology, Technology, Chinese Growth Stocks, Software, Security and more.  Where you can get the most upside and or Alpha is finding the emerging sectors, especially if they have been out of favor for awhile, or lagging the indexes like the SP 500, iShares Russell 2000 Index (ETF) (NYSE ARCA:IWM), NASDAQ etc.

We think a few of those sectors currently are Financials and Natural Gas just to name a few.  At the SRP service this past week we deployed money into two stocks in these sectors late in the week.  A Financial stock in the midst of a dramatic turnaround in profits and likely PE ratio which soared 20% in the 48 hours after our report.  The other being one of the larger producers of Natural Gas soaring 6% Friday alone after we got long as a swing position.  Those two positions alone produced enough gains to cover a few years of SRP service in just 48 hours.  So again, the key is to find the emerging sectors that investors have shrugged off or are not paying attention to and then pounce on them before they do. We have another Financial stock we are working on research on now that we believe has 160% upside in the coming twelve months, join SRP before that report goes out this week (likely Tuesday morning).

Recently, quite a bit of turmoil for example in the Biotechnology sector which we have been riding more or less since late 2013 with picks like Intrexon Corp (NYSE:XON) at 19-21 which ran as high as 50, Coherus Biosciences Inc (NASDAQ:CHRS) at 14 which ran as high as 32, Trevena Inc (NASDAQ:TRVN) at 5.75 which traded 35% higher recently 3 weeks after our report, ZIOPHARM Oncology Inc. (NASDAQ:ZIOP) which was up as much as 55% from our 8.80 report in early February before slamming the brakes, Juno Therapeutics Inc (NASDAQ:JUNO) which we made 20% on in 4 days from 49.50 to 58 many weeks ago. CLDN which ran as much as 66% in 8 weeks from our report at 17, when we sold 1/2 at 26 in early March and you get the idea.

So what do we make of the Biotech correction in April?  Well, short term it was much needed due to high RSI levels, hugely bullish sentiment readings, and the plethora of IPO’s that were rolling out every other day.  We got out of most positions prior to the big slide in early March and some after that, but we got caught in the downdraft with a few for sure like many did.  Nobody catches all the bottoms or the tops, us included.

Right now in the short term you should assume that there will be some winners running up into the ASCO conference at the end of May. In fact, so many names in the sector have been slammed so hard in the last few weeks you may be able to make some really nice swing trades over the next few weeks and get some serious Alpha. For one, witness the decline in JUNO the former market darling that went from  66 to 42 recently  in a few weeks. 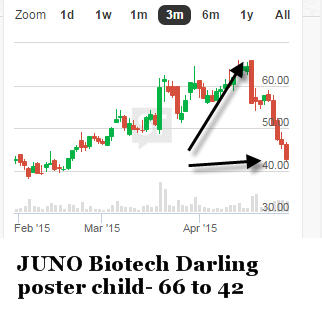 The market has quickly re-priced for risk in these Biotech names and the easy money has been made. So what we are doing at SRP service and SR service is to look for the emerging and overlooked sectors like Natural Gas and Financials for example (amongst others) and then look to exploit the sectors to find the most under appreciated stories with catalysts and valuations that are attractive. To be sure, when we were recommending blueBird bio Inc (NASDAQ:BLUE) at $23 in late May 2014 on stockreversals nobody was that interested in Biotech at the time, it had just gone through a tough 8 week window.  The stock has gone from 23 to 138 per share, truly remarkable. In November of 2014 everyone overlooked an IPO from Coherus (CHRS), except for us because nobody was paying attention to Biosimilars. We recommended the stock at 14 and it soared 7 weeks later to 32 for a 130% gain before we advised on stocktwits at 31 it was time to take profits.

Sometimes you have to sit through a downdraft and of course you may get caught with a few stocks that are giving you some drawdowns, that is where the fundamentals are crucially important. One of the things we always look for is the background of management, their prior track record of successes, also the investors in the IPO and Pre-IPO stages and the track record of their investments either soaring or being bought out.  When you read through IPO filings and then do some digging on who the top percentile owners are, you can find out some really good nuggets of information.  We always read the IPO prospectus as well and look to see what the cost basis is for pre-ipo shareholders, and to find out if any of them are adding to their share count in the IPO itself.  We look at share structure, percentage held by management and Pre-IPO investors, and comparative valuations.  We do this because if we do get caught in a downdraft we didnt get out of in time, we can have some confidence that those positions have a good chance to come back.  As it stands, small to mid cap names as a rule are extremely volatile by nature… so make sure you feel comfortable with the fundamentals and valuation, share structure, ownership etc before you invest.

The Biotech sector can be viewed best by watching the IBB ETF.  We believe the 200 day moving average at 308 is the key area to hold, and unless that is broken this appears to be a normal ABC correction.  Here is a chart we sent out earlier in the week to SRP members.  So far so good in in terms of holding that line you see. 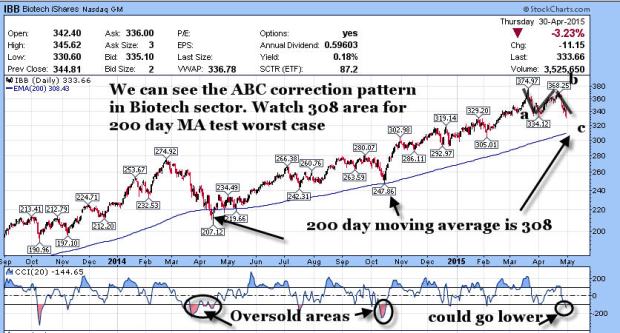 In the meantime, here is a fresh list of 12 names from which we will do further due diligence at SRP and consider one or a few for swing positions near term if they meet our criteria.