The growth was due in large part to synergies from the Alliance Boots acquisition.  Cost savings from the deal reached a combined amount of $1 billion in the quarter.

Walgreens plans to propel growth again with another large acquisition.

Walgreens owned and operated 8,173 stores in the United States, the U.S. Virgin Islands, and Puerto Rico according to its 2015 annual report.

Rite Aid has around 4,600 stores.  The acquisition of Rite Aid will grow Walgreens’ store count by around 50% if it doesn’t have to divest any stores.

The market viewed this news favorably.  Walgreens stock was up around 2% following the announcement.

The Rite Aid acquisition will provide further growth for Walgreens.  The company is expecting to reach $1 billion in synergies within 4 years of the acquisition.

Walgreens is a high quality business in a growing industry with global scale.  The company is a low risk investment (as far as equity investing goes).

With that said, the company is not without risks.  Changes in government and 3rd party reimbursement levels for prescriptions could negatively impact the company’s profits.  The health care industry in the United States underwent significant changes with the 2010 Affordable Care Act.  Health care reminds a hot political topic.  Changes in health insurance and government involvement in health care could be detrimental to Walgreens.

If the Rite Aid acquisition does not pass regulatory hurdles, the company would likely see its stock price decline.

None of the risk factors facing Walgreens today appear particularly severe or likely.  As discussed above, Walgreens is a relatively low risk stock.

Walgreen’s competitive advantage comes from a mix of its global scale and convenient locations.

The ‘cornerstore’ drugstore approach has managed to successfully compete with both big box retailers like Wal-Mart and Target, as well as with online giant Amazon.

This is because the cornerstore/drugstore combination is especially convenient.  Walgreens typically looks for locations on the corners of major streets.  This makes it easy for customers to ‘stop in’ (or use the prescription drive through) to pick up prescriptions or miscellaneous over-the-counter medicine, food, or tobacco products.

Walgreens has historically performed well during recessions.  The company’s earnings-per-share fell just 7% during the worst of the Great Recession.  People must fill their presciriptions regardless of the overall economic climate.  This provides a steady flow of customers to Walgreens, even during recessions.  The company’s performance over the Great Recession and subsequent recovery is shown below:

The company has compounded its earnings-per-share at 9.8% a year over the last decade.  Growth has come from a mix of organic expansion and acquisitions.

Not only does prescription use rise with age, it is also rising in general in the United States. 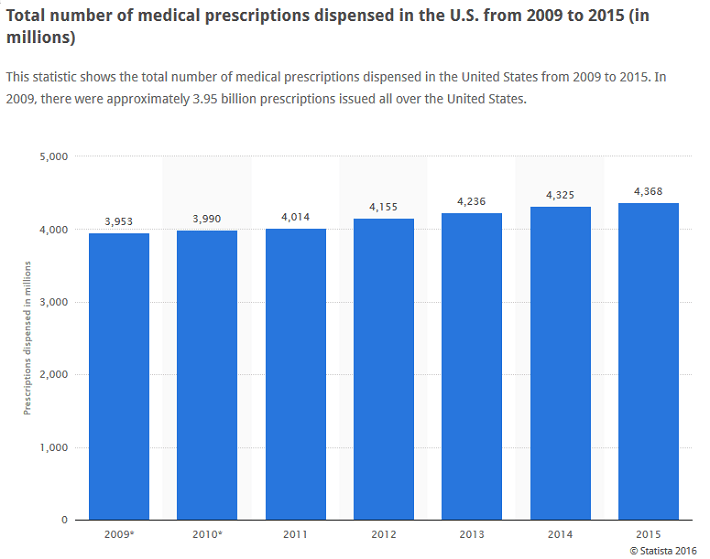 This trend is likely to continue as medical advances continue to push the boundaries of what prescriptions can treat.  More people with access to health care will also cause prescription use to increase over time.

Going forward I expect Walgreens to continue compounding its earnings-per-share at around 10% a year going forward.  This growth combined with the company’s current 1.8% dividend yield gives Walgreens investors an expected total return of around 12% a year moving forward.

Walgreens has historically traded for a 1.1x multiple to the S&P 500’s price-to-earnings ratio over the last decade.

The company is currently trading for an adjusted price-to-earnings ratio of 19.1 using adjusted earnings-per-share.  The company appears to be undervalued relative to the S&P 500 at current prices.

Walgreens has traded for an average price-to-earnings multiple of around 19 over the last decade.  The company is trading around fair value using its historical price-to-earnings ratio.  It is likely undervalued relative to the market today.

Walgreens is a relatively low yielding Dividend Aristocrat.  The company’s safety and growth prospects more than make up for its mediocre yield.  Walgreens is a good candidate for a low yield stock to include in your dividend growth portfolio.

The company is operating in a growing industry.  It trades for a reasonable valuation.   It has a strong potential growth catalyst in the pending Rite Aid acquisition.   I believe Walgreens is a buy at current prices for long-term investors.