Dividend Investors Should Consider Wal-Mart Stores, Inc. (WMT) as a Core Holding in Their Portfolio; Here’s Why

Owning Wal-Mart Stores, Inc. (NYSE:WMT) stock has been very lucrative for long-term shareholders. Every $1 invested in Wal-Mart stock in August of 1972 is worth $1,763 today (including dividends).  That comes to an annualized return of 18.6% a year.

Wal-Mart is a compounding machine with a shareholder friendly management.  The company has increased its dividend payments for 43 consecutive years.  This makes Wal-Mart 1 of 50 Dividend Aristocrats – S&P500 stocks with 25+ years of consecutive dividend increases.

Despite long-term success, the company has struggled in recent years.  This article analyzes Wal-Mart stock in detail, including:

Earnings-per-share for the company from fiscal 2014 onward shown below:

Clearly, Wal-Mart has not delivered growth over the last several years.  The company is not expected to eclipse former earnings-per-share highs until fiscal 2020.

What went wrong with Wal-Mart?

The company’s growth slowed dramatically in fiscal 2014.  By Fiscal 2015, earnings-per-share were declining.

The problem is declines in both net margins and in sales.

The deep decline in margin is due to 2 factors:

These two factors are responsible for Wal-Mart’s decline in net profit margins.  Both are strategic directions taken by the company’s management.  The reasons why these initiatives were taken are discussed in the growth prospects section of this article.

Margin declines are the primary driver of Wal-Mart’s lower earnings-per-share.  Revenue peaked for Wal-Mart at around $485 billion in fiscal 2015.  We are in fiscal 2017 now, and annual revenues are around $482 billion.

Revenues have stagnated.  Part of this is due to market saturation.  Wal-Mart cannot expand much in the United States due to its past success…  It simply has too many stores already.

Contrary to what many people think, online purchases are not the cause of Wal-Mart’s revenue stagnation:

I believe Wal-Mart has struggled with revenue growth due to an unmotivated work force, stores that are not as clean as rival Target (TGT) and other retailers, and well noted stocking problems.

With Wal-Mart’s recent struggles, why should investors consider Wal-Mart?

Wal-Mart has shifted its focus over the next several years away from maximizing earnings-per-share and towards maximizing revenue growth.

To this end, Wal-Mart is investing $2.7 billion over the next 2 years into its employees in the form of higher wages and better training.  The company has boosted all employee wages in the United States to $10 or more an hour.

Wal-Mart’s goal is to create a motivated work force that better serves its customers.  The large investment in employees is the single largest reason why earnings-per-share have declined for Wal-Mart stockholders.

In addition to investing in employees, the company is also investing heavily in digital growth.

To this end, the company has acquired a slew of smaller tech companies.  Wal-Mart Labs is the company’s tech hub based in San Bruno, California.

The company is currently the 3rd largest global online retailer, behind only Amazon and Apple.

Wal-Mart expects rapid growth in its e-commerce operations over the next several years.  Investments in digital/e-commerce sales are a long-term commitment.  Digital operations are expected to post operating losses through fiscal 2019 as they scale.

Wal-Mart is taking on unprofitable operations today to grow the business into the future.  The company’s goal is to provide a seamless shopping experience, both on-line and in store.

In addition to its employee raises and digital investments, Wal-Mart is also rolling out more of its neighborhood market concept stores.

The neighborhood market store is Wal-Mart’s version of a tradtional grocery store. The stores are much smaller than Wal-Mart’s flagship Super Centers.

Wal-Mart’s management has ‘reset’ the comapny.  Wal-Mart is positioned for faster growth over the next several years than the previous 3 or 4.

In addition, Wal-Mart plans to repurchase $20 billion in shares over the next 2 years.  This is ~9% of the company’s market cap at current price.  Share repurchases should normalize at around 2% to 3% of shares outstanding a year over the long run.

Wal-Mart also has a 2.8% dividend yield.  The company’s revenue growth, share repurchases, and dividend combine to give investors expected total returns of about 8% to 10% a year over the long-run.  Returns could be a bit higher of margins improve over time (which is likely).

Total returns of 8% to 10% a year may not sound amazing, but they are around historical long-term S&P 500 averages – and higher than what the S&P 500 is expected to generate at current prices.

Return should never be considered outside of risk.  Wal-Mart is one of the lowest risk, recession proof investments around.

Wal-Mart is well-known to provide every day low prices.  The company’s focus on price appeals to consumers of all income levels – but especially to those at the lower end of the United States’ economic spectrum.

Somewhere between 15% and 20% of all food stamp benefits in the Untied States are redeemed at Wal-Mart.

When money is tight, people tend to shop at Wal-Mart more than other stores.  This makes Wal-Mart an ideal recession stock.  Wal-Mart is one of the 10 most recession proof Dividend Aristocrats.

The Great Recession showed the strength of Wal-Mart in recessions.  The company’s earnings-per-share through the Great recession are shown below

Take a look at the earnings-per-share of the S&P 500 over the same time period for comparison:

In 2008, The S&P 500 fell 37% while Wal-Mart stock gained 21.6% thanks to higher earnings and an influx of new investors fleeing to one of the few businesses that was still seeing earnings-per-share growth.

Wal-Mart’s low-price business model rolled through the Great Recession as if it didn’t’ even happen. The average business in the S&P 500 suffered significant earnings declines.

Wal-Mart did well during the Great Recession because of its reputation for low prices.

The competitive advantage that insulates Wal-Mart from recessions is examined in the next section of this article.

Wal-Mart has a strong scale based competitive advantage. The company has over 11,000 locations around the world – including ~5,000 Wal-Marts and Sam’s Clubs in the United States.

The company uses its unrivaled scale to force suppliers into lowest possible prices.  Wal-Mart’s extensive distribution network efficiently distributes goods to its locations.  Goods are sold to customers at ‘every day low prices’.  The lower the company’s prices are, the more customers it gets, driving down prices further in a virtuous cycle.

Wal-Mart’s competitive advantage is very easy to understand. The company’s business model is not overly complex.  When a business is straightforward, there’s less chance for error as there are less ‘moving parts’. 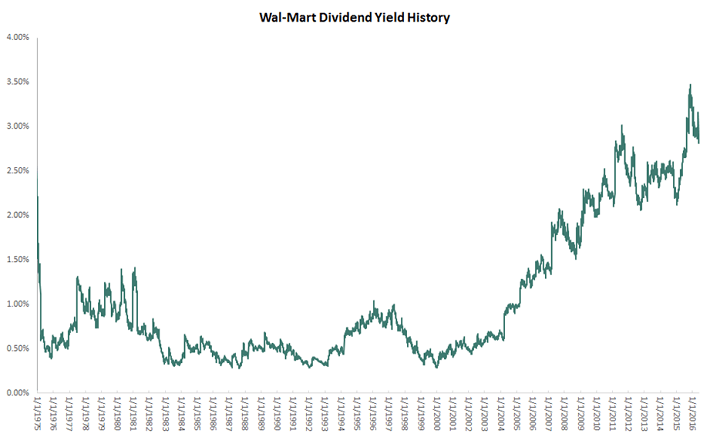 Wal-Mart stock’s yield has been rising as the company has slowly increased its payout ratio from around 25% to around 50% of earnings over the last decade.

The company’s price-to-earnings ratio has also declined, resulting in higher yields.  The company currently has a 2.8% dividend yield which compares favorably to the company’s historical average.

Investing in high quality businesses when they are at or near their maximum historical dividend yield tends to produce excellent long-term results.

The S&P 500 is currently trading for a price-to-earnings multiple of 23.8.  Applying Wal-Mart’s 10 year historical discount to the S&P 500, this implies a fair price-to-earnings ratio of around 19.0 for Wal-Mart stock.  In today’s low interest rate, overvalued market, Wal-Mart looks undervalued relative to the market.

Based on this, I believe Wal-Mart to be either slightly undervalued or trading around fair value on a long-term historical basis.

Wal-Mart is a favorite of The 8 Rules of Dividend Investing due to the financial metrics below:

The company is the dominant player in its industry.  It has a strong competitive advantage.  It thrives during recessions.  In short, Wal-Mart is a very high quality business.

The company is trading around fair value at current prices on a historical basis.  I believe an investment in Wal-Mart at current prices is likely to outperform the market over the long-run because Wal-Mart is historically fairly valued (or slightly undervalued), while the overall market is overvalued.

Investors looking for dividend growth, safety, and a shareholder friendly management should consider Wal-Mart as a core holding in their portfolio.

Amazon (AMZN): The Ant and the Elephant Story

Walmart Inc (WMT): This Bull Is Getting Nervous