Visa Inc (NYSE:V) kicks off the second peak week of earnings season with its fiscal fourth quarter report this Monday after the market closes. This comes just days after American Express posted better than expected results on both the top and bottom line. Amex made its biggest improvements by reducing the amount of provisions for losses on its balance sheet. This means that the credit company was expecting fewer losses from customers defaulting on their payments. Assuming this carries over to the rest of the industry, Visa should be in for a strong report.

Analysts at Estimize are calling for earnings per share of 74 cents, 20% higher than the same period last year. That estimate has increased by 2% since Visa’s most recent report in July. Revenue for the period is estimated to increase by 17% to $4.22 billion, marking a significant jump from previous quarters. A large portion of this increase is attributed to the recent acquisition of Visa Europe for $23.4 billion. Shares are up 6.5% year to date and historically increase 1-2% immediately through the print. 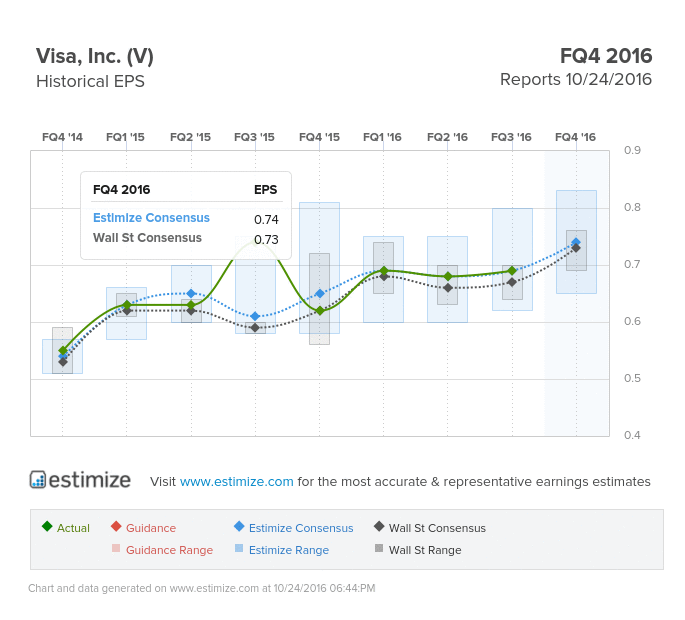 The credit card industry is going through an expansive overhaul given the rise of new technologies. Merchants are now more than ever moving away from legacy contracts towards mobile payments. Some of this includes the emergence of payment apps like Square and Venmo but also the increasing adoption of Samsung and Apple Pay. Visa’s stake in Square and recent partnership with PayPal should help them remain relevant as technology becomes a bigger part of the payments space.

Meanwhile, Visa’s first quarter partnered with Costco is proving to be favorable. Costco recently said that about 85% of the 11.4 million co-branded American Express cards have been changed to Visa card and activated. An additional 1.1 million members have applied for the new card since the transition.

There still remains a handful of near term headwinds impacting the credit space and Visa. Volatile exchange rates, Brexit uncertainty and weaker spending habits could all dent Monday’s results.