Verizon Communications Inc. (NYSE:VZ) is one of the largest telecommunications companies in the world. The company currently has a market cap of $192.9 billion.

Prior to July 3rd, 2000, Verizon was known as Bell Atlantic. Including Bell Atlantic’s dividend history, Verizon has paid steady or increasing dividendssince 1984.

Investors looking for stability should look no further than Verizon. The image below shows Verizon’s dividend history since 1984: 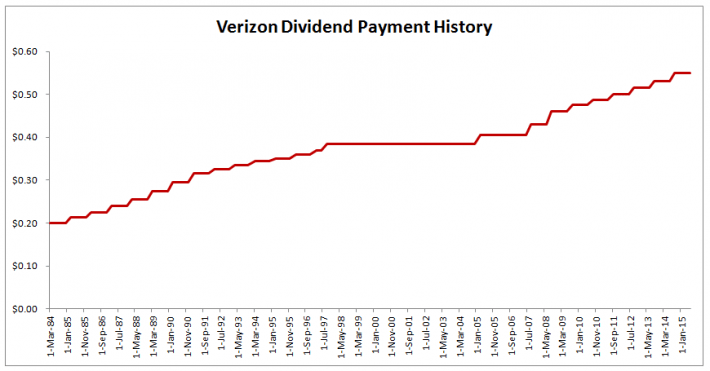 This makes Verizon Wireless an ideal candidate for retired or soon-to-be retired investors seeking both stability and yield. Click here to see 12 other high quality dividend stocks for retirement.

Now is not ‘the perfect time’ to buy Verizon stock, but that doesn’t mean it is a bad time, either. The image below shows Verizon’s dividend yield fluctuations over the last decade: 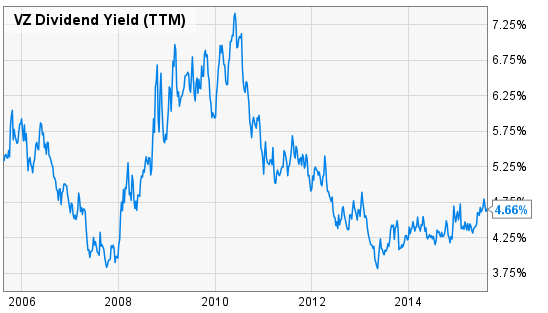 The best time to buy Verizon was in 2010. At that time, the stock could be purchased at yields of 6% – and even briefly above 7%. Stock don’t become undervalued because everything is going well.

In 2010, Verizon’s dividend payments were very much in question. The company had a large debt load, and GAAP earnings had been reduced due to the Great Recession – which had reached its bottom only a year earlier. The company had a payout ratio over 200%.

As we all know now, Verizon did recover. The company continues to pay increasing dividends to this day.

Today, potential investors in Verizon no longer face the uncertainty investors in 2010 did. What makes Verizon appealing today is its high yield despite the current low rate environment.

The image below shows the yield on 10 year U.S. treasury bonds, going as far back as the 19th century.

You can clearly see that we are a historically low yield environment. The 10 year treasury interest rate has only fallen since 2010. The only time in United States history that rivals today’s low rate environment is the early 1940’s – when rates were artificially reduced to support World War II spending.

Verizon still has such a high yield because management is committed to paying out the bulk of its profits as dividends. From 2005 through 2014, Verizon had an average payout ratio of 73% (using adjusted earnings).

Verizon’s high yield is attractive in today’s low rate world relative to other investments. On top of this, the company posted solid results in its most recent quarter.

Earnings-per-share grew 14.3% (using adjusted earnings) versus the same quarter a year ago. Verizon’s CEO Lowell McAdam had this to say about the positive results:

“Verizon has delivered another quarter of strong financial and operational results, based on consistent network reliability and superior value that continues to attract new customers… In the second quarter, we again balanced quality Verizon Wireless connections growth with low churn and profitability, and we announced and completed our acquisition of AOL. We’re now poised to offer customers exciting new over-the-top (OTT) mobile video services, and we look forward to a very positive second half of 2015.”

Earnings-per-share growth was a result of the following:

Verizon’s margin gains in its wireless segment were the biggest driver of favorable growth in the company’s most recent quarter. The company realized its lowest wireless churn rate in 3 years of just 0.9%. Churn measures the percentage of customers who cancel their service in a given month.

Over the last decade, Verizon has compounded its earnings-per-share at 3.0% a year. Dividends have grown at 3.2% a year.

Verizon’s management is expecting revenue growth of around 3.0% a year going forward, in line with historical growth. With continued share repurchases, the company should be able to compound earnings-per-share at a rate of 4.0% a year, not accounting for additional margin improvements.

In addition, the company is highly stable. Verizon’s 3 decade streak of stable or increasing dividends shows the company has reliably rewarded income investors. Verizon Wireless ranks in the top 30% of long-term dividend stocks using The 8 Rules of Dividend Investing thanks to its solid total return potential, low valuation, and stability.